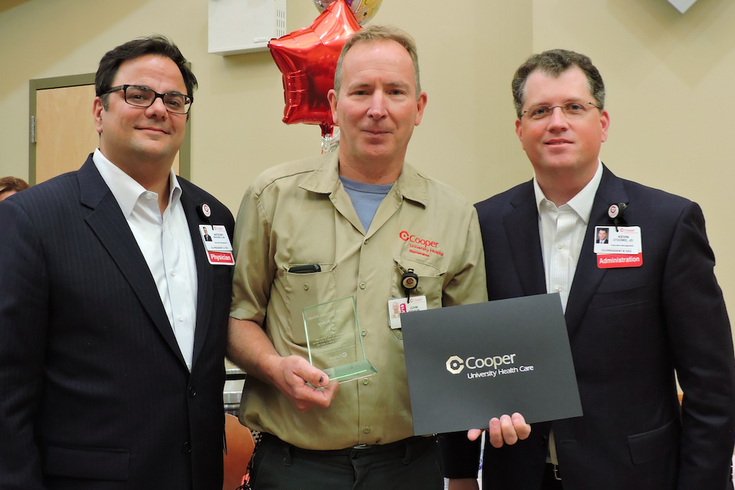 John Bishop, middle, an employee of Cooper University Health Care, intervened to save a woman from a sexual assault in June 2019. He's a 2020 finalist in the Citizen Honors category for the Congressional Medal of Honor.

A Burlington Township man who heroically intervened to save a woman from a sexual assault last year has been named a finalist for a Congressional Medal of Honor.

John Bishop, an employee at Cooper University Health Care, was driving home from his job last June when he saw a strange sight on Route 73.

A pair of arms reached out from a bush along the roadside.

Bishop backed his truck up and heard a woman screaming. He rushed over the guardrail and into the woods, following the sound until he saw a woman struggling to free herself from a man attempting to sexually assault her.

Bishop confronted the man, engaging in a fight and dragging him up to the road, where other Good Samaritans assisted in holding him for police.

The victim, who did not know Cramer, suffered non-life-threatening injuries.

“I’ll be honest, I was scared,” Bishop told the Burlington County Times last June. “But I’m glad I stepped in. At the time, I didn’t think about anything. I didn’t even think I would get hurt.”

Bishop, a member of Cooper's facilities management department, is among 27 individuals who could receive the medal in the Citizen Honors category at a ceremony on March 26.

“John is a true hero and deserving of this recognition," Cooper CEO Kevin O’Dowd said. "We are proud to call him a member of the Cooper family."

Disclosure: PhillyVoice Founder and Chairwoman Lexie Norcross sits on the Cooper Foundation board of trustees. Her father, George E. Norcross III, is the chairman of the Board of Trustees of The Cooper Health System.