Braddock mayor talks about seeking a seat on Capitol Hill as an outsider candidate, money and Bernie Sanders 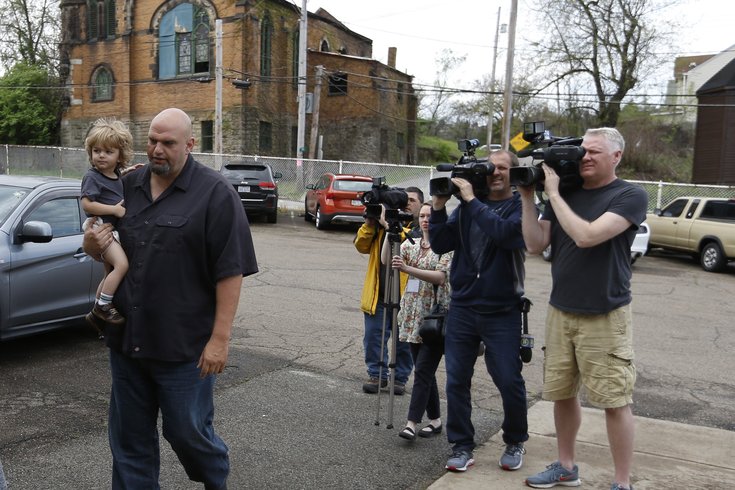 John Fetterman, the mayor of Braddock, Pa., left, and a Democratic Party candidate for the U.S. Senate, carries his 18-month-old son August, as he walks past photographers to vote on the morning of the Pennsylvania primary election, Tuesday, April 26, 2016 in Braddock, Pa.

About 16 hours after polls closed in a U.S. Senate race that would see him draw nearly 20 percent of the vote, John Fetterman took time Wednesday to discuss his takeaways from the campaign, Katie McGinty’s victory and what the future holds for a long-shot candidate who connected with a lot of supporters across the commonwealth.

He echoed some sentiments he offered during a Primary Night speech at The Brew Gentlemen taproom in Braddock, the western Pennsylvania town of which he’s mayor.

Some of those thoughts paralleled a pair of Tuesday night Tweets in which Fetterman maintained, “We have started a progressive movement here in Pennsylvania. It’s not going away. We’re not going away. This isn’t over. This is not how our story ends.”

Said Fetterman: “Of course we were in it to win it, but I’m ridiculously proud of the race we ran, and pulling 20 percent of the vote.”

From the onset of the campaign, the narrative held that Fetterman – a tattooed 6-foot-8 Harvard-educated Rust Belt mayor – was not your typical U.S. Senate candidate. That’s for good reason: He wasn’t.

“It would have been an honor to campaign with Bernie [Sanders]. That synergy could have helped him get to know the contours and nuances of Pennsylvania.” – John Fetterman

To hear Fetterman tell it to PhillyVoice, the outsider status didn’t exactly work in his favor in a political world apt to play it safe and give money to its chosen candidate’s campaign.

It also didn’t help – as I maintained last week – that Presidential candidate Bernie Sanders didn’t return the passionate support that Fetterman himself offered.

The 46-year-old York-native didn’t rue the results. (McGinty won with more than 42 percent of the vote with Joe Sestak finishing second -- about nine points behind -- and Joseph Vodvarka siphoning off about 5 percent after being restored to the ballot.) But he did speak about the harsh realities he encountered along the way.

“It really just drove home the point of how important money is [in politics], and not in a good way, but in a pejorative manner where it’s really just one big perverse telethon when you get down to it. That, to me, is the one big takeaway. Anyone who pretends it isn't mostly about money is [laughs], well, I can’t fault them because I didn’t realize it [early on in the campaign] either.”

When asked if he realized, before Tuesday night, that things weren’t going to break his way, Fetterman noted that the impact of “some really crappy polls” most certainly didn’t help him get traction at a time when cash was being thrown in McGinty’s direction.

He cited a recent Monmouth University poll that had him getting 4 percent of the vote as “devastating.”

“No matter how much you push back against that junk, it’s out there. It hurts you with donors and it shapes how the media covers, and talks about, you,” he said. “I just wish I could sue [pollsters] for malpractice. I don’t know anybody who uses landlines in 2016. My parents have one, but don’t use it. Those polls caused a lot of damage. That’s one of the frustrating things from the campaign. Who’s going to write a check when polls have you so low? If we were polling at 20 percent early – where we thought we were – that would have changed things.”

Discussing a recent PhillyVoice column that held Sanders’ lack of down-ticket interest cost him dearly, he said it “would have been an honor to campaign with Bernie. That synergy could have helped him get to know the contours and nuances of Pennsylvania.”

When President Barack Obama – who Fetterman said he admires greatly – endorsed McGinty, he knew it could have a coffin-nailing impact on his chances. ("How can I compete against that?" he asked.)

As for McGinty’s looming battle with incumbent Republican U.S. Sen. Pat Toomey, he said that “Donald Trump being on top of the ballot” is a big asset for the Democratic challenger.

.@JohnFetterman thanks supporters at @BrewGentlemen in Braddock for helping him shatter expectations #PAsen pic.twitter.com/5BbD4dVPbM

Regarding his primary night promise to remain engaged in progressive politics, Fetterman admitted he didn’t “know exactly what that looks like yet,” but would figure it out and push forward.

“This was a sincerity play for me. The things I talked about in the campaign are things I care about,” he said. “My beliefs and convictions to these types of communities and the people who live in them remain unchanged.”

Fetterman is also proud of having gone from being a candidate with very limited cache (and money) to one who had an impact on drawing crowds thanks in part to an engaging social-media presence.

The one good thing about Tuesday’s loss, though, was how the results let him “give pollsters and (some members of the) mainstream media the middle finger and say, ‘OK, here’s 20 percent for you.’”

In an overarching sense, though, Fetterman remains happy, and proud, of what he accomplished over the course of the senate campaign.

“We had so many great events. I met a lot of great people. I’m nothing but grateful overall,” he said. “I’m proud of the body of work we left behind and grateful to the people who really got, and cared about, what we were trying to do. I have absolutely no regrets.”