John McMullen: Gaining an 'Edge’ on the Eagles' draft plan

The Eagles are all but assured to draft a defensive end in the first round... 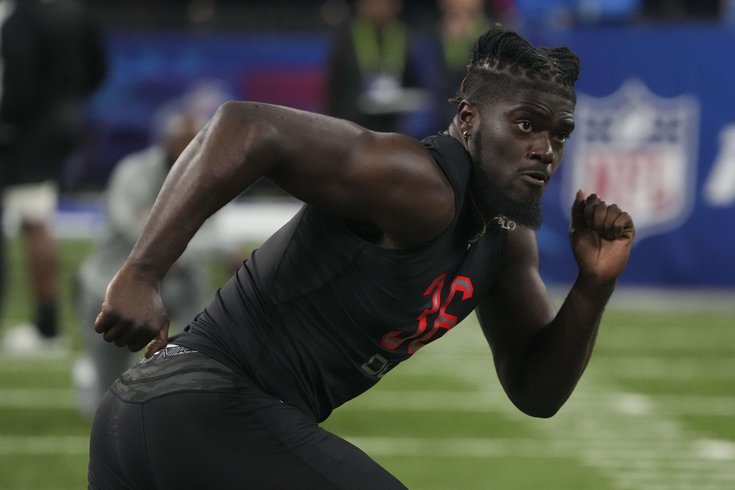 Is David Ojabo a possibility for the Eagles in the first round?

Howie Roseman rarely talks in absolutes and there are many good reasons for what is a sound philosophy in the ultra-competitive NFL but you witnessed the Eagles' GM getting as close to the mythical line of certainty as possible in Indianapolis last week.

And no, this isn't about what was essentially a necessary vote of confidence in the moment for third-year quarterback Jalen Hurts, it was the rather obvious hat tip to the 2022 draft class at edge rusher.

Remember that Roseman is very aware of missteps in branding by the organization over the years that are often taken like a baton by those outside the NovaCare Complex and rarely forgotten.

Jeffrey Lurie's "Gold Standard" flub is ironically the gold standard and has already had quite the shelf life while Roseman labeling Philadelphia a quarterback factory looks like it's going to give the former a run for its money.

Lesser highlights include the GM factory, which is actually holding up pretty well in recent years, and the GM calling the 2017 draft class historic at running back, something that had merit right up until the Eagles thought the depth extended to Donnel Pumphrey in the fourth round.

Roseman seemed to have flashbacks to that last week in Indianapolis when asked about the edge rushers at the top of the 2022 draft.

Roseman then looked off to the side and smiled at Eagles' PR whiz Bob Lange, whispering "famous last words. Definitely going to regret this."

But, Roseman likely will not.

There are few guarantees in life and maybe an edge rusher to Philadelphia in the first round isn't death and taxes just yet. That said, if you're feeling a little Babe Ruth-like in your latest meaningless mock draft, rest very comfortably in calling your shot by penciling in one of four names to Roseman and Co.: Michigan's David Ojabo, Georgia's Travon Walker, Purdue's George Karlaftis or Florida State's Jermaine Johnson.

An Occam's Razor evaluation is all you need.

Six edge rushers are projected in the top 20 of the draft by most reputable experts and the Eagles happen to have three of the first 19 selections to start the process (Nos. 15, 16, and 19). From there, you will quickly realize that edge rusher is a position in which Philadelphia has a need and value, just like the rest of the NFL.

From there you can kind of slot in the potential pieces.

Of the six potential options, two are presumably completely out of reach for Philadelphia, Michigan star Aidan Hutchinson and Oregon standout Kayvon Thibodeaux, players who are likely to be top-five picks.

Then it becomes a 'what flavor do you like' scenario, a favorite Roseman descriptor, for the teams in between.

If the Eagles play "Stand" Pat Gillick, they are certainly not going to have the pick of the litter and by No. 15 it could very well be down to two or even one of the top six. A run of all in the top 14 is what Roseman alluded to in his "famous last words" quip and it can't be completely discounted because of the value of the position.

Lots of excitement and anticipation for this EDGE group. We could see as many as six selected in the top-15. Travon Walker, David Ojabo, and Boye Mafe were three names that repeatedly came up from scouts. Expect ridiculous testing numbers from them all.

There should be a number of organizations that don't have the discipline to stay away from the adage that need is the worst talent evaluator in sports, however.

My best guess is that the Eagles would be down to the choice of Karlaftis vs. Johnson by their first pick unless a targeted move up the board is in play.

Any potential DeVonta Smith-like deal in that direction would likely target Ojabo, according to a former Eagles personnel executive who has a good understanding of what Andy Weidl and the scouting staff, especially defensive line expert Jeremiah Washburn, would like up front.

"I think Ojabo is the most realistic option," the former exec. said. "He’s super versatile and has a lot of Brandon Graham aspects to his game, which they’ll love. There’s a bunch of good options though. Travon Walker would be a bit of a departure for what they like with his bigger size, but he’d fit what they currently do."

What the Eagles currently do under defensive coordinator Jonathan Gannon is a nod to multiple fronts, in which five-technique and 4I are just as likely to be in the mix at times as the wide-9.

Walker, though, is a physical freak and seems to be on the way up the draft board not down it, although it's hard to imagine anyone else being Gannon's favorite

"It’s really a good thing that you can do all of that. If you can play defensive end at the University of Georgia, you can do a lot.”

Ojabo would seem to be the best compromise between the personnel department and the coaching staff, also a versatile player and one with a very high ceiling.

Karlaftis is another international product that reminds people of fellow Purdue product Ryan Kerrigan but not the 2021 version of Kerrigan in Philadelphia, the one that amassed 95 1/2 sacks over a decade in Washington prior to that.

Karlaftis also might serve as the safest route the GPS to the final destination offers, maybe not reaching the ceiling of a Walker, Ojabo, or Johnson as a prospect but possessing a much higher floor not to mention a plug-and-play potential from the starting blocks.

“One word: Relentless,” Karlaftis said when describing his playing style and success which he traces back to the strength in his lower body developed by treading water while participating in water polo as a young man in Greece. “That’s how I approach life, how I approach the game. In terms of my technique, how I play, my motor, my effort, everything about it.

Johnson isn't quite as finished after an internship that started in community college and passed through Georgia before an 11 1/2-sack explosion at Florida State.

"Some people are like, ‘Where’d this guy come from?’ I’ve been there all along,” Johnson said. “I finally got a chance to show that at Florida State. ... I think I’m the best edge rusher in this draft,"

There is no such thing as can't miss in any draft but the Eagles are set up for success with so many potential avenues.

The last hint the former Eagles' executive offered was recognizing the defensive issues from last season.

"Quick wins," the scout said. "Effort is great, but you need to be able to win quickly with how decisive quarterbacks are now."