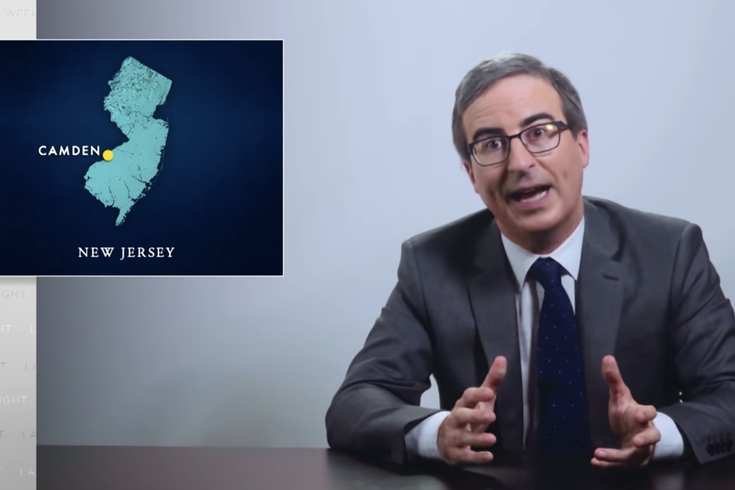 John Oliver on 'Last Week Tonight' talked about the protests taking place throughout the U.S. follow the killing of George Floyd and the reforms protesters seek. Camden, New Jersey, was offered as an example of a police department where reforms appear to be working.

As the police reform movement takes hold in the United States, again and again Camden is being pointed to as a city that has made some of these changes and is now benefiting. One of the latests instances happened on Sunday night's episode of "Last Week Tonight" with John Oliver.

In 2013, former Mayor Dana Redd and the City Council dismantled the Camden Police Department and its officers were required to reapply for their jobs. It's a measure that Minneapolis City Council now appears poised to take, following the death of George Floyd in police custody on May 25.

Officers in the new department, called the Camden County Police Department, are trained to use handguns and handcuffs only as last resorts, and police wear body cameras and GPS tracking devices, according to a report by CityLab in January 2018.

"It’s more of a protect-and-serve approach to dealing with the residents, rather than kicking down doors and locking our way out of the problem," Camden Mayor Frank Moran said in the article.

Scott Thomson, Camden's former police chief who retired last June, described during an interview on MSNBC on Monday that he also had to reapply for his job with the city's reimagined police force. Creating a department of all new employees was a key to Camden's plan working.

"The oppoortunity that really provided for us was the ability to build culture as opposed to changing it," Thomson said.

Another article last week by Bloomberg Businessweek, came days after Camden's Chief Joseph Wysocki, who is white, marched with protesters behind a banner that read, "Standing in Solidarity." It describes the focus by the Camden police on daily, noncrisis interactions with residents and how in 2019 the department began following an updated use-of-force policy. Those rules put a priority on de-escalation; the use of deadly force is a last resort.

On Sunday's episode, Oliver highlighted Camden as a city benefiting from broad, sweeping changes all at once instead of in small steps.

"The fact is the incremental reforms that we've tried — like the wide-use of body cameras and implicit bias and use-of-force training — are not on their own going to cut it," Oliver said. "In many cases, you're contending with an entrenched police culture resistant to any effort to compel reform. That is why many are advocating that we re-think the police from the ground up."

By rebuilding the police department, Oliver said Camden has "been able to meaningfully shift the culture while also instituting policy changes that have lead to both a drop in excessive force complaints and some rebuilding of community trust. I'm not saying it's been easy, perfect, or even that it would work everywhere, but it should expand our idea of what is possible."

Sunday's episode was a primer on the policing reforms being sought by the Black Lives Matter movement, like the calls to defund the police.

"This clearly isn't about individual officers," Oliver said. "It's about a structure built on systemic racism this country created intentionally and needs to dismantle intentionally and replace with one that takes into account the needs of the people that it actually serves. This is going to take sustained pressure and attention over a long period of time from all of us."