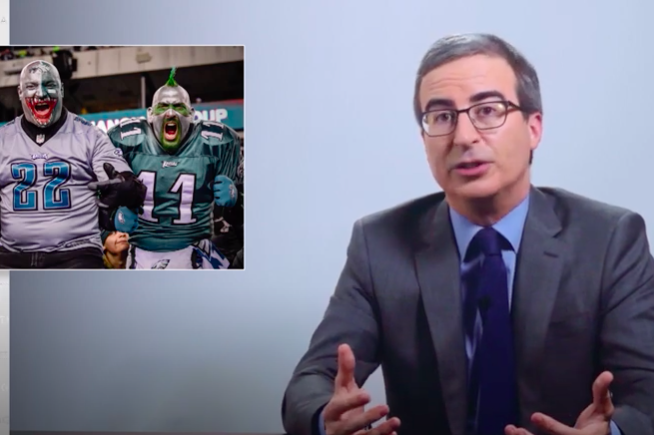 Comedian John Oliver took a shot at Philadelphia sports fans Sunday on "Last Week Tonight" as he detailed the challenges of restarting sporting events during the coronavirus pandemic.

But he remained fond of Gritty.

Without games being played, Oliver noted there are hundreds of thousands of stadium workers facing financial hardships. He singled out a couple of vendors at the Wells Fargo Center and Citizens Bank Park.

"It’s worth remembering that, although Philadelphia sports fans are a horde of inhuman monsters who deserve neither sympathy nor understanding, the people paid to tend to those monsters really depend on their monster money," Oliver said.

Oliver may consider Philly fans to be monsters, but he is ever impressed by the Flyers' mascot. He pointed to Gritty as a prime example of the way sports teams are engaging with fans during the indefinite lull in action, showing a video of the mascot's impressive bounce tricks.

“OK, I don’t know what’s more amazing here," Oliver said. "Gritty’s incredible eye-hand coordination, the fact he seems to live in an entirely empty apartment or the discovery that his body occasionally squeaks when it moves."

Sporting leagues have entertained the idea of playing games without fans, but simply ensuring the safety of players, coaches and other essential employees, like camera crews, is quite extensive.

Oliver picked apart one of Major League Baseball's proposals, a "bubble league" that would have isolated players and staff at spring training facilities in Arizona. In Germany, a rebooted soccer league already has run into problems, with two players testing positive for COVID-19.

“One of the things sports do best is bringing people together," Oliver said. "Unfortunately bringing people together is the exact thing we should not be doing right now. And while sports was genuinely helpful at the start of this crisis in showing how serious this virus was, if it comes back too soon and irresponsibly, it won't be an inspiration — it will be a cautionary tale."