The feel-good makeover show will have 10 episodes this season, making it the biggest ever 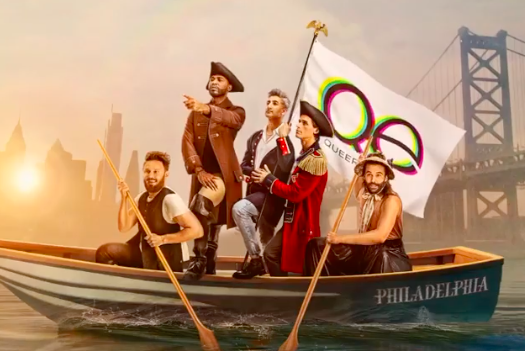 Netflix's hit show "Queer Eye" announced Season 5 will premiere on the streaming service on June 5. The new season of the feel-good show was filmed in Philadelphia.

UPDATE May 21: The trailer for "Queer Eye" Season 5 is finally here. In the new season, the Fab Five visit Philly to transform 10 people in need of some self-improvement. You can take a peek at what's in store with the clip below.

Original story: The Fab Five are returning to our screens in June and we'll finally get to see what Karamo Brown, Tan France, Antoni Porowski, Bobby Berk and Jonathan Van Ness got up to while filming in Philadelphia last summer.

The Philly-based season will have 10 episodes instead of the usual eight, but many of the other details remain a mystery.

There's no trailer yet, but "Queer Eye" did bless fans with an Instagram post featuring The Fab Five on the "Gayflower" in the Delaware River.

This Gayflower couldn’t hit land soon enough! ⚓️ Who’s ready for the season of brotherly love?!?! Grab your oars, a life vest, and an extremely absorbent box of tissues because Queer Eye Season 5 is arriving in Philly, June 5th! #QE5 ✨💖🌈 P.S. With 10 EPISODES, this is our BIGGEST season yet 🥳🎉

The new season is almost certain to have the same heart and positivity as the previous seasons in Georgia, Kansas City and Japan. So if you blubbered your way through past episodes, makes sure to have those tissues ready again in June.

Other new content coming to Netflix in June includes Greta Gerwig's Oscar-nominated "Lady Bird" (June 3), the fourth season of the controversial show "13 Reasons Why" (June 5) and the next installment of Ryan Murphy's comedy-drama "The Politician" (TBA).