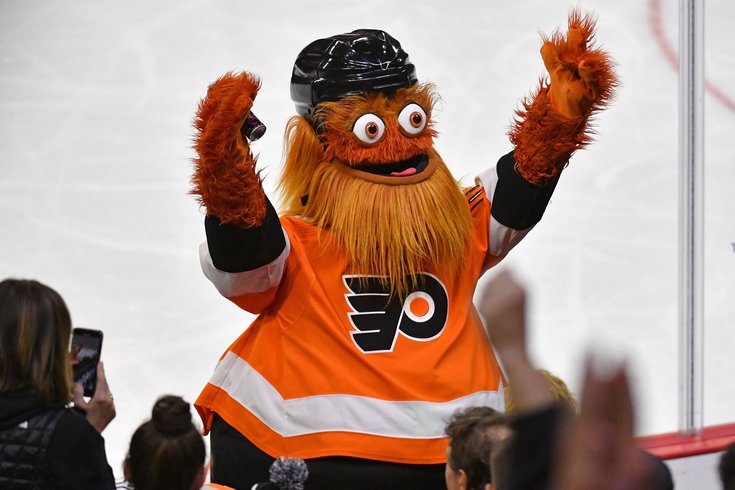 'Last Week Tonight' host John Oliver made fun of Philadelphia Flyers’ mascot Gritty being accused and then cleared of punching a 13-year-old boy.

John Oliver and "Last Week Tonight" were on winter break when Philadelphia Flyer's mascot Gritty was accused of punching a 13-year-old boy and subsequently cleared by Philadelphia police detectives of any wrongdoing.

The situation became comedic fodder for late-night shows, the likes of Conan O'Brien and Saturday Night Live, and it looked like Oliver – who has used Gritty as a punchline on before and featured a fake Gritty during a live performance at The Met – may have missed his chance.

During the beginning his HBO show, Oliver touches on a number of news topics before diving into the main segment of the episode. Gritty was part of his opening joke on Sunday.

"We have to get to the biggest story of the break," Oliver said. "What happens when an obvious criminal sociopath is accused of abusing his power, yet somehow holds onto his office by sailing through a sham investigation?"

While many would assume Oliver was talking about President Donald Trump's acquittal of all charges from his impeachment trial, the show instead cuts to a clip of a news anchor talking about Gritty.

After the ancho describes Gritty's eyes as "googly", Oliver jumps back in to take down the mascot.

"I'm not sure that googly is the best way to describe Gritty's eyes at all. Deeply psychotic? Sure."

Oliver continues with his bit, but given its NSFW nature, you can watch the video below to see the rest of what he had to say about Gritty's eyes. You'll see that the camera simultaneously zooms in on Gritty's eyes in step with Oliver's rant.

Damn John Oliver...that’s just wrong. 😆😆. The charges against THIS #OrangeFace...I never believed it.

The OTHER more psychotic orange-face - Well he did say “I could shoot someone on 5th Ave. & get away with it.” Sadly it might be true. #JohnOliver #LastWeekTonight #Gritty pic.twitter.com/bxaHUZTord

The comedian then makes the long-teased comparison of Gritty to Trump and dives into the president's impeachment trial and acquittal.

However, Gritty wasn't out of the woods. Oliver delivered the haymaker moments later.

"And like the child who was definitely punched in the back by a googly-eyed fur demon, we cannot say that we didn't see this coming," Oliver said.

It's safe to say, despite being a free mascot now, Gritty will always continue to be the butt of jokes on late night shows.