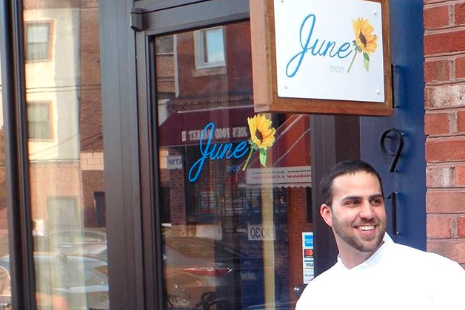 The ongoing game of musical chairs being played by a handful of Philly's French-inspired BYOBs is, for now, coming to an end this month.

June BYOB, at 1911 East Passyunk Ave., will open on Wednesday from industry mainstay Richard Cusack. Cusack, previously of Le Bec Fin, Bibou, the Dandelion, Parc, and was even Joel Embiid's personal chef, is combining classic and contemporary cuisine in his latest venture.

A preview of the menu posted to the restaurant's Instagram account shows that offerings will include black bass with watermelon and beets, seared foie gras with peach jam, braised rabbit leg with chanterelle mushrooms and salt crusted branzino for two.

With what the neighborhood gains with June BYOB, it's losing with local favorite Townsend, which is relocating to the Rittenhouse area in mid-September.

Check out our menu 👀 The menu is updated monthly so make sure you book your reservation so you don't miss out on some of these amazing dishes! #junebyob #frenchrestaurant #menu #appetizers #entree

And June BYOB's space was previously home to Will BYOB, which closed in April after seven years on East Passyunk Avenue. Will BYOB's Chef Christopher Kearse is slated to open his next venture in French dining, Forsythia, in Old City on Friday Aug. 23.