Jeffrey Stockbridge will display his work at a Drexel University exhibition starting Jan. 25 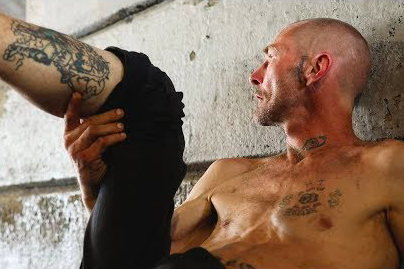 Jeffrey Stockbridge/Embdedded in the Badlands

For the last decade, photographer Jeffrey Stockbridge has been a resident portrait artist of the heroin crisis gripping Philadelphia's Kensington neighborhood.

Primarily working in the medium of pictures, Stockbridge has built personal relationships that bear truth to those living with addiction, with each other and without much else.

The "Kensington Blues" project, which took shape as a blog in 2011, transformed Stockbridge's work into a book that collects his most poignant images and journal entries from the denizens of Kensington Avenue and its surrounding encampments.

Now for the first time, teaming up with reporter Courtenay Harris Bond, Stockbridge has directed his first documentary film work on various aspects of the deadly epidemic.

"This has been an experiment and an experience," said Stockbridge, whose "Embedded in the Badlands Series" will be part of a larger exhibition opening Friday at Drexel University's Paul Peck Alumni Gallery. "There are certain videos you should make because they can say more than a photograph. They show the brutality of it and how bad it is."

In recent years, the local statistics of this epidemic have grown more stark than they've ever been. The 1,217 Philadelphians who died of unintentional overdoses in 2017 marked a 34 percent increase over the previous year's death toll. An estimated 1,110 people lost their lives to overdoses in 2018.

Nationally, that number ballooned to about 49,000 overdose deaths from opioid use and exposure to the synthetic opioid fentanyl, which accounted for about 30,000 deaths.

"I don't think there's a bag of heroin in Kensington that doesn't have fentanyl in it," Stockbridge said.

The seven mini-documentaries released this week shine a light on the personalities and daily struggles of people living with addiction. Their moving and disturbing testimonies contain stories of hope, survival, kindness, fear, loss, community and recovery.

The "Badlands" project began in January 2018 during Philadelphia's first Point-in-Time-Count of the city's homeless population, an annual volunteer initiative that occurred again just this week.

Stockbridge rode along during the count with a housing coordinator from Prevention Point, the private nonprofit that has led the way in offering services to those struggling with addiction and homelessness, and decided to just see what happened when he turned on the camera.

"Filming that night made it clear that spending time with these people and witnessing what they're going through is a valuable experience for others to see," Stockbridge said.

From there, the series expanded into a collaboration with Harris Bond and video editor Hunter Siede, who drilled down hours of footage into seven vignettes.

The individuals shown in the series range from young to old and show different states along the continuum of addiction and recovery.

Donald, a 69-year-old man who kicked heroin, now works a full-time retail job as he recovers with Suboxone treatment. It took him nearly 40 years to turn his life around.

"Three things happen to you," Donald said. "And I learned this the hard way. It's institutions — prisons, a nut ward — or death. One of them, I was headed for, and mine was prison."

Stockbridge isn't entirely comfortable with the notion that he's "humanizing" heroin addiction and homelessness. He sees their place in Kensington as part of a larger set of forces he's observed and watched change over the last 10 years.

"I'm interested in telling a complex story, a story that can be contradictory," Stockbridge said. "I'm not set, by any means, with an agenda. I just like the people I'm spending time with. I think they're genuinely good people. I think they're just living in some f***ed up circumstances."

The city's response in Kensington over the last two years has increasingly made efforts to remediate the crisis a matter of politics and community engagement.

From working with Conrail in 2017 to clear the infamous "Gulch" — an open-air drug market also known as "El Campamiento" — to the ongoing evictions at underpass encampments, Philadelphia's actions come with consequences that Stockbridge feels are rooted in larger issues.

In one of the videos, the graffiti on the walls of an underpass repeats the protest message, "Eviction = Death."

"There's a ripple effect," Stockbridge said. "It comes back to the question of whether homelessness is a crime. Neighbors might tolerate two or three tents. They won't tolerate 30."

But while many have assumed the tent encampments are a byproduct of clearing the Gulch, Stockbridge sees property development in Kensington as an equal if not greater factor.

"There are fewer abandoned houses in that neighborhood now with expansion of development in Fishtown and Kensington," Stockbridge said. "I can point out speciifc houses where people were living there — no water, no heat, nothing — and now those people are living outside."

Whereas Stockbridge used to spend most of his time taking photos in these "abandos," his work now is almost all shot outside.

"These changes are exposing it more," Stockbridge said. "People are resilient. They find ways and places. I think some of the housing issues are very relevant to why this crisis has spread."

Philadelphia officials touted a number of positives from clearing "hotspot" encampments on Kensington Avenue and Tulip Street to taking down names, getting people IDs, directing them to respite housing and getting some to enroll in treatment.

The challenge is that for those who live every day "in the moment," as one of Stockbridge's subjects says, the city's interventions are often merely moments.

"A lot of these people want some stability in their lives," Stockbridge said. "They know they're homeless, but they don't want to have to move every day. At any moment's notice, somebody could come along and tell you that you have to move. They'll ask if you want treatment, and people will say, 'F*** off.'"

What Stockbridge mosts wants to see is the introduction of the controversial safe injection sites that have been backed by Mayor Jim Kenney and former Gov. Ed Rendell. Advocates refer to the proposed locations as overdose prevention sites, contending that medical supervision of those struggling with opioid addiction will minimize fatal overdoses and increase chances of recovery through central access to services.

Philadelphia, which would become the first city in the country with such safehouses, has faced stiff resistance from former U.S. Deputy Attorney General Rod Rosenstein. Locally, Seventh District Councilwoman María Quiñones-Sánchez and State Rep. W. Curtis Thomas have expressed opposition to the initiative.

Stockbridge believes his exhibition at Drexel can awaken a broader public discussion about how to address the crisis he's tried to influence through art.

"Right now is the time for people to start paying attention," Stockbridge said. "You've got homeless drug users living underneath disgusting, moldy, wet bridges. And they're letting other people stick needles into their necks. That's how badly they need the drug. That is how little control they have over their addiction. It's like, how are you going to stop the bleeding?"

The Drexel exhibition, "Kensington Blues," will feature photography, two hours of looped audio interviews, the "Badlands" videos and journal entries that together place substance abuse in an immersive — if unsettling — dialogue with visitors.

"This is as much about what's happening in Kensington as it is a look at the way it's represented in art and media," Stockbridge said. "So much of this work is about really understanding and conveying the experience."

While Stockbridge plans to remain focused on photography, he said he also would love to continue exploring the documentary-style format of his collaboration with Harris Bond and Siede.

The Drexel exhibition opens with a reception on Friday, Jan. 25 from 5-7 p.m. in the gallery at the southeast corner of 32nd and Market Streets. It will remain open through Saturday, March 30, with an artist talk on Thursday, Feb. 7, from 6-7 p.m. and a panel discussion on Wednesday, March 20, from 6-9 p.m.

You can learn more about Jeffrey Stockbridge's work here.