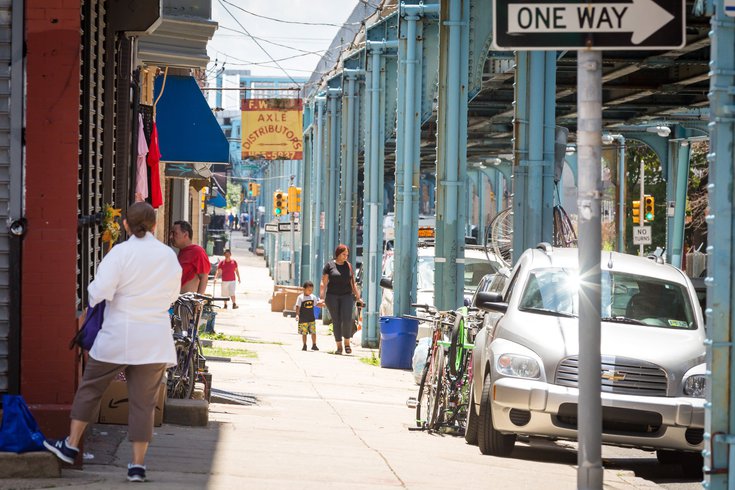 City Council introduced a resolution on Thursday urging Mayor Kenney, Gov. Wolf, and the General Assembly to declare a state of emergency for Kensington amid a 'humanitarian emergency' in the community.

Philadelphia City Council is urging Mayor Jim Kenney, Gov. Wolf, and the state's General Assembly to declare a state of emergency and provide additional support for Kensington amid a "humanitarian emergency" in the neighborhood.

Councilmembers Allan Domb, Maria Quiñones-Sánchez, and Mark Squilla introduced a resolution urging state and local leaders to address the crisis in Kensington and seek emergency funding to clean up the neighborhood as it bears the brunt of the opioid epidemic in Philadelphia.

"My colleagues have put a great deal of time and resources into addressing the many complex issues that have consumed Kensington for far too long," said Domb. "Despite the city's countless efforts and those efforts made by many amazing community-based organizations and residents, we must acknowledge that our approach isn't getting the results Kensington deserves. This has become a disaster of epic proportions — a disaster that requires relief efforts that far exceed the capacity and resources of city government."

The resolution claims that, despite the efforts the city has made to address the crisis impacting Kensington, it has failed to provide effective policy to put more people in addiction treatment and clean up the neighborhood. Council said that the crisis has exceeded the city's capacity to handle individually.

A spokesperson for the city said that they are supportive of all efforts to gain additional resources for the city, adding that any efforts must include authentic community input. The spokesperson said that the city will work with community organizers in Kensington and Harrowgate and with Councilmember Domb to determine the best course of action for making a declaration of the sort.

Kensington has been at the center of the conversation surrounding Philadelphia's opioid crisis for more than a decade, though the community once sported a vibrant working-class community living close to now-shuttered factories in the neighborhood.

Gov. Wolf signed a statewide disaster declaration in January 2018 to help the state fight the opioid crisis, said Elizabeth Rementer, the governor's Press Secretary. Since then, it has been renewed 15 times, most recently in August 2021. The General Assembly declined to extend it further, and it expired on Aug. 25, 2021.

Many of the factories were closed by the 1950s and 1960s, and a shifting demographic landscape and subsequent race riots led to an influx of abandoned homes in the neighborhood. Drugs entered the community shortly afterward, and became a major part of the economy in the area.

Though drugs had already infiltrated the small neighborhood by the beginning of the crack epidemic in the 1980s, that is when the community became synonymous with the drug market, according to Jerry Daley, executive director of the Liberty Mid-Atlantic High Intensity Drug-Trafficking Area Program.

Daley told the Inquirer in 2018 that the crack epidemic is what gave Kensington its oft-referred nickname, "the Badlands."

When heroin and prescription opioids became popular in the community in the 1990s, the drugs were also becoming popular recreationally around the United States. When pharmaceutical manufacturers began urging doctors to prescribe opioids for pain, there was a massive push to over-prescribe the habit-forming medications.

When people were no longer able to receive refills on their opioid prescriptions, many began filtering into Kensington's open-air drug market. When fentanyl entered the community, the city's overdose rate skyrocketed. In 2020, there were 1,214 overdose deaths. 81% of them included fentanyl, which the U.S. Drug Enforcement Administration lists as the city's leading drug threat.

"Kensington is subjected to conditions unimaginable anywhere else in Philadelphia," said Quiñones-Sánchez. "We need all hands-on-deck, at every level of government, to support neighbors and families and address this public health and safety crisis with meaningful relief measures, policy change, and restorative community investments."

In 2016, Mayor Kenney implemented a task force to find solutions to the ongoing crisis in Kensington and clean up the neighborhood.

When Mayor Kenney issued a disaster declaration in the neighborhood in 2018 through the end of 2019, the administration sought to close widespread homeless encampments and offer drug addiction treatment to residents, and clean needles and other drug paraphernalia from the streets on a cycle for much of the year.

Community organizations and other nonprofits have also worked to support residents in the community, offering clean needle exchange programs, homeless shelters, and other harm reduction strategies aimed at reducing the number of overdose deaths in the neighborhood and the city at large.

In 2021, a proposal to open Safehouse, a supervised injection site, was shot down in federal court following backlash from Philadelphia residents.

The harm reduction method, in which people are able to inject drugs in a sterile, medical environment with staff able to provide resources on housing, workforce development, and recovery, has seen major success in communities around the world that have adopted it. New York City became the first place in the country to open a safe injection site in 2021.