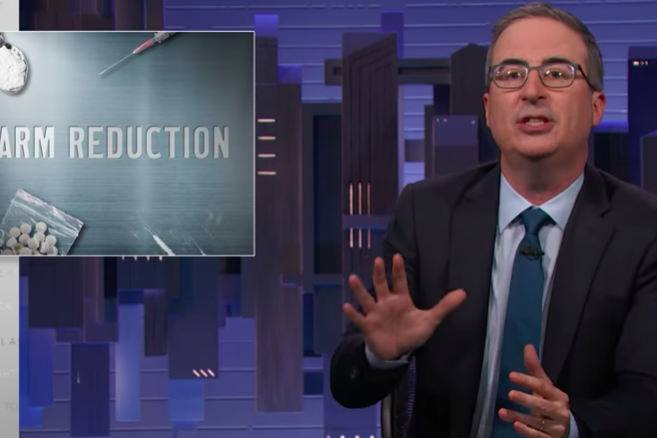 In Sunday night's episode of 'Last Week Tonight,' John Oliver used the debate about the proposed supervised injection site in Philadelphia to illustrate the need for the U.S. t5o rethink how harm-reduction services can be used to address opioid addiction.

In 2021, a federal appeals court shot down a proposal to open an opioid overdose prevention site – also known as a supervised injection site – in Philadelphia, on the basis that it would violate the federal law that prohibits the operation of a facility for the purpose of using drugs.

The the facility, which was to be known as Safehouse, became part of a broader discussion about opioids, addiction and harm reduction on the most recent episode of "Last Week Tonight with John Oliver."

At the time of the court's ruling, nearly every resident in Philly had an opinion on the supervised injection site plan, as advocates and opponents argued over the moral and legal implications made by opening what, at the time,, would have been the nation's first overdose prevention site. Later last year, New York City opened its own supervised injection site, providing a place for those who use heroin to do so safely.

Overdose prevention sites, which already exist in Canada and Europe, allow people to bring their own drugs into a facility that is staffed with medical professionals. There, people can inject themselves in a safe, clean environment, with staff on standby, who can assist if there is an emergency and provide resources to people who want help with recovery.

A lower court ruling in 2020 originally had allowed plans for Philly's first supervised injection site to move forward. The proposed site inside the Constitution Health Plaza, at Broad and McKean streets in South Philly, pulled out of the plans following backlash from community members.

Residents who opposed the plan argued the site would result in crime, litter, and increased police activity to the area. Though city officials tried to assure residents plans were in place to address those concerns, opponents to the supervised injection site felt as though the rushed planning process made it difficult to understand how the area would remain safe.

The circuit court ruling that halted the city's opioid overdose prevention facility in was among opioid-related topic Oliver discussed along with overdose deaths and facts and myths about fentanyl in presenting the argument in support of supervised injections sites.

"A supervised injection site in Philadelphia was prevented from opening after a three-judge panel found it violated a provision in federal law known as the 'crack house' statute," Oliver says. "The problem is often that people are so angry with those who use drugs, they want to punish them into abstinence."

Whether the federal statute makes the opening of supervised injection sites illegal continues to be debated. Oliver makes the point that the crack house law was written and passed during the War on Drugs in the 1980s, which was founded on the mistaken belief that drug addiction could be solved by arresting away the problem. The laws put forth during this time prohibited the use of drug paraphernalia, criminalized the use of many drug testing kits, and led to mass incarceration of people across the United States.

Oliver and other proponents of a harm-reduction approach accepts the reality that people are going to use illegal drugs, and that some people either cannot or don't want to stop using. While overdose prevention sites are one of the more controversial forms of harm reduction, others, like increasing the access and availability of Narcan – also known as naloxone – has become more common in Philadelphia and other U.S. cities.

In 2021, city health officials opened the first Narcan dispenser at a library in West Philadelphia, making the life-saving medication that reverses the effects of an opioid overdose more accessible to community members.

Other harm reduction services, like checking drugs to see what they actually contain, also have proven effective at keeping people safe. However, many drug testing kits and fentanyl test strips remain illegal in some parts of the country.

In a CNN clip Oliver uses in the segment, Svante Myrick, former mayor of Ithaca, New York, says the places where overdose prevention sites have been opened, "more people get off of drugs. People who use supervised injection are 30% more likely to enter into treatment."

Oliver ends the episode by offering solutions to change national public health policy surrounding supervised injection facilities and other harm-reduction services. Among them is encouraging the FDA to remove the prescription-only authorization of naloxone, which would allow it to be used more freely.

He also says state lawmakers should examine their state's laws regarding drug paraphernalia and adjust them to ensure people are not "held liable" for holding life-saving drug testing strips or kits.

Americans need a "full-throated endorsement" of overdose prevention centers from the Biden administration, Oliver says, in part because President Biden wrote the crack house legislation as a U.S. Senator. Biden should make a stand in favor of supervised injection sites – like the one proposed in Philadelphia – in order to move the needle in favor of the practice, he says.

The president has signaled support for syringe services programs, which provide clean needles to people who use illicit drugs. The programs have a proven track record at reducing disease and increasing public safety. By providing clean needles and allowing for those using injectable drugs to dispose of needles in a safe way, syringe services programs reduce the overall number of needles in a community.