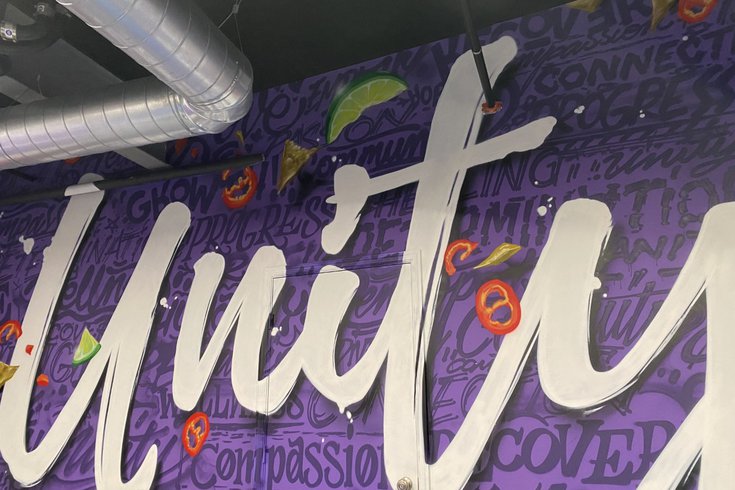 Unity Taqueria in Roxborough is one of five businesses operated by Robert and Arielle Ashford, founders of Unity Recovery, a nonprofit that support people confronting drug addiction and mental illness.

When Robert and Arielle Ashford established Unity Recovery in 2017, they set out to create a support services team that promotes community-centric recovery for people with mental health and substance-use disorders in the Philadelphia area. The two met while in recovery, and the idea to start the organization sparked after Arielle had attended a recovery-based yoga class in West Philly the previous year.

Their goal became a physical reality in 2019 when they opened Unity Yoga, the vinyasa-based studio and wellness center on Main Street in Manayunk, where the Ashfords saw tangible results of their efforts. In 2020, Unity Recovery expanded, adding another yoga studio in Chestnut Hill and leasing space on Ridge Avenue in Roxborough to open a new business venture, Unity Taqueria (or Unity Taco, as it's known to many neighborhood residents).

When creating the restaurant's staff, the couple prioritized hiring people who are confronting drug addiction and mental health issues and those who have re-entered society after being incarcerated, making true on the Ashfords' mission "to bring (recovery-friendly places) into the public eye."

"We've heard so many stories from family members who have lost people, or people in recovery themselves, saying that they finally feel seen," Robert Ashford said. "They're not relegated to church basements and hidden in society. They can come out and enjoy and live their lives."

Now Unity Recovery is poised to grow again. In the coming months a vegan restaurant and a coffee shop join the Ashford's collection of community hubs in Northwest Philadelphia.

The Volstead by Unity will be a vegan restaurant with a alcohol-free bar opening at 4371 Main St. Ashford said Unity is planning for a soft opening around Valentine's Day, with a more formal opening sometime in March.

"It's a full-service vegan restaurant in terms of the food," Ashford said. "Mixed with that, as we continue our mission and philosophy, both normalizing and providing unique opportunities to live and thrive for people who identify as 'in recovery,' who don't drink, or who are sober-curious. We're not just doing mocktails, we're working to re-create traditional cocktails with zero-proof alcohol, which are a newer intrigue in the drink space within the U.S."

Alcohol-free liqueurs have become more popular in recent years. Ritual, a brand of zero-proof drinks, are sold at Whole Foods locations and other small grocery stores around Philadelphia. Rather than being made with fruit juices and mixers, like mocktails typically are, zero-proof liqueur is designed to imitate the taste of booze without any alcohol content.

"In Philly, we still don't have what some people call 'sober bars' but what we're calling a zero-proof bar," Ashford said. "Some restaurants and bars in Philly are putting mocktails on their menu, but they're doing them as an addition." Volstead is different, he said, because it was created to be alcohol free to serve Unity's mission to create spaces for people in recovery.

The Ashfords' other new business is Unity Java, a coffee shop that will be at 5312 Ridge Ave. in Roxborough, a few blocks from Unity Taco. The building currently is under construction, but barring any additional delays due to the COVID-19 pandemic and supply-chain problems, it should be open by April or May.

Robert and Arielle chose these Northwest Philly communities as locations for their businesses after identifying a need there.

"We fell in love with the area as we were looking for places, but there's also not a whole lot out here," Robert Ashford said. "There is certainly a lot of community out here, but those community-based businesses in Philly tend to be located in South Philly, West Philly, and in the Kensington area."

With this growth comes the expansion of Unity Recovery's hiring practices and more job opportunities for people in recovery, those who have dealt with mental health issues and people formerly incarcerated. Unity partners with social service agencies and re-entry organizations which will refer potential hires to them.

No one is excluded from these job opportunities, but there is an expectation that to be a part of the organization everyone understands the mission and culture of these business concepts.

"About 80% of our staff hold those identities, and the remaining are in some way connected to the mission," Ashford said.

The United States has been grappling with the devastating effects of the opioid epidemic for more than 20 years, and recent reports note that nearly 1 million people have died from drug overdoses since 1999. The spike in use of fentanyl – a potent and deadly synthetic opioid – has led to an increase in overdose deaths in the Philadelphia region and the country.

According to city data, 81% of overdose deaths in Philadelphia in 2020 were linked to fentanyl.

The city has invested in harm reduction strategies and recovery-based initiatives to help support people with opioid addictions. These measures haven't always been popular. The proposal to open the city's first safe-injection site in South Philly – which advocates say would curb fatal overdoses by allowing people to use heroin in a clean environment surrounded by medical professionals – was met with opposition from some residents.

The plan for Philly nonprofit Safehouse to open the site ultimately failed when a federal court ruled the facility would violate federal law.

There are more than 14,000 drug-addiction recovery facilities in the United States, according to the National Institutes of Health. In Philadelphia, the Department of Behavioral Health and Disability Services has a list of resources and services available to those seeking help. From counseling, medication, behavioral therapy to case management, there is no shortage of ways for people to find the help.

That's because data on drug use and overdoses are the basis for creating – and funding – these support systems to help people substance-use disorders. STAT published an article by Ashford in 2018 in which he notes that while there is an emphasis on state and local governments reporting addiction rates, the same attention is not paid to keep statistics on rates of recovery from people who enter those facilities.

Focusing on addiction and overdose rates, Ashford and his colleagues write, often can "skew public opinion" and create governmental strategies that focus on simply preventing overdoses, rather than expanding to promote and encourage long-term recovery, too.

Along with pioneers in recovery-based data collection – including the Recovery Research Institute – Oregon became the first state to create a data collection program in partnership with the U.S. Centers for Disease Control and Prevention that included recovery rates.

"It's not just supporting the community, it's creating community where people who hold stigma or biases (about those in recovery) can come together," he said. "We learned this really quickly when we started the yoga studio. Building that community where all kinds of people can come together and interact and share those stories did a lot in service to humanize people who have been stigmatized for decades."

And for as long as Unity is successful building those kinds of communities, Ashford and his wife will to continue to expand the business.

"As a person in recovery, I want to be able to have the same type of experiences and feel safe in doing so, and feel like what I'm engaging in and spending money on is something that is actually made for me," he said. "Sometimes it doesn't always feel that way."