Kevin Cooney: The Phillies are so broken it's hard to figure out who to blame

The front office, manager and players have all changed, but the results remain the same as Phillies careen toward another September collapse. 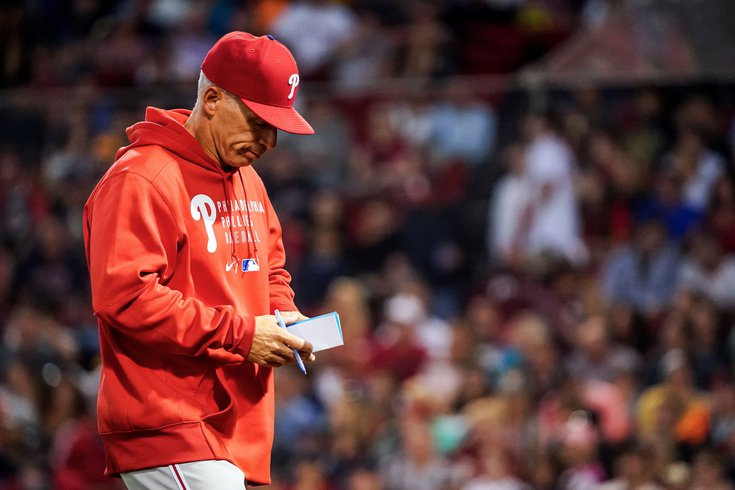 The story is way too familiar. It has become played out now over the past four Septembers of disappointment that are now recognized as part of the franchise’s DNA over this decade of futility.

The 2021 Phillies still have a mathematical chance much in the same way that a $20 bill gives you a chance at a Powerball jackpot. Deep down, you know when you see that $20 go into the machine at the local Wawa that you won’t get it back again. And that’s the point of the season we have reached with this team — the hope against hope that the ball bounces right for a few games in October and the process of sorting through the damage once again when it doesn’t.

Wednesday morning dawned with the Phillies losing four of five games at home to the Rockies and Cubs – two teams who are a combined 49-94 on the road heading into play on Wednesday. They finished the season series against Colorado and Arizona at 5-9. Those two teams are now a combined 62 games under .500.

Sure, there could be a run. They could go to Atlanta and win all three. Maybe San Diego, St. Louis and Cincinnati all collapse and fall into the sea. Stranger things in the sport have happened.

That’s not even the point right now. The point is more about a culture that has permitted this occurrence to keep happening repeatedly, through different managers and general managers. A farm system that is in a full-fledged famine of prospects. A high-water mark that keeps finding the same level – a few games above or below the .500 mark. And the endless cycle of doing dumb things at big moments.

An example of that last point: the Phillies have allowed 36 homers over the last three seasons (2019-20-21) with an 0-2 count – a time when no pitch should be anywhere near the strike zone. That includes five against the Rockies this past weekend. To put that in perspective, the worst organization in baseball may be the Pittsburgh Pirates. They’ve allowed just 18 combined over the last three years. (And by the way, that 36 number is skewed in this fact: just four of them took place during the 60-game season in ’20.)

Who exactly do you blame that on? The pitchers for missing spots? The pitching coach and catcher for calling the wrong pitches? Player development and scouting for not seeing the bigger hole here? In a lot of ways, it’s all of the above.

Realmuto has been behind the plate for 29 of the 36 homers (81 percent) on 0-2. That’s 81 percent of the total. He has started 74.4 percent (265 out of 356) of the Phillies games over the last three seasons. Does that instantly mean it’s the catchers fault? Of course not. But it certainly is something that should be examined — especially if that catcher is not setting his target in the right spot. Hell, Tony Pena used to sit on the ground in certain spots in order to make sure a pitch was buried in the dirt low. Still, no pitcher should be excused for not knowing to bury pitches in the dirt or throwing it far enough off the corners on their own to make a hitter swing.

These types of discussions must take place this off-season, an examination of a franchise’s culture and what causes it to trip over the ottoman in September repeatedly. The kneejerk is to fire coaches — to send Joe Girardi packing, bring in another staff and see if another voice will get more out of this core than the last guy did. That was the rationale with Gabe Kapler and Pete Mackanin’s firings. It was the excuse for when numerous pitching and hitting coaches left here with the issuance of a press release two or three days after the conclusion of a season.

This isn’t to say that getting rid of Girardi isn’t justifiable – you can certainly make the argument that the lack of young development is reason enough to make a switch. (It was the same issue that got Girardi removed in New York.) The question would be — would that really change a damn thing? The answer to that is probably no. As mentioned here last month, it is just another spin on the vicious cycle that this franchise is currently in.

Dave Dombrowski has already started to make some moves on the development end — and that’s where it must start. It must include a full housecleaning through the system and a recasting of how the franchise operates from scouting to on-field coaching at Clearwater, Lakewood, Reading and Allentown. There has to be a way to put a value on tangibles — like being able to catch the ball, the proper baserunning fundamentals or understanding not every situation is the same when you are standing 60 feet and 6 inches away from the plate.

The cycle has apparently not been broken. And the insanity of the last decade for this franchise would be running it back without major adjustments to prevent another collapse.