Scoreboard watching: Checking in on Phillies’ playoff chances with 19 games to play 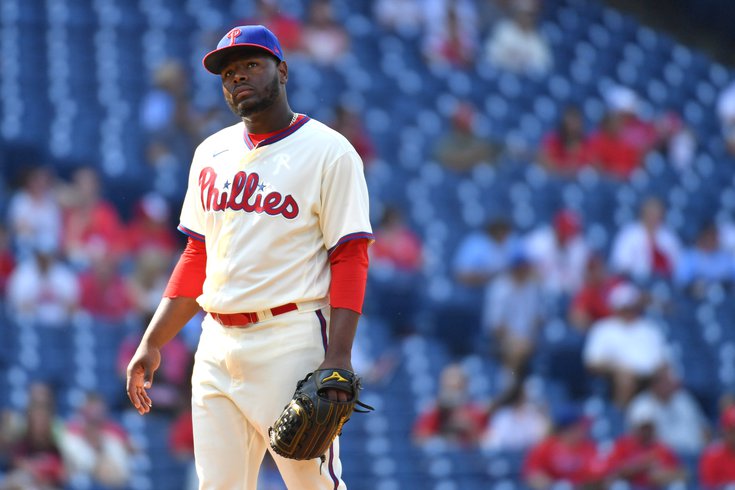 Can the Phillies bullpen keep it together for the last 19 games?

It was not a good week's worth of games for the Phillies.

After an understandable struggle against the NL Central-leading Brewers, the Phils dropped three of four against the mediocre Rockies, and with starting pitching hard to come by, they had to use not one but two bullpen games.

And yet, all is not lost.

Thanks to the futility of the teams the Phillies (72-71) are chasing for a postseason berth, they are still very much alive, with two avenues for getting into the season-ending tournament. Here's a brief look at who they are chasing and how they can achieve each.

This one seems to be a little harder than earning a Wild Card spot (which we'll document in a minute), but the Phillies do have a little more control here. That's because they face the Braves three times at the end of September, and in theory if they can close their current 4.5 game deficit a little bit before those games, they could make a realistic run at the a division crown.

Between now and what the Phillies hope is a meaningful series against the Braves beginning on September 28, Philly will host the Cubs three times (.451 win percentage), face the Mets in New York (.497), and then host the Orioles (.322) and Pirates (.364). An optimist would observe that they need to handle the games they should handle, and could have the Braves within arm's length.

What are their chances? FanGraph's analytics have the Phillies holding an 8.3% chance of winning the NL East while fivethirtyeight is slightly higher on Philly, giving them a 10% chance. Their NL East odds are +700 via Pointsbet, well behind Atlanta's -700.

The Phillies are much closer in the Wild Card race — back by just 2.5 games — but they don't have any head-to-head matchups with the Reds (2.5 ahead), Cardinals (2 ahead) or Padres (also 2 ahead) going down the stretch. Catching three teams most likely will prove to be more difficult a task — but they are aided by their easy schedule, in contrast to much tougher slates ahead for the aforementioned trio of teams.

Phillies fans will need to root against four teams down the stretch while hoping their own team gets it back on track following a much-needed day off Monday. Several key players, like J.T. Realmuto have been banged up of late, so perhaps the momentum can shift as the Cubs come to town for a series of evening games in South Philly.

Fivethirtyeight is slightly more confident in the Phillies ability to win the Wild Card slot (8%) than FanGraphs is (7%) but the Phillies will need to pull together a win streak here pretty soon to increase those odds. They have shown they can do it — with streaks of six and eight wins coming in the last month and a half. One more of those could be all the Phillies need to end their 10-year long playoff drought.