Authorities say the incident stemmed from a drug deal and the defendant, Jonathan Tunnell, was arrested near Philadelphia International Airport 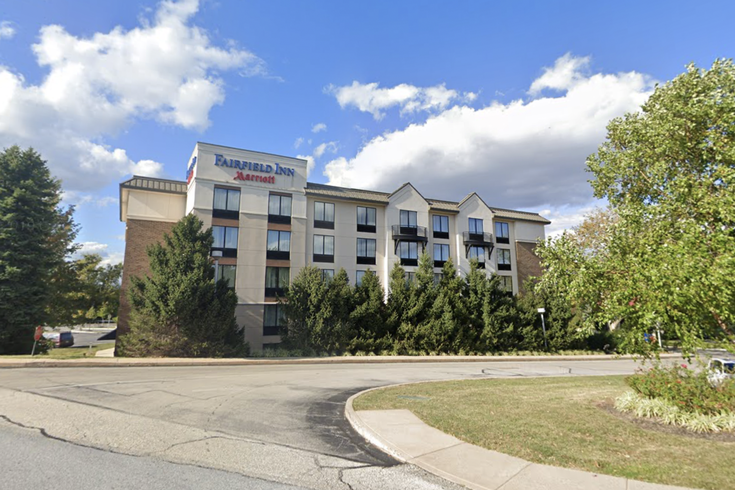 A man was fatally shot at the Fairfield Inn in King of Prussia on June 14. Montgomery County prosecutors say the shooting was related to a drug deal.

A Philadelphia man was arrested Wednesday in connection with the fatal shooting of a man at a King of Prussia hotel, where prosecutors say a drug deal went wrong on Monday.

Jonathan Tunnell, 40, has been charged with murder and related offenses in the shooting of 35-year-old Henry Palmen, who was found dead at the Fairfield Inn around 3:30 p.m. Monday. Tunnell was arrested by U.S. Marshals near Philadelphia International Airport after an investigation led authorities to identify him as the alleged shooter.

A maintenance worker at the hotel on Mall Boulevard, near the King of Prussia Mall, found Palmen unresponsive in his hotel room and reported a suspected drug overdose to authorities.

When Upper Merion police arrived at the hotel room, they found Palmen bleeding from a small bullet wound on the side of his head. Investigators said they found numerous packages of marijuana edibles and and a large amount of white and orange pills that have not identified, yet. There was no cash in the room.

A joint investigations by Upper Merion police and Montgomery County Detectives determined that Palmen had received the drugs via a shipment from California and planned to meet with Tunnell to sell the drugs.

Investigators reviewing surveillance video spotted Tunnell walking on Mall Boulevard toward the hotel prior to the shooting, authorities said and hotel employees said they also saw Tunnell enter the Fairfield Inn and get on the elevator.

Then about 20 minutes after Tunnell arrived at the hotel, he was seen walking quickly in the opposite direction on Mall Boulevard, police said.

Though Tunnell was masked in the surveillance footage, investigators said they were able to identify him using visible tattoos on both of his hands and cooperation from witnesses.

Tunnell's criminal history dates back to 1999, including a 2005 guilty plea to charges of attempted murder in Norristown. He was sentenced to 10-20 years in state prison and was released last August. He was on federal probation stemming to a drug case and state parole in connection with the Norristown arrest. He had been listed as a wanted person for parole violations.

"Upper Merion Police did an outstanding job in their immediate actions in the hotel room. They secured needed evidence to quickly solve this murder, which appears to have happened during a drug deal gone bad," Montgomery County District Attorney Kevin Steele said. "This defendant was just released on parole last August and was wanted prior to this murder for violations to his parole and probation. Excellent and fast police work, with help from U.S. Marshalls, got this dangerous defendant off the streets."

Tunnell remains held at the Montgomery County Correctional Facility ahead of a preliminary hearing on June 28.