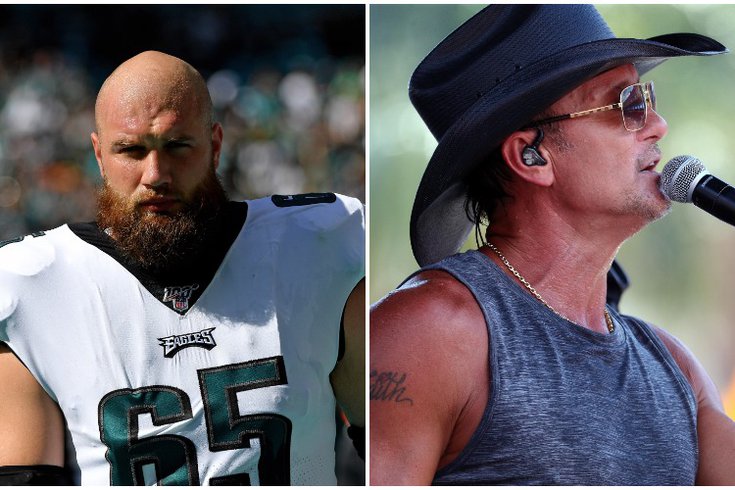 Lane Johnson and Tim McGraw both took time this week to thank health care workers on the front lines of the COVID-19 outbreak in South Jersey.

The last several months have brought unforeseen challenges to doctors, nurses and other medical professionals serving on the front lines of the COVID-19 pandemic.

Eagles player Lane Johnson and singer Tim McGraw each found ways to express their gratitude this week to the South Jersey health care personnel working during the coronavirus crisis.

Johnson, who is back in the region ahead of the team's training camp, paired up with Rita's Italian Ice to provide employees at Jefferson Cherry Hill Hospital with a cool refreshment Thursday.

Along with scooping water ice for nearly 200 hospital workers, a masked-up Johnson signed autographs and took photos. Some of the signed items included napkins, footballs, $1 bills, jerseys and, of course, an underdog mask.


Great stuff today with @LaneJohnson65 serving @RitasItalianIce to the heroes at @JeffHealthNJ in Cherry Hill. See more tonight @NBCPhiladelphia at 5 and 11. pic.twitter.com/6qj0E780oY

McGraw, an award-winning country singer, teamed up with Spotify on Wednesday to surprise a group of Virtua Health nurses.

Four nurses at Virtua Marlton Hospital, including two who were at home on vacation, hopped on a Zoom call expecting to see another work meeting. Instead, McGraw joined the call, leaving them shocked.

McGraw thanked the nurses for their service, telling them how they've inspired others. He then played his new single, "I Called Mama."

When you think @TheTimMcGraw, you probably never think he's gonna crash your conference call 😲 See him spread a little hope to frontline heroes in the latest episode of #TheDropIn pic.twitter.com/WJ6ZimAJl4

McGraw has a unique connection to the Philly region. His father, Tug, starred for the Phillies from 1975-1984 and helped the franchise win its first World Series title in 1980.