The measure, which was approved 107-85 along party lines, now heads to the state Senate; Krasner decried the removal effort as 'anti-democratic' 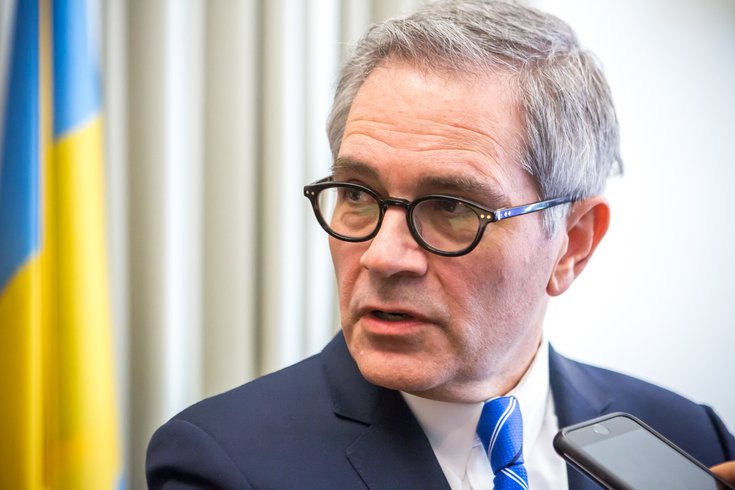 Pennsylvania's House voted on Wednesday to impeach Philadelphia District Attorney Larry Krasner for 'misbehavior in office.' The impeachment proceedings head to the Senate, where lawmakers will hold a trial.

Pennsylvania's House of Representatives voted on Wednesday to impeach Philadelphia District Attorney Larry Krasner, approving a resolution that accuses the city's lead prosecutor of not enforcing state laws and establishing policies that have contributed to a rise in violent crime in the city.

The House advanced the measure with a 107-85 vote, with the majority of Philadelphia's state representatives opposing impeachment. Rep. Martina White, the primary sponsor of the articles of impeachment, whose district includes most of the Northeast, voted to approve her caucus' impeachment effort.

The articles of impeachment will now move on to the Pennsylvania Senate, where lawmakers will hold a trial. Conviction and removal from office requires a two-thirds majority in the Senate. It is unclear when the trial would begin, as the state Senate held its last scheduled session on Tuesday, approving the next president pro tempore and Democratic whip.

Convictions on articles of impeachment is rare in Pennsylvania, where the legislative body has only removed one elected official in its 340-year history: Rolf Larsen, a former state Supreme Court justice was impeached in 1994 for a host of ethical violations.

"There is zero possibility of Krasner being removed by the (state) Senate," said Craig Green, a professor of administrative and constitutional law at Temple University. He noted that if the Senate does vote to convict and remove the city's lead prosecutor, it could "alter the character of the legislative system in Pennsylvania to a degree that would be unrecognizable."

In his view, there is no aspect of the impeachment effort that is not political, and many of the issues presented in the articles of impeachment are legislative, so there is little precedent for impeachment on those grounds.

This sentiment has been echoed by other legal experts, including by Mimi McKenzie, legal director at the Philly-based Public Interest Law Center. McKenzie noted in a written statement on Tuesday that "the House's attempt to remove a democratically elected local official because they disagree with his criminal justice reform policies must be called out for what it is. It is an effort to subvert the will of Philadelphia voters."

On Tuesday, the House Judiciary Committee voted to approve the articles of impeachment. The 50-page resolution details several of Krasner's actions and policies as district attorney, which the resolution's sponsors believe have contributed to the city's rise in crime.

These policies include not seeking cash bail for people charged with misdemeanors and nonviolent felonies, not prosecuting people for prostitution or marijuana possession, and considering a defendant's immigration status in the plea bargaining process.

The resolution paints a picture of a "city that has descended into an unprecedented crisis of lawlessness," describing violent crime occurring in all parts of the city at all hours of the day under Krasner's leadership, including on public transportation, near schools, and in populated neighborhoods filled with families.

In a press briefing following the introduction of the articles of impeachment in October, White and other House Republicans described Philadelphia as a crime-ridden city that has fallen into crisis due to Krasner's "progressive criminal justice philosophy that prioritizes criminals over victims," and used the city's homicide rate — which reached an all-time high in 2021 — as evidence of Krasner's failure in office.

"In the hundreds of years the Commonwealth has existed, this is the only time the House has used the drastic remedy of impeachment of an elected official because they do not like their ideas," Krasner said in a written statement following the vote. "Those ideas are precisely why Philadelphia voters elected and reelected me to serve as the Philly DA — in two landslides. ... History will harshely judge this anti-democratic authoritarian effort to erase Philly's votes — votes by Black, brown, and broke people in Philadelphia. And voters will have the last word."

Earlier this year, Krasner filed a lawsuit against the House Select Committee, after it met January to begin impeachment proceedings against the prosecutor. The Select Committee's webpage on the House Republican Caucus' website details "the case against Krasner," describing how its members believe Krasner's actions have led to the city's increase in gun violence and the shuttering of retail stores in the city.

In a letter to the Committee in October, Krasner noted that although the Committee was formed in an effort to curb crime in the state, it has "refused to investigate any other county in the Commonwealth, even though other counties have experienced greater increases in the homicide rate than that of Philadelphia."

The vote to impeach Krasner comes as it is yet to by determine which party will take control of the state's House of Representatives, based on the results of last week's elections, and just months before Gov. Tom Wolf's second term as governor expires.

Though Democrats in the House have declared victory, the party holds just 101 seats, while Republicans have 100. Two races have yet to be called — in Bucks and Montgomery counties — and both are only a handful of votes apart as of Wednesday afternoon.