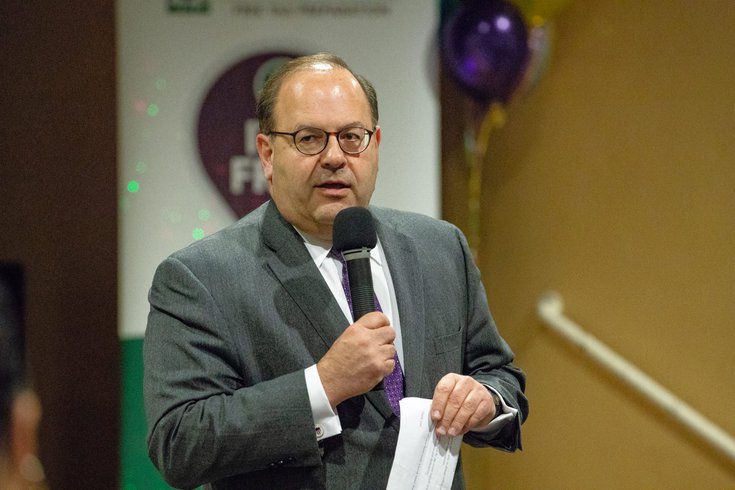 Allan Domb, the prominent real estate broker and former member of City Council, has announced he's running for Philadelphia mayor. Domb, a Democrat who served as a Councilmember from 2015 until his resignation in August, is focusing on turning the city around and address its crises in leadership, education, public safety and poverty.

Allan Domb, prominent real estate broker and former member of City Council, has announced his candidacy for mayor of Philadelphia.

Domb, a Democrat who served on City Council from 2015 until his resignation in August, was known primarily for his real estate holdings throughout the city prior to his political career. With Tuesday's announcement, Domb joins what is becoming a crowded race to succeed Mayor Jim Kenney, whose second term expires in January 2024.

In a campaign announcement video released on Monday evening, Domb outlined a platform focused on improving public safety for Philly residents and finding solutions to increased gun violence seen throughout the city over the last two years. He also intends to address the root causes of crime through investments in public education.

"Over the last few years, Philadelphia has been in a public safety crisis," Domb said in the video. "We need to protect our communities by rebuilding trust in our law enforcement and investing in anti-violence programs that actually work. And we have to address the root causes of crime. It's time to stop pointing fingers and start solving problems."

Domb began hinting at a mayoral run earlier this year, and was one of several members of city government to call for Kenney's resignation in July, after Kenney said he looked forward to no longer being mayor during a briefing on the July 4th shooting that injured two police officers on the Benjamin Franklin Parkway.

Philadelphia is in a crisis and needs a mayor who wants the job and all its responsibilities. It is beyond time for @PhillyMayor to resign for the good of the city and its residents. https://t.co/coZyOTRBQH

Along with Domb, candidates Rebecca Rhynhart and Derek Green called on the mayor to resign following his comments, which he later apologized for.

When Domb announced his resignation from City Council, he wrote in a letter to Council President Darrell Clarke that Philly is "at a crossroads," remarking that it is the poorest big city in the country and is facing the highest murder rate in its history.

Of the ten most populous cities in the United States, Philadelphia is the poorest, with nearly a quarter of its residents living below the federal poverty line. The city reached 562 homicides in 2021, the highest recorded since Philly began reporting its murder rate.

Domb pledged to support common sense and practical solutions to issues like gun violence and other public safety issues while investing in public education and supporting businesses that are suffering from a "lack of basic opportunities necessary to thrive" in the city.

While serving in City Council, Domb supported expanding the tax refund reimbursement rate for low-wage earners and lowering taxes on city wages and business income receipts. He has also worked to increase educational and employment opportunities for the incarcerated.

Domb was also one of three members of City Council who urged Kenney to declare a state of emergency in Kensington and seek emergency funding in order to clean up the neighborhood, which bears the brunt of the opioid epidemic in Philly.

"Despite the city's countless efforts and those efforts made by many amazing community-based organizations and residents, we must acknowledge that our approach isn't getting the results Kensington deserves," Domb said earlier this year. "This has become a disaster of epic proportions — a disaster that requires relief efforts that far exceed the capacity and resources of city government."

Before being elected to City Council, Domb earned a reputation as the city's "condo king," becoming a prominent broker in Center City's real estate market. Domb kept up with his real estate business while serving in city government. He purchased a 19-story office building in Center City in 2016, and critics complained his private business presented a conflict with his responsibilities as an elected official.

Domb is the fifth candidate in what could become a crowded race for mayor. Despite being the first member of City Council to resign in order to run for mayor, three other Councilmembers resigned shortly afterward and immediately announced their candidacy.

Former Councilmembers Green, Maria Quinones-Sanchez and Cherelle Parker each announced their pursuit for mayor earlier this fall. Rhynhart also resigned from her position as city controller in order to run, due to Philly's law prohibiting those actively serving in city government for running for a new position.

Jeff Brown, a grocer, is expected to announce his candidacy for mayor on Wednesday, and would be the first political outsider to enter the race so far. Councilmembers Helen Gym and David Oh, as well as state Rep. Amen Brown, are rumored to be eyeing the race, the Inquirer reported.

"I look forward to the campaign ahead, being in every neighborhood of our city, meeting with residents workers — and discussing my plans to make Philadelphia, our city, safer and stronger," Domb said.

Domb will hold a series of campaign events this week in order to rally the city in support of his candidacy. The campaign kickoff begins at noon on Tuesday at The Guild at Mural Arts, located at 915 Spring Garden St.

The candidate heads to Counter Culture in South Philly on Wednesday at 1:30 p.m., the Philadelphia Hebrew Charter School on Thursday at 8:30 a.m. and will round out the week by visiting businesses in West Philly on Friday, beginning at 52nd and Market streets at 11 a.m.