The city councilmembers announced their resignations Tuesday, a requirement to run for another municipal office

By Brian A. Saunders
PhillyVoice Staff
Politics City Council
from 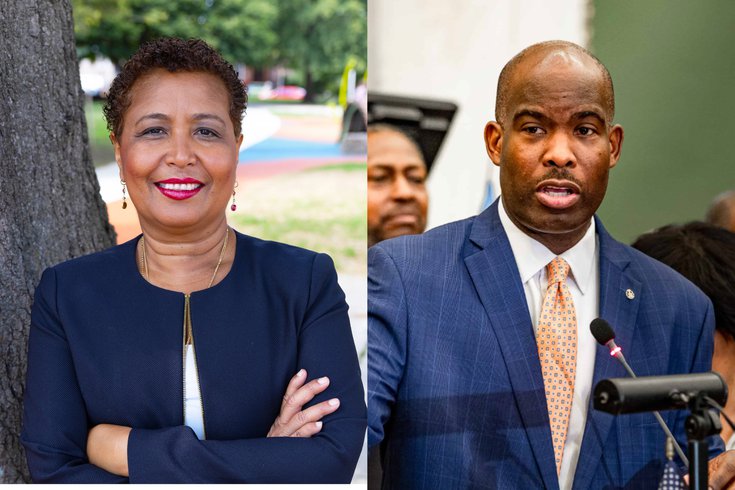 Maria Quiñones-Sanchez, left, and Derek Green, both Democrats, are resigning from Philadelphia City Council to run for mayor in 2023.

Maria Quiñones-Sanchez and Derek Green are leaving their City Council seats in hopes of serving as Philadelphia's next mayor.

Quiñones-Sanchez, the first Latina to serve on City Council, and Green, who has held an at-large position since 2016, resigned Tuesday and announced their candidacies. They are joined by presumptive candidate Allan Domb in their pursuits of succeeding Jim Kenney, whose second term expires in January 2024.

Quiñones-Sanchez, 53, said the city has made "a lot" of progress since she joined City Council in 2008, but that there is more to be done. In an interview with PhillyVoice, the Democrat said the city is at a crossroads in determining what it takes to become a prosperous city. Solving the city's violent crime problem is among her top concerns.

There have been 1,639 shooting victims this year, including 347 fatalities, as of Tuesday. Homicides have surged since the beginning of the COVID-19 pandemic. Quiñones-Sanchez said the city's leaders need to acknowledge the factors that have led to this increase, such as closing schools in underserved communities.

Important announcement: Today, I’m resigning from City Council to run for Mayor of Philadelphia. I am a child of Philadelphia public housing, a lifelong activist, and Philadelphia’s first Latina district Councilwoman. pic.twitter.com/kHe5SSsJsn

"When we fail young people in schools, and they enter our judicial system, we don't provide the kind of intervention to support them so that they don't get to a place where we see young people shooting young people," she said. "If we present the hopelessness that currently exists, there are structural problems within our system around how we provide intervention and invest in young people."

Quiñones-Sanchez, who chaired the education and appropriations committees, acknowledged that the city has invested in secondary programs designed to help the most hard-hit communities, but she said greater leadership is necessary to build sustainable infrastructure, including GED and alternative skills training programs, nonprofits and other opportunities.

During her time on City Council, Quiñones-Sanchez focused on serving underserved, low-income families and completing tax reform and housing projects. She said her experiences growing up in the city – she lived in public housing and became a longtime activist – make her a worthy candidate.

"I think our message, our life story, our lived experience, our skills, how we've dealt with things legislatively, introducing income-based payment plans for the city for water and taxes, everything I've done supporting small businesses, business tax reform," she said. "The messaging around my ability to overcome some of my own challenges, I think it's going to resonate with the majority of Philadelphians."

Green, 51, a lawyer who chaired the finance and disabilities committees, will hold a media availability Wednesday to discuss his candidacy in greater detail. In a tweet, the Democrat said city residents should "expect more and deserve better."

I sat down with @sbcmw of the @PhillyInquirer to discuss my last 6 years serving as your Councilmember At-Large. It has been an honor. Excited to tell you that I’m running for Mayor because Philadelphians should expect more and deserve better. https://t.co/24tDCJduKZ

In an interview with the Inquirer over the weekend, Green said too many people believe taxes can't be reduced while providing great city services, or that development can't be obtained while adding more affordable housing. But he said these should not be viewed as "either-or" scenarios.

He added that the next mayor of Philadelphia needs to do a better job of listening to the entire city.

"We've got a lot of issues, but when I get out around the city, I see so many community members, nonprofits and small business owners who are doing a lot and making a great impact on our city; we can be a global leader in so many things," Green said.

Quiñones-Sanchez majored in journalism at Temple University before stepping away to start a family and working for the office of Councilmember Marian Tasco. She later graduated from Lincoln University with a master's degree in Human Services. She has served as a deputy elections commissioner, worked for ASPIRA, an education agency, and helped found Eugenio Maria de Hostos, the first bilingual charter school in Philadelphia.

Green, a Philadelphia native, graduated from the University of Virginia and Temple Law School. He has served as a prosecutor for the District Attorney's Office and as a deputy solicitor under former Mayor John Street. He also worked on Tasco's staff.

Last month, Domb resigned from City Council but did not declare his intention to run for mayor. However, he pointed to Philadelphia being at a crossroads and hinted at a mayoral campaign.

The field for the 2023 race is expected to expand.