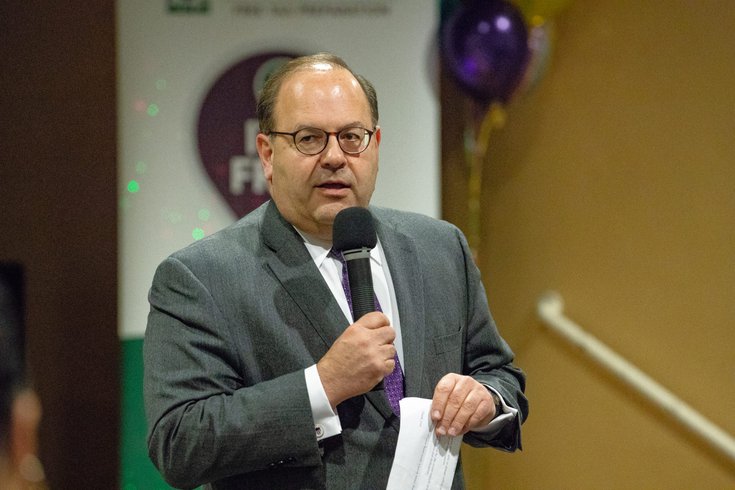 Allan Domb is expected to be part of a crowded field of candidates running for Philadelphia mayor in 2023. Domb resigned from City Council on Monday as he prepares for an expected run.

Philadelphia City Councilmember Allan Domb resigned from his elected job on Monday, setting up a likely run for mayor in 2023.

Domb, a Democrat who was known for real estate business in the city prior to being elected, was serving his second term as an at-large councilmember. His second term would have expired in 2024

The Philadelphia City Charter prohibits an elected official from campaigning for a different job while still in office.

"He announced his resignation from City Council today so that he can ethically and responsibly consider a mayoral run, which he's seriously considering," Domb spokersperson Marisa Naham said Monday afternoon. "There is no timeline right now on an official announcement. He's going to spend his time listening to Philadelphians, focusing on common sense and practical solutions to tackling the issues that Philadelphians see."

In his resignation letter Monday, Domb, 67, said Philadelphia is "at a crossroads" that requires practicality in leadership.

Philadelphia is a city of fighters and believers, and I will never stop working towards a Philadelphia that lives up to its promise for all. pic.twitter.com/2KRbBB5NIJ

"Philadelphia is the poorest big city in the country," Domb said in an emailed statement. "We are staring down the highest murder rate in our history. Too many people don't feel safe in their homes, their cars, on our transit systems and streets. Too many residents and businesses lack the basic opportunities necessary to thrive in our communities. But while the challenges we face are great, so too is the opportunity we have to be the city our people deserve."

In June, Domb had said he was "seriously exploring the option" of a mayoral run, and in July he called on Mayor Jim Kenney to resign, after Kenney said he looked forward to no longer being mayor during a briefing about the shooting that injured two police officers during the July Fourth fireworks on the parkway.

Before being elected to City Council, Domb earned the reputation as Philadelphia's "condo king," becoming a major player in Center City's real estate market. He formerly served as president of the Greater Philadelphia Association of Realtors, and as a developer, Domb has partnered with restaurateur Stephen Starr on a number of his businesses.

Since being elected in 2015, Domb has remained active in real estate as a landlord and broker. He purchased a 19-story office building in Center City in 2016, and some critics have complained his private business creates a conflict with his elected responsibilities. Domb donates his City Council salary to the School District of Philadelphia.

In office, Domb has supported expanding the tax-refund reimbursement rate for low-wage earners and shaping a budget deal to lower the city wage tax and business income receipts tax. Domb also has worked to increase educational and employment opportunities for incarcerated people, and in the realm of government real estate, he helped pass a reform that now requires independent real estate appraisals for city property sales or acquisitions.

In recent months, Domb has become more vocal about issues, such as drug addition in Kensington — calling for an emergency declaration in the area — and the state of businesses impacted by crime in Center City.

"He's proud of his record on City Council, and he also understands that Philadelphia is in crisis right now and Philadelphia needs leadership," Naham said.

Before the 2015 mayoral election in Philadelphia, Domb had considered a possible run as an independent or a Republican. He ultimately ran as a Democrat for one of the city's seven at-large council seats.

Next year's mayoral election is expected to attract a large field of Democratic candidates, including several elected officials who would need to resign before joining the race. Those anticipated candidates include City Controller Rebecca Rhynhart and city councilmembers Cherelle Parker, Helen Gym, Derek Green and María Quiñones-Sánchez.

Domb said Monday he's "immensely grateful" for his time on City Council and looks forward to building on his political experience.

"Ours is a city of fighters and believers and I will never stop working to create a Philadelphia that lives up to its promise for all," Domb said.