Eric Ruch received 11 1/2 to 23 months in prison for the 2017 killing of Dennis Plowden, an unarmed Black man 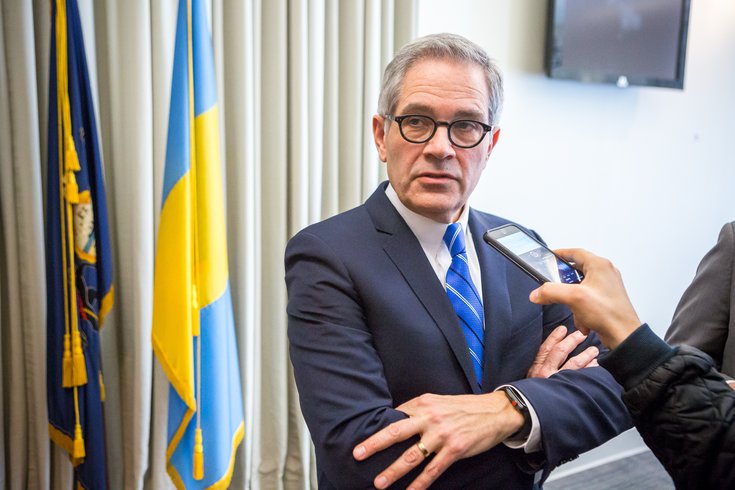 Ruch stood trial in September for the fatal shooting of Dennis Plowden Jr., a 25-year-old unarmed Black man whom Ruch pursued by car on Dec. 27, 2017. After Plowden crashed his vehicle, Ruch shot him in less than six seconds, prosecutors said, even as Plowden sat on the sidewalk, raising his left hand in surrender.

Krasner believes Ruch's current sentence is "unreasonable," according to a motion dated Monday, Nov. 28 and filed in Philadelphia Common Pleas Court. The district attorney's office argues that the sentence is "a gross downward departure" from standard recommendations, which are 4 1/2 to 6 years for a voluntary manslaughter when a deadly weapon is used and the defendant has no prior convictions. Krasner has asked the court to issue a new sentence within the state guidelines.

"The record does not support this departure, such a departure severely lessens the gravity of the offense for which the defendant was convicted — intentionally taking the life of another human being, and suggests that a different standard applies to this defendant than other defendants," Krasner's motion reads.

Krasner announced his intention to appeal the decision the day Ruch's sentencing was announced. Criminal justice advocates and members of Plowden's family were outraged by Common Pleas Judge Barbara McDermott's sentence, believing the court was too lenient on Ruch.

"I wasn't surprised, but I was disappointed," Plowden's widow, Tania Bond, told reporters. "Who wastes five years to come to court to hear 11 to 23 months? Did we value Dennis' life or did we just throw something out there to feel like we shut the family up and we satisfied?"

McDermott claimed Ruch had demonstrated good behavior since being charged, and that "nothing he is going to do in prison is going to make him a better person." Further rehabilitation through prison time, she argued, was pointless.

Commonwealth of Pennsylvania v. Eric Ruch was the first murder trial against a PPD officer in almost 40 years. Ruch's conviction for the death of a civilian was also the first for an on-duty police officer in Philadelphia history. Following an internal affairs investigation, Ruch was fired from the Philadelphia Police Department in 2018. He was not charged until 2020, however, when he turned himself in.

Philly police had initially pursued Plowden on Dec. 27, 2017 based on the belief that his car was connected to a recent homicide. Plowden, it was later discovered, had only borrowed the car and was not linked to that investigation.

A two-minute chase ensued that ended with Plowden crashing his vehicle. He emerged the wreck dazed, witnesses said, and raising his left hand. His right hand was hidden from view. Ruch fired a single shot at Plowden's head, believing he was concealing a weapon in his right hand, but he was unarmed.

Plowden died of his wounds the next day. He is survived by Bond, his two children, three stepchildren, his sister Diamond Plowden and mother Shanita McCoy, who made a fiery statement at the sentencing.

"Eric Ruch still gets to see his wife in prison," she said, turning to the sentenced ex-officer. "I hope my son's death haunts you every day."