Born and raised in Philly, she's on a mission to publicly shame the show's 'leggings' panel 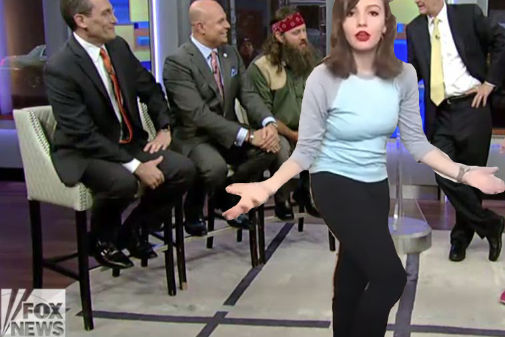 Masterman School graduate Addie Weyrich has launched a series of YouTube videos inspired by a panel about "leggings" on the TV show "Fox & Friends."

It all started two weeks ago when Addie Weyrich got distracted while trying to finish up some homework in her New York City apartment.

Her attention turned to a friend's Facebook post involving a segment on "Fox & Friends" regarding the morality of wearing leggings, a discussion led by a panel of old white dudes Weyrich said were "just trying to hide their boners" when a trio of women were marched before them for judgment.

"I try not to let things like that make me mad, but I went to class pissed off that they think they can tell me what to do with my own body. I got so, so mad.

"This panel was talking about what they'd let their daughters wear? And, why is the guy from 'Duck Dynasty' there?" she continued. "Why is this a thing? Why are they doing this? Are they seriously taking time on air to talk about what women should wear in public, in the most horrific way possible?"

It was then that "ranting in class" blossomed into a sarcasm-steeped mission to publicly shame the show into seeing the error of its ways.

In each of the past 15 days, Weyrich, 19, has posted a short video on YouTube where she gets into naive young-lady character and seeks fashion advice from "Fox & Friends."

Specifically, she stands before her iPhone, talks about what she's wearing and requests feedback from the show, which she tags on each Facebook video in the hopes that even just one of the heartfelt pleas will catch someone's eye and elicit a review of said attire.

The ultimate aim is to land an appearance on the morning gabfest to talk leggings (and more, including the persistent theme in early videos of proper tips about when to wear or not wear a bra).

If you get the sense Weyrich has good stage presence, it's for good reason.

A student at NYU's Gallatin School of Individualized Study, she's learned improvisational theater and sketch comedy with The Second City troupe in Chicago (for a couple weeks). She'd leave high school early and take the Bolt Bus to New York City with her dad to work with the Upright Citizens Brigade, returning home in the wee hours to start all over again, and the Philly Improv Theater.

Suffice it to say, her parents are entertained.

"I kind of want Fox News to feel stupid for doing this, to see how silly these videos are, and, yeah, it is just as silly as Fox News thinking they have control and authority to decide what I can and can't wear." – Addie Weyrich

"She's a really outspoken kid and has always had a sense of speaking up on matters of injustice, anything with a hint of misogyny. And, she's really funny!" said Polaneczky, a proud mother and longtime columnist at the Philadelphia Daily News. "She's always been a performer, a natural kind of performer with an acting gene. She just took to it when she was involved in a teen improv troupe. It's kind of extraordinary for a kid to come up with the stuff she was coming up with. That was really amazing."

That background provided a good mechanism to harness the leggings rage. Namely, the "if this is true, what else is true?" dynamic that serves as an improv jump-off point.

"If 'Fox & Friends' thinks it has the credentials and authority to think it can tell people when it's OK to wear leggings, they probably think they can tell me more about how to live my life in general," she said, before slipping into character. "Obviously, I don't know. I'm a young woman in New York City, away from any strong male influences to tell me what to do with myself."

Philosophically and academically speaking, Weyrich said that Saturday Night Live, Amy Schumer and Key and Peele emulate a "comedy is a tool to promote well-being and societal change" ethos, which allowed her to "take boiling anger about the video and turn it into something people can laugh at.

"Each video is not very special on their own. But [what makes it special is] the persistence of it, the 'Addie, what are you doing?' I'm not going to stop until I get a response," she said. "If I just stood outside Fox News and ranted about leggings, no one would give a s---, but using social media makes it much more threatening.

"I kind of want Fox News to feel stupid for doing this, to see how silly these videos are, and, yeah, it is just as silly as Fox News thinking they have control and authority to decide what I can and can't wear."

Weyrich said she's uncomfortable with the original viral video that led to the panel in the first place, too.

"I haven't been able to watch the whole thing," she admitted. "What I think is most interesting is that with so many topics to talk about, they decided to look at her video and validated what a crazy woman in Tennessee had to say.

"It's frustrating and irritating to watch it. Kids are always rebelling; everything changes whether you want to change with it or not."

For now, she'll keep making the daily videos. Persistence is key, as is the hope that someone with guest-booking capabilities will ask her to join the "Fox & Friends" crew one morning. And what will she do if that happens?

"If they invited me, I would go on the show, for sure, though I have to think about whether I'd keep it in 'character,'" she said.

One last important question: Would Addie Weyrich vouch for leggings as being pants for a national audience?