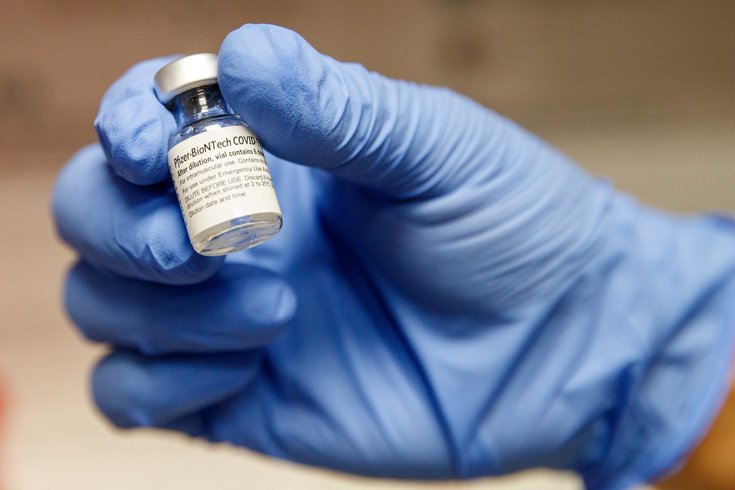 Above, Pfizer's COVID-19 vaccine is one of three that is currently available in the U.S.

Philadelphia is turning its attention to another battle at the forefront of the COVID-19 pandemic: vaccine apprehension.

The city is rolling out "Let's Vax Up, Philly!," a public campaign aimed at addressing hesitancy among city residents about receiving a COVID-19 vaccine when they are deemed eligible.

Totaling $1.5 million, the initiative will utilize multiple media platforms over the next six months to educate Philadelphians about the three available COVID-19 vaccines and encourage them to get inoculated when it is their turn.

"Let's Vax Up, Philly!" will initially start small in local communities, but will eventually expand out across the entire city, according to KYW.

“[The campaign] emphasizes how vaccination will help us get our lives back to normal,” Health Commissioner Dr. Thomas Farley said. “[The campaign] shows people in Philadelphia doing what they love to do and have not been able to do for so long, like having a meal with friends or hugging their grandmother or going to church.”

The rollout of "Let's Vax Up, Philly!" comes as hesitancy among Black Americans to get vaccinated appears to have waned over the last several months to the point that they are less hesitant than white people.

A national poll conducted in December by the Kaiser Family Foundation found that Black respondents were less likely than white respondents to get a COVID-19 vaccine. Roughly 35% of Black respondents said they probably or definitely would not get vaccinated.

But in a national survey conducted earlier this month by NPR, the PBS NewsHour and Marist University, only 25% of Black respondents said they did not plan on getting vaccinated. That figure was lower than the 28% of white respondents who expressed vaccine hesitancy — and it was far lower than the 49% of Republican men who said they would not get vaccinated.

Vaccine hesitancy has remained a bit higher among Latinos, with 37% of respondents saying that they probably would not get vaccinated. That's partly because they tend to be younger, and younger people have been less interested in being vaccinated, according to NPR.

Concerns over side effects and how quickly the vaccines were developed, as well as a desire to learn more about how well the vaccines work, were among the chief reasons survey respondents cited for their apprehension.

Over 490,000 Philly residents are either partially or fully vaccinated against COVID-19, according to the city.

The city is in Phase 1B of its vaccine distribution plan. Among the eligible groups: Seniors ages 65 and older, people with high-risk medical conditions, first responders, transit workers, teachers and food service providers.