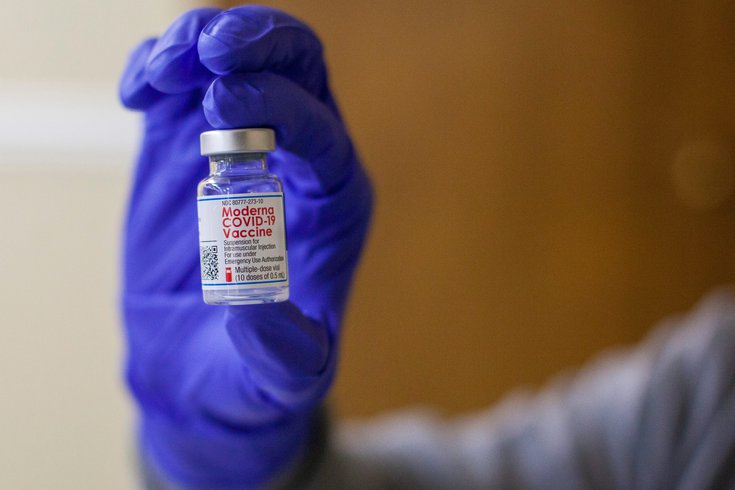 A Stockton University poll shows New Jersey's racial minorities are not receiving COVID-19 vaccines at the same rate as white people. Above, Diella Thomas-Sapp shows the adhesive bandage covering the spot where she received a COVID-19 shot at Praise Ministries Church in Monmouth County.

The majority of New Jersey's racial and ethnic minorities want to be vaccinated against the coronavirus, but their willingness to be inoculated isn't leading to more doses going into arms. And the same is true of the state's lower-income residents.

COVID-19 vaccination rates among white and more affluent New Jersey residents are outpacing those of minority and lower-income residents by roughly two-fold, according to a poll published Tuesday by Stockton University.

Yet, a majority of every demographic surveyed expressed both a desire to receive a COVID-19 vaccine and concern about contracting the coronavirus, the poll found.

Two-thirds of all respondents said they would definitely or probably get vaccinated, with Asian respondents being the most likely, at 93%. Black respondents were slightly more willing than white respondents, with their respective rates at 68% and 64%.

About 75% of Hispanic respondents said they would get inoculated compared to 64% of non-Hispanics.

There was not much variance among income groups.

"These findings reflect inequity in how the virus and the vaccination process are affecting people of color and lower-income populations in New Jersey," said John Froonjian, director of Stockton University's Center for Public Policy.

"Black, Hispanic and lower-income residents are just as worried about COVID and are as eager to be vaccinated as the rest of the population," Froonjian said. "But they are waiting longer to get access to the vaccine, and more of them are getting sick."

Much has been written about the hesitations of Black Americans to get vaccinated, with many news articles pointing to the infamous Tuskegee Syphilis Study and other prior injustices. But many Black people say their hesitations stem from contemporary health inequities, including limited access, and safety concerns.

And their collective hesitancy appears to have waned over the last several months to the point that they are less hesitant than white people.

A national poll conducted in December by the Kaiser Family Foundation found that Black respondents were less likely than white respondents to get a COVID-19 vaccine. Roughly 35% of Black respondents said they probably or definitely would not get vaccinated.

But in a national survey conducted earlier this month by NPR, the PBS NewsHour and Marist University, only 25% of Black respondents said they did not plan on getting vaccinated. That figure was the lower than the 28% of white respondents who expressed vaccine hesitancy — and it was far lower than the 49% of Republican men who said they would not get vaccinated.

Vaccine hesitancy has remained a bit higher among Latinos, with 37% of respondents saying that they probably would not get vaccinated. That's partly because they tend to be younger, and younger people have been less interested in being vaccinated, according to NPR.

New Jersey officials have pledged a fair distribution of COVID-19 vaccines since the rollout began in December.

"As we continue our vaccination efforts across the state, ensuring equitable access to appointments and vaccinations remains our highest priority," Gov. Phil Murphy said last month.

But through four-plus months of COVID-19 vaccinate distribution in New Jersey, white residents make up the overwhelming majority of recipients so far.

Roughly 59% of the 3.6 million vaccine doses administered in New Jersey have been given to white people, according to the state's COVID-19 dashboard. Asian and Hispanic people have each received 7% while Black people have received 5%. Another 22% have gone to people who did not list report their racial identity or listed it as other.

In an effort to make vaccine distribution more equitable in New Jersey, the state has established a COVID-19 vaccination program specifically for underserved communities. These areas have been identified as socioeconomically-challenged communities that have been disproportionately impacted by the public health crisis.

Camden, Vineland and Pleasantville make up three of the program's 10 locations. The program has administered about 30,000 doses within those communities, state officials said Monday.