Letting them off the hook: Player grades and analysis for Union 2, Toronto 2 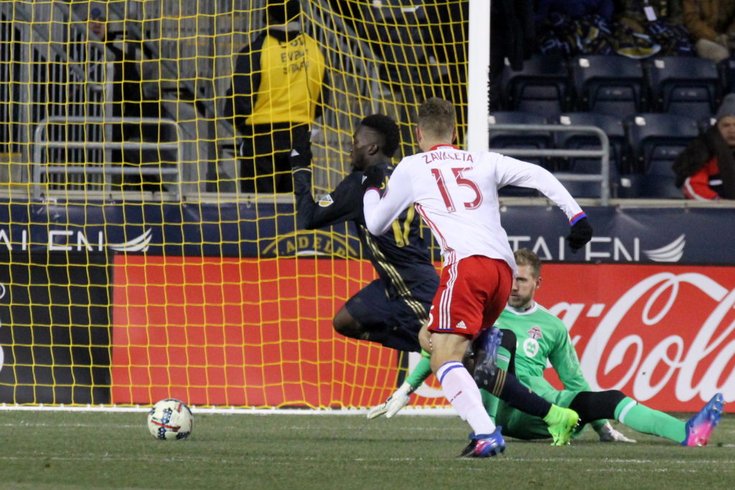 C.J. Sapong scored his first goal in six months to hand the Union a 2-2 draw against Toronto FC on Saturday.

Did the Philadelphia Union go toe-to-toe with the defending Eastern Conference champions?

Or did they drop two points at home?

I'm leaning towards the latter because of the missed penalty at the end of the first half. Instead of going into the break with a two-goal lead, the Union were burned by a soft call on the other end and had to settle for a halftime stalemate. After falling asleep on a restart goal, Jim Curtin's team then fought back with a late equalizer to settle for a point at home.

The opportunity was there to step on Toronto's throat and put the game away.

There are still a lot of positives to take from this one. For the first time in a year, Union strikers scored multiple goals in a game. Jay Simpson bagged his first MLS goal. Chris Pontius and Fabian Herbers contributed quality assists and the team responded well after going down 2 to 1.

My post-game thoughts are summed up by the late Dennis Green.

Chris Pontius as a 'target winger'

The Union opener is not going to win "goal of the week," but it was a thing of beauty in many ways.

It starts with Haris Medunjanin playing a long diagonal towards 6'0" Chris Pontius, who is inside the box and marked by the 5'7" Tsubasa Endoh, an attacker playing out of position as a makeshift wingback. Pontius wins the aerial battle and heads the ball down for Simpson, who stoops low to cushion his header past Clint Irwin.

First of all, it's smart of Medunjanin to realize that you've got a 3v3 inside of the box. Why not put the ball in there and see what happens? Pontius is in a good pinch position and he's on the winning end of a height mismatch.

Second, we saw Pontius win this type of ball consistently in 2016. He's sneakily underrated in the air and wins a large percentage of aerial duels.

According to Whoscored.com, Pontius finished top ten in MLS last season with three aerial duels won per game. Six of those top ten players were center halves, while the other three were primarily used as center forwards. You could put an asterisk next to Kevin Doyle, who played a bit as a second striker last season, but Pontius is the only wide player on the list. 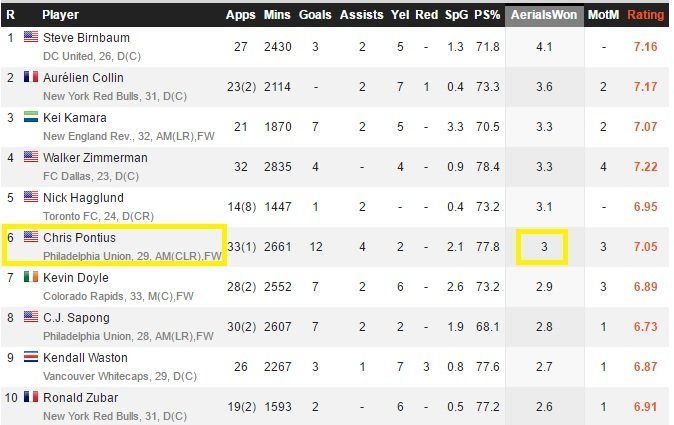 This season, you've only got a sample size of two games, which really makes looking at the "aerials" category somewhat useless.

But let's check it out anyway.

After a whopping 180 minutes of play, Pontius leads the league in average aerials won.

A lot of times we think about wingers being smaller and shiftier. You have guys like Alberth Elis and Romell Quioto in Houston who are wreaking havoc with their ability to run at defenders and get into dangerous areas. Other wingers might be able to cut inside, play a final ball, or hit a cross into the box. Think about the threat presented by a Nacho Piatti, a Mike Grella, or a Joao Plata.

Pontius is different. He does successfully cut inside on his right foot, but he isn't going to beat you for pace or dribble three players towards the endline. He's a strong, two-way winger who will protect the left fullback while also getting into preferable mismatches against smaller defenders.

If you have a guy like Medunjanin who can consistently hit that cross-field diagonal, then Pontius should pinch at every opportunity. His ability to create chances from simple long balls is something that the Union can really take advantage of.

Here's a prototypical example of a target winger goal, with Kei Kamara, deployed on the right, sinking inside to create a height advantage against a smaller fullback.

The difference between a target forward and a target winger is that the latter is probably receiving a long ball at a wider angle with a shorter defender marking him.

He took his goal well, showing patience to crouch down and nod the ball home. Some strikers would have rushed that attempt and hooked the shot high or wide with a goalkeeper charging them down.

It's a shame he had to come off injured a short time later because you want to see what he can do after getting off the mark.

I talked about his assist above.

Beyond that, he only had 30 passing attempts and lost the ball three times to go along with three conceded fouls.

It's always the same thing with Pontius, who provides a shield for Fabinho on the left, drifts in and out of the game, then pops up with a critical goal or assist.

The missed penalty really came back to hurt. If you're the team captain and highest paid player, you're expected to bury those, especially if you didn't earn the PK in the first place.

I thought Bedoya came out strong in this game. His work rate was excellent and he moved around the field, springing Pontius down the left then picking him out with a right-sided cross.

That slowed down a bit as the game progressed, and he came back to do more defensive work in the second half, finishing with nine recoveries, a clearance, and an interception. He won a few fouls in the Union half, and had three offside calls going forward. That tells me that he made more of an effort to push up and be that second guy coming into the box.

He earned the penalty, which I thought may have actually occurred outside of the box. Either way, credit to Fabian for making that heads-up run on the quickly-taken restart.

Herbers quietly had a very good game. The assist on Sapong's goal was brilliantly timed and weighted, with a little lateral move to freeze the defense and allow the striker to sneak free on the back shoulder.

Herbers also put in a dangerous ninth-minute cross for Pontius, who almost got on the end of it. He had another key pass into the box in the 62nd minute.

Another calm and collected game from Jones, who again kept things simple in the center of the park.

Even though the penalty call was poor, he has to know that referees are looking for clutching and grabbing inside the box, and Jones did have his arms in a compromising position around Altidore. I'm not sure why he was marking Jozy in the first place. I know Jones is tall and strong, but I'd rather have Onyewu or Marquez marking a veteran center forward.

Penalty to Toronto. Hard to see from this view but it's the best we got. #PHIvTOR pic.twitter.com/hN0iZI077K

It may not have been apparent during the game, but Jones quietly racked up a ton of activities. He finished with 11 recoveries, one block, one interception, and six clearances inside of his own penalty area. His tackle and dribble rate was around 50% and he actually lead the team with three shot attempts, though two were blocked.

The interesting thing to me was that Jones finished with zero pass attempts in the final third. There were a couple of times he stopped just at the edge of the area and moved the ball horizontally, but he rarely made that push into the opposing third. We'll see if he becomes more adventurous as the season progresses.

He picked up a secondary assist on the opening goal. I don't know if I'm handing out an assist for that pass, but it was smart of him to recognize the mismatch.

Most of his contributions on Saturday were similarly shrewd. On the Herbers penalty call, it was Medunjanin who quickly settled the ball and played the pass into the box after referee Mark Geiger blew the play dead. Later, there was a sequence when he quickly took a throw-in to spring Bedoya down the left flank for a cross into the box and a half-chance.

His game recognition is definitely there, and his work rate and defensive frailty does not seem to be as much of an issue as I thought it would be.

He's also the only player on the team who would even try this pass:

Credit to Rosenberry for taking the blame on the second Toronto goal. The right back switched off briefly, which allowed Justin Morrow to get behind him and settle for a close-range finish.

He played a good game otherwise. I only recall one instance where Morrow was able to get behind him during the run of play, and that was cleaned up by Onyewu.

Outside of two clumsy fouls on the edge of the box, he shut down pretty much everything that came his way.

I only saw one play that he didn't completely snuff out and that was a low cross into the box that he got a boot on, but couldn't steer away from the danger area.

Otherwise, did you even hear his name called?

Solid defensively with a nice body of work down the left side. He did show some impatience in the passing game with a few balls lumped forward to no one in particular.

Blake finished with one save, three punches, and three crosses caught. I thought he played his typically sound game and showed assertiveness attacking the ball in the air.

It was nice to see C.J. Score his first goal since August of last year.

It wasn't his typical goal, either. He's not the type of striker to sit on the back shoulder and peel off like that. The finish was smooth and the run was even better.

He's a really nice change of pace off the bench. They tried to spring him a couple of times but he just couldn't break free.

I just don't think that bringing him in with seven minutes left really gives him time to do anything. I wouldn't mind seeing Bedoya move over to the right to give Alberg 15 to 20 minutes in the middle of the park towards the end of the game.

Yeah, the Altidore penalty was soft, but that's a new point of emphasis this season.

He also awarded the Union a questionable PK and called a smart advantage just before the free kick leading to the foul.

Geiger does have the capacity to ruin a game, but let's not allow the officiating to take away from the bigger issues, which were the missed penalty and the defensive breakdown on the second Toronto goal.

This was the coldest Union game on record. I thought more people would stay home, but the atmosphere was great.