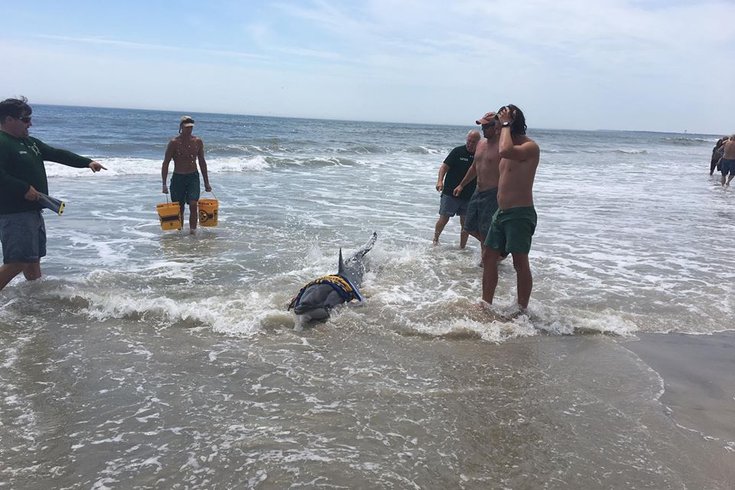 Sea Isle City lifeguards are seen here helping an injured dolphin off the beach on Wednesday.

A dolphin that washed ashore in Sea Isle City on Wednesday was saved by the lifeguards on duty.

The Sea Isle City Beach Patrol posted photos of the incident to Facebook, showing the dolphin being taken off the sand and then transferred to a Marine Mammal Stranding Center truck.

The post read: "Never a dull day on the beach! We don't just help people but animals too!"

Sea Isle City beach captain Renny Steele said the dolphin was spotted in the surf around 11:22 a.m. at the 49th Street Beach. It was a spotted dolphin, which are usually seen much further off shore.

Steele said the dolphin was sick and trying to beach itself. It also was bleeding a little, possibly from being struck by a passing boat or from flapping around on the sand.

Inquirer reporter Amy Rosenberg was on the scene and posted several videos of the rescue to Twitter.

Its tail is slapping on the sand, and the dolphin is definitely bleeding a little, maybe from a boat, says SIC BP Capt. Renny Steele. pic.twitter.com/MQ1kfOkqTw

Sea Isle City beach patrol tending to an injured dolphin who is bleeding - they're waiting for Marine Mammal Stranding. pic.twitter.com/F1Hb9jQnJI