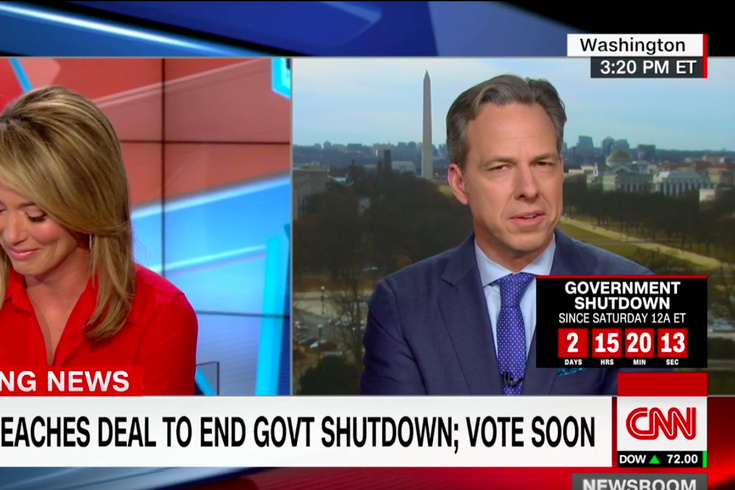 On Feb. 4 in Minneapolis, the Philadelphia Eagles will look to avenge their heartbreaking 24-21 loss to the New England Patriots in Super Bowl XXXIX, a hard-fought game whose outcome was eventually called into question when details of the Patriots' Spygate scandal became public knowledge.

There tends to be an unshakeable double-think about New England's dynastic run under Bill Belichick and Tom Brady. While their greatness is undisputed, the team's documented history of conniving to get an advantage is simply impossible to ignore unless you root for the team or place winning at all costs above the integrity of the game.

For CNN anchor Jake Tapper, a lifelong Eagles fan who spent his childhood in Philadelphia, attending Sunday night's 38-7 victory over the Vikings was a dream come true. Tapper went to the game with his father, a former pediatrician who lived just a few miles from the Sports Complex in South Philadelphia.

I want to thank the @Eagles for inviting me and my pop, who turns 78 this year, to that AMAZING game last night. (Some Queen Village/South Philly parents out there know him as Dr. Tapper, their kids’ pediatrician.) A wonderful father-son experience/memory. #FlyEaglesFly pic.twitter.com/fm813Gfprd

On Monday, Tapper was asked about the game by colleague Brooke Baldwin, an Atlanta Falcons fan who watched helplessly as the Patriots mounted last year's improbable comeback to win their fifth Lombardi Trophy.

Tapper, operating just as he does when discussing politics, didn't mince words at all.

“The Patriots are cheaters, Brooke. The Patriots cheat," Tapper said. "This is just a fact as established by investigations. They’re a cheating team"

Forget about TRUMP, @JakeTapper is FINALLY speaking truth to power on THE most important issue of the day: "The @Patriots are cheaters, @BrookebCNN. The Patriots cheat. This is just a fact as established by investigations. They're a cheating team” 🦅 https://t.co/nGVqxfJZUv

Tapper isn't sure if he'll make the trek to Minneapolis for the Super Bowl, in part because he sees himself as a bad luck charm for the teams he supports. Sunday night's outcome seems to prove otherwise.