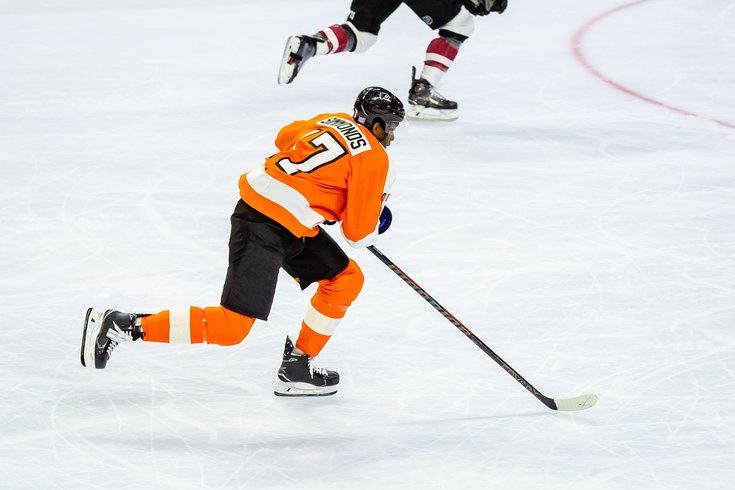 Wayne Simmonds of the Philadelphia Flyers during a game against the Arizona Coyotes at the Wells Fargo Center in South Philadelphia.

The Flyers' 5-1 loss to the Canadiens on Thursday night is just the latest indication that Chuck Fletcher's teams should be sellers ahead of Monday's NHL Trade Deadline — they actually have a better shot at winning the draft lottery than making the playoffs. And when it comes to the Orange and Black, one name keeps coming up over and over again: Wayne Simmonds.

The veteran forward, who is in a contract year, has been rumored to be on the trade block for quite some time now, but according to multiple reports, the rest of the league is waiting for the Ottawa Senators to deal their big-name players before shifting their attention to Simmonds.

According to league sources, the majority of buyers looking for that blockbuster deal to boost their roster are all waiting for the Ottawa Senators to make the first move. The Sens have the two most highly coveted players in forwards Mark Stone and Matt Duchene, both of whom didn’t play Thursday night as a precautionary move.

Once those wheels are set into motion and both players are traded as anticipated, it’s expected the teams will start moving quickly toward their secondary plans and that’s where Fletcher, the Flyers and Wayne Simmonds all come into play.

The Athletic’s Pierre LeBrun believes the Bruins and Lightning have been the two front-runners for Simmonds, but over the course of the past few weeks, scouts apparently have been less than impressed with what they’ve seen out of the Flyers' power forward.  [nbcsports.com]

UPDATE [12:10 p.m.] — It appears the first of the Ottawa dominos has fallen, with Matt Duchene going to Columbus.

Confirming Matt Duchene has been traded to Columbus. Details to come.

Then, of course, came Thursday night's loss in Montreal.

On this week's 31 Thoughts: The Podcast, the Elliotte Friedman' shared some thoughts on the Flyers forward with co-host Jeff Marek.

“The thing about Simmonds is I think his market has come to a halt,” said Friedman. “Every time I check in on the Simmonds market, I keep hearing, ‘Wait until the Ottawa guys, wait until Panarin, wait until all of that stuff.’

“I guarantee to you that there’s some GM out there, or two, saying, ‘I’m going to steal Wayne Simmonds.’”  [nicholsonhockey.com]

One of those GMs could be Winnipeg's Kevin Cheveldayoff, as the Jets have reportedly checked in on Simmonds, according to TSN's Darren Dreger.

There’s no question about that he’s staying in touch with the New York Rangers as well. There are lots of teams with interest in Kevin Hayes and Mats Zuccarello and interestingly enough, those guys are in the lineup for the New York Rangers – they’re playing in Thursday’s game.

He’s also checking in with the Philadelphia Flyers on Wayne Simmonds, so he’s pretty keen on trying to add a significant piece as we know, but he’s getting a significant piece regardless of trade because Nikolaj Ehlers is very close to coming in off injury.  [tsn.ca]