What it's like to survive a flesh-eating bacterial infection

Three stories of people combatting and living through necrotizing fasciitis 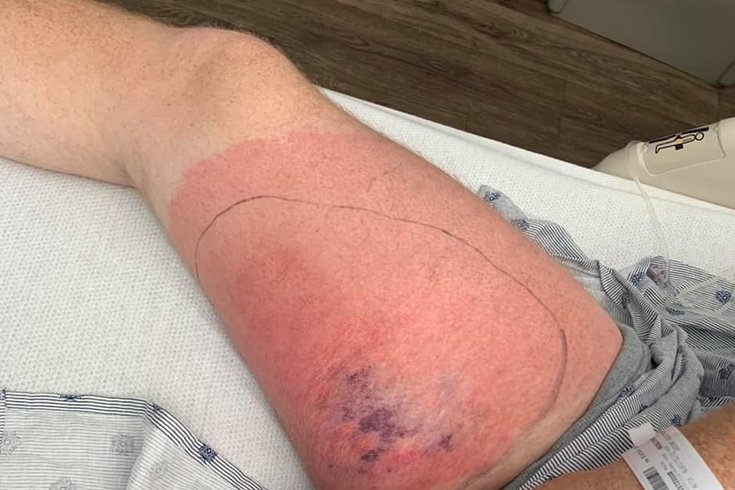 Pictured is the infected leg of Ricky Rutherford, an Alabama man who contracted necrotizing fasciititis during a weekend kayaking trip in his home state. His wife told their story on Facebook.

Unless you’ve been hiding under a rock, you’re likely aware of the flesh-eating bacteria, necrotizing fasciitis, that has impacted or taken the lives of a number of people who have visited warm-water beaches, mostly in Florida.

As a reminder, the infection is quite rare, but does spread quickly and broadly in the body when then infection is picked up — often through an open wound.

But what’s often missed in the scary reporting of necrotizing fasciitis is what it’s actually like to live through the experience.

RELATED READ: Necrotizing fasciitis: Is it a threat this summer at the Jersey Shore?

One survivor recounted her infection in January 2009 to The Cut. Kate, 28, recalled bumping her shin while getting up on stage at a club in Canada and not thinking much of it. After a week of the “gnarly” cut, Kate woke up one morning to extreme swelling on the leg of her cut. Kate told the website:

“Later that day, I was starting to be in unbearable pain, and I was getting feverish. My skin around the cut was also getting so, so tight, and there was so much pressure; it felt like all the blood in my body was rushing to this one part. It felt like it was going to explode.”

At this point, it was clear that she needed to go to the hospital. After a while doctors finally realized the intensity of the infection and discussed amputation of Kate’s leg. Fortunately, that didn’t happen and Kate slowly healed, but she reportedly still experiences “ghost pains” from the infection, The Cut reported.

The New York Post reported on a Florida woman’s recollection of her flesh-eating infection in 2015. Patty Born was coming home from a day at the beach when she started feeling, well, off.

“As we headed home my leg started getting real hot and it just felt weird,” Born said, per the Post. “I couldn’t stop it, then I started feeling nauseated and hot.”

Born tells the Post that it looked like her leg was “rotting off” and that she was not expected to live through the infection.

The wife of an Alabama man who is currently flighting for his life against necrotizing fasciitis is telling their story on Facebook, according to the New York Post. Cassie and Ricky Rutherford reportedly went on a weekend-long kayaking trip and two days later, he came home with a very high fever, leg cramps and a swollen leg.

Ricky was taken to the hospital and doctors cleaned out a “5-by-6-inch chunk of his leg,” the Post reports.

According to Cassie, her husband had no open cuts, scratches or wounds.

"But the doctors told us it could be a microscopic hole that it could come into and still spread like that. It’s hard to believe that there was a group of us and my husband, being the healthiest immune system there, got this. He’s never sick. He doesn’t even have a doctor. To know that he got that when the rest of us didn’t is insane,” Cassie tells the Post.