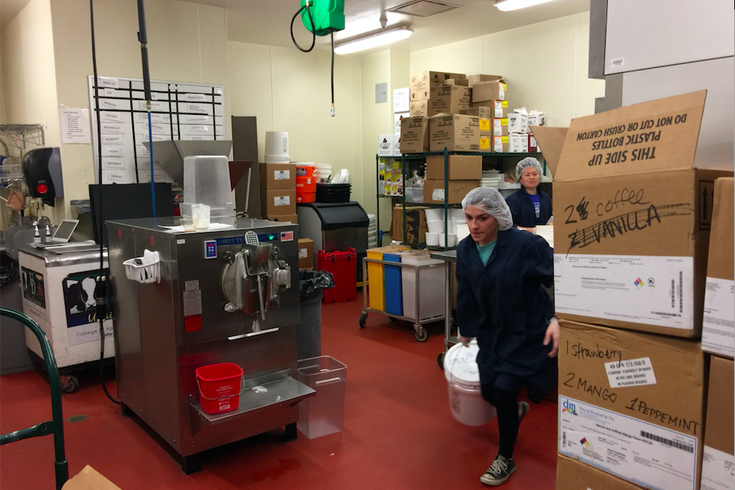 The University of Delaware's UDairy Creamery has teamed up with Iron Hill Brewery to create ice cream flavors including beer and bourbon.

More than two decades ago, Iron Hill Brewery & Restaurant opened its first location smack dab in the heart of the University of Delaware’s campus in Newark, Del.

Having grown into an operation with a dozen locations throughout the tri-state region – with plans to open one in Center City next spring – Iron Hill has now teamed up with the school to create an ice cream flavor inspired by its award-winning Russian Imperial Stout.

“Inspired by” might not be the best description, actually. The beer itself is actually in the recipe and mix, as is Maker’s Mark in the Malted Bourbon Pecan variety.

To further simplify: the business and the school have teamed up to make beer and booze ice cream.

“I guess over time you could (get drunk), but that’s a lot of ice cream to ingest.” --Melinda Shaw

With ties to the University’s College of Agriculture and Natural Resources, the UDairy Creamery has already supplied Iron Hill’s 12 locations with some 3,800 gallons of ice cream – those two flavors along with vanilla and chocolate chip cookie dough – this winter.

While this partnership represents a unique first at the school, ice-cream making isn’t exactly a new endeavor for the university’s college of agriculture.

Starting back in 2008, milk from dairy cows there was shipped to Kilby Cream and made into ice cream. The next winter, they teamed up with a local dairy company owned by an alumnus which currently ships milk from the UD farm to be made into an ice-cream base at Cumberland Farms in New Jersey.

In April of 2011, the school opened its quaint UDairy Creamery storefront on campus near the university’s football stadium off South College Drive. Today, that ice-cream base is shipped to that storefront, which also houses a production room.

There, the ice cream is painstakingly made as they await expanded facilities a couple hundred feet away.

On Monday, two undergraduate students were hard at work in the non-profit creamery’s production room that revolves around a “batch freezer” machine with a cylinder capable of making roughly 10 gallons every 20 minutes.

Since the operation’s a non-profit, proceeds go toward expanding these operations. This is particularly important when you want your supply to match the demand.

“We’re not in business to sell ice cream, but when a company wants to offer [an arrangement to team up and help educate students], we wanted to make it happen,” said Melinda Christine Shaw, who initially developed, opened and now oversees the ice-cream processing plant and parlor.

“We are trying to build things, not getting bonuses,” she continued, noting that sales also help sustain funding for dairy-farm research efforts.

Shaw said when Iron Hill asked if the Creamery was interested in making their first ice cream, it felt like a natural fit.

After a few months of research and experimentation, the team settled on an ideal recipe.

“We do actually put beer in [with the ice-cream mix of cream, milk and sugar] for flavoring, along with spices and cocoa powder,” said Shaw, noting that about two quarts of imperial stout end up in a mix that creates nine or gallons of ice cream.

What makes the process trickier is the fact that “alcohol doesn’t want to freeze” so creamery workers have to make the batches colder than they would otherwise.

"We wanted to have it taste like the product, but not like a beer. It's a big, strong stout – heavy coffee and dark-chocolate flavor that makes it great for dessert." -- Mark Edeslon, Iron Hill co-founder and co-owner

Mark Edelson is the co-founder, co-owner and head of brewery operations at Iron Hill. He said Kevin Davies, a co-founder who serves as Iron Hill's head of culinary, took up the charge to find an ice-cream provider.

Edelson said the trend of creamery popularity on college campuses, like that at Penn State, made Delaware a logical, local partner, particularly since they'd already worked with the school's hospitality program before.

"Anybody who goes to Penn State says 'go to the creamery.' There's huge lines. So, we started to explore for a local partner. Ice cream: everybody loves it," he said, noting that they'd used a local creamery in the early days, but as their business grew, the need for more emerged.

Since he's in charge with brewery operations, Edelson was closely involved with the tasting process before settling on the mix that would soon find its way to customers' tables.

"They came out with a number of different types and bases, put the beer in it, and we found one that had the best balance to it," he said.

"We wanted to have it taste like the product, but not like a beer. It's a big, strong stout – heavy coffee and dark-chocolate flavor that makes it great for dessert."

The university’s College of Business and Economics also teamed up with Iron Hill, which will offer “an internship opportunity in brewing to a qualified undergraduate student” this spring.

Shaw said about 15 applications arrived within three days of the internship being announced; Edelson said the selection process will start soon.

The new program expands Iron Hill’s internship opportunities to undergrads, with hospitality, food science and students who want to turn homebrewing into a profession among those interested.

Before I left, I had to ask one very important question for Shaw: Can you actually get drunk from eating the beer or bourbon ice cream?

“I think you might puke from all the ice cream you’d have to eat. It’s 14 percent butterfat,” Shaw said.

“I guess over time you could, but that’s a lot of ice cream to ingest.”