Champagne-heavy bar with a view coming by end of April 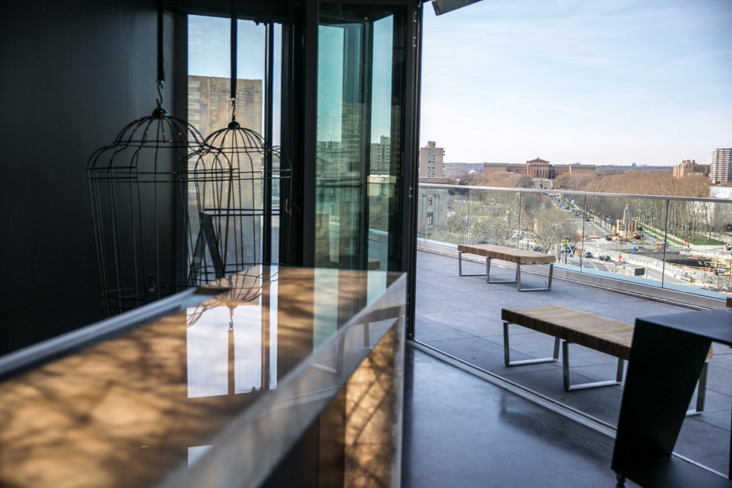 A peek at the view from atop Assembly Rooftop Lounge, which rests nine stories above the Benjamin Franklin Parkway.

Situated nine stories above the Benjamin Franklin Parkway, the lounge boasts both open-air and glass-enclosed views of City Hall, the Philadelphia Museum of Art and Fairmount Park. The glass-enclosed bar, which seats about 35 people, will be open year-round. The outdoor lounge can squeeze a crowd of about 150 during spring and summer months.

The bar menu focuses on champagne and champagne cocktails. Highlights include a 2004 Grand Vintage Rosé Möet & Chandon sold by the glass, a French 75 and a Prince of Wales, made with Rittenhouse rye, maraschino, broiled pineapple and a top-off of champagne. Beer and wine options are also available.

For food, anticipate upper-scale bar snacks like a charcuterie board, yellowfin tuna tartare and oysters.

The minimalistic rooftop bar was designed by Bower Lewis Thrower Architects (see: The Rittenhouse Hotel), based out of Center City, and Dawson Design Associates, out of Seattle. Inside are backlit mirrored panels, a combination of modular and high-top seating and walls adorned with photography. To boot, there's a "selfie wall" near the entrance that displays photos taken at the lounge.

Guests can enter at a devoted street level entrance on Logan Circle. Though it will open at 7 p.m. on opening night, its standard hours of operation are Monday through Thursday from 5 p.m. to late, and Friday through Sunday from 3 p.m. to late.