London to the U.S. by car - via Moscow? Russia says maybe

By Bob McGovern
PhillyVoice Contributor
World Travel
Read More
A Russian transportation official has unveiled plans for a new trans-Siberian highway that would connect Europe and Russia to the United States.
Vladimir Yakunin, the head of Russian Railways, (pictured below left) presented the idea at a recent meeting of the Russian Academy of Science, according to The Siberian Times.
The transportation corridor would link Europe and Asia by a network of high-speed rail and highways, a project that would include new pipelines for oil and natural gas, the Siberian Times reported, quoting Yakunin:

"This is an inter-state, inter-civilization, project. It should be an alternative to the current (neo-liberal) model, which has caused a systemic crisis. The project should be turned into a world 'future zone', and it must be based on leading, not catching, technologies."

Yakunin said the project would likely cost trillions of dollars but insisted the economic payoff would be greater than the investment. There was no estimate provided on how long it could take to complete such a vast undertaking.
The report lacked specifics on how travelers would cross the Bering Strait, a body of water 51 miles wide at its most narrow point, between Cape Prince of Wales, Alaska, the westernmost point of the North American continent, and Cape Dezhnev, Chukchi Peninsula, Russia, the easternmost point of the Asian continent.
CNN said its "fanciful calculation" of a theoretical drive from London to Alaska via Moscow might cover about 8,064 miles. (A fantasy road trip from London to New York City might involve a trek of nearly 13,000 miles.)
As of 2014, the Russian coast of the Bering Strait has been a closed military zone since 2012, though visits are possible with the proper clearances. 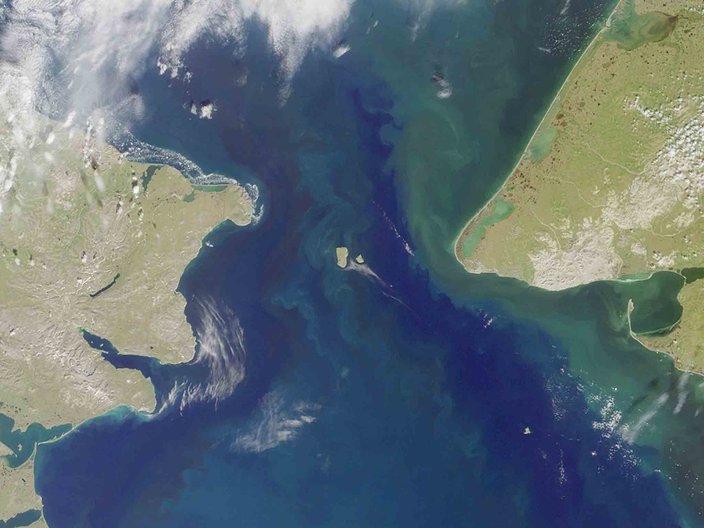 The Bering Strait, with Russia to the left and Alaska to the right, captured in 2000 by NASA's Multi-angle Imaging Spectroradiometer’s (MISR’s) vertical-viewing satellite camera. (Credit: NASA)