Made in America 2019: Road closures and travel restrictions on Benjamin Franklin Parkway

By Virginia Streva
PhillyVoice Staff
Made in America Road Closures 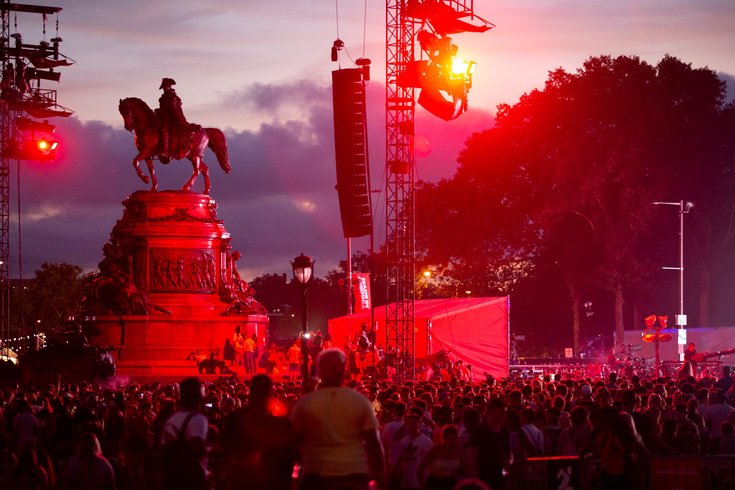 Made in America begins on Saturday, Aug. 31 and ends on Sunday, Sept. 1 with headliners Travis Scott and Cardi B. The two-day festival will cause several road closures and restrictions. Seen here is a crowd gathering to hear Kendrick Lamar perform at the Made in festival in 2018.

Made in America, Jay-Z's annual music festival, will hit Philadelphia this Labor Day weekend with headliners Travis Scott and Cardi B.

This two-day festival will begin on Saturday, Aug. 31 and go until Sunday, Sept. 1 on the Benjamin Franklin Parkway. This year's festival will feature rising star Lizzo as well as Gucci Mane, James Black, and Juice World. Philly rappers Tierra Whack and Lil Uzi Vert will also perform at the summer block party event.

Before you catch Lizzo's set on the meaning of being fabulous, you should know how the festival will impact travel and traffic in the area. Philadelphia officials have released the following road closures and parking restrictions ahead of the festival.

The closures will roll out in seven phases, beginning Aug. 25, and all closures and restrictions should reopen prior to morning rush hour traffic on Sept. 3.

•Two lanes of Eakins Oval in front of the Philadelphia Museum of Art will be closed.

•Spring Garden Street, between Pennsylvania Avenue and Benjamin Franklin Parkway will be closed.

•The inner lanes of Benjamin Franklin Parkway, between 20th Street and Eakins Oval, will be closed. However, cross traffic on numbered streets will be permitted.

•Outer lanes on Benjamin Franklin Parkway, between 22nd and 23rd Streets will be closed.

The following roads will be closed:

Drivers should take the following precautions when driving near Benjamin Franklin Pkwy. during these closures:

The following roads will be closed:

•The entire width of the Benjamin Franklin Parkway, beginning at 20th Street extending through Eakins Oval (25th Street)
•Behind the Philadelphia Museum of Art. (If you're trying to get to the Philadelphia Museum of Art, guests will be able to access the area behind the museum by following Fairmount Avenue to Pennsylvania Avenue then to 25th Street/Anne d’Harnoncourt Drive.)
•21st Street, between Winter and Spring Garden Streets
•22nd Street, between Race Street and Fairmount Avenue
•23rd Street, between the Benjamin Franklin Parkway and Fairmount Avenue
•24th Street, between Fairmount and Pennsylvania Avenues
•Spring Garden Street Tunnel
•Spring Garden Street Bridge (The city would like to keep the bridge open during Philadelphia Museum of Art operating hours, but it may have to close during periods of heavy pedestrian traffic.)
•Kelly Drive, between 23rd Street and Fairmount Avenue
•Martin Luther King Jr. Drive, between the Falls Bridge and Eakins Oval
•2100 block of Pennsylvania Avenue, between the Whole Foods store and 21st Street (However, Whole Foods Market to 20th Street will remain open to allow access to the store.)
•I-676 westbound off-ramp at 22nd Street (I-676 eastbound off-ramp at 23rd Street will remain open.)

No parking will be allowed on the following streets:

SEPTA Bus routes 7, 32, 22, 38, 43, and 48 will be detoured from their normal routes through the Benjamin Franklin Pkwy. during these closures.

Regional Rail Lines will operate late on Saturday and Sunday night departing from Jefferson, Suburban and 30th Street Stations. If the concert runs later than expected, trains are expected to wait approximately 20 minutes after the concert ends.

If you're taking an Uber, Lyft or Taxi, the 2100 block of Spring Garden St. and the 1900 block of Arch St. are designated for rideshare pickup and drop off.