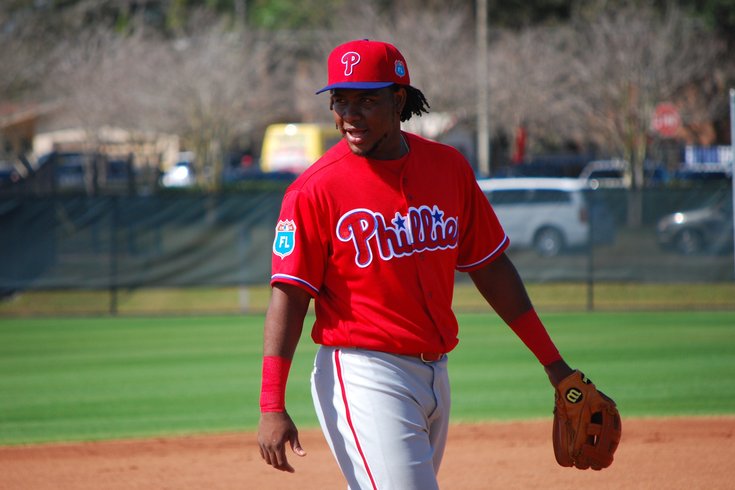 CLEARWATER, Fla. – Maikel Franco is in Phillies camp healthy and ready to build on a breakout 2015 season that all but ended two months early after getting hit by a pitch.

Franco, 23, was competing for the starting third base job last spring and didn’t break camp with the team. He wasn’t promoted until mid-May.

Franco was hit by a pitch in the left hand by then Arizona Diamondbacks pitcher-and-new teammate Jeremy Hellickson on Aug. 11 and played in just three more games for the remainder of the year, taking him out of the National League Rookie of the Year race.

“I was excited to be part of Rookie of the Year (race),” Franco said. “But it happens. It’s part of the game. Now is a new year. I have to come in and help my teammates.”

Franco played in 21 games in the Dominican Winter League during the offseason and said his hand is completely healthy.

“At the end of the season, I felt something a little bit, but it’s in good shape (now),” Franco said. “Everything is good. I’m able to do everything, (able) to put hard swings and I don’t feel anything on my wrist.”

Franco addressed several other topics on his first day in camp when he took part in field drills and hit off of live pitching during the team’s first full-squad workout of 2016. Some highlights:

On the grievance he filed this winter concerning major league service time and when he was promoted from Triple-A last season: “I don’t know about that. … Sometimes everybody has to understand it’s not my decision.”

On arriving to camp on the morning of the team’s first full-squad workout, and not, at least, a day before, as every other Phillies player has done in recent memory: “Only thing I heard is this was the day I had to report, and this is the day I’m here.”

On what he worked on this winter in the Dominican Republic: “Everything. Mental. Physical. Worked on my body. I tried to learn more about hitting. I worked on ground balls. Everything. That’s what I did in the ‘D.R.’ and that’s what I’m continuing to do.”

On becoming a more consistent defender at third base: “Yeah, that’s one of the things I’m working on and I want to work hard every single day, every single moment and try to be consistent.”

On whether he received a new suit from Jeff Francoeur, who last year promised the rookie he’d get him one if he hit 15 home runs (and gave in when it became 14 and factored in the injury): “Not really. I’ll let you know. Because I need it.”