A Philadelphia man was fined for offering a Licenses & Inspections official Phillies tickets while trying to get the department to lift a stop work order on his house.

The Philadelphia Board of Ethics announced the $1,000 fine against Tam Tran on Monday. The board said Tran agreed to pay the fine and cooperated fully with their investigation.

Tran began renovations on his South Philadelphia home in June, but was given the stop work order because of issues with permitting and insurance coverage.

After speaking with a L&I employee about the issues on the phone, Tran emailed the employee and outlines steps he would take to get the problems resolved.

Then Tran offered the employee Phillies club box tickets valued at $520, according to Board. The Board released the email in question, which reads in part:

Thanks (redacted) for your understanding. Not sure if you like Phiilies (sic) Baseball for friends and family time, let me know which game you like and I can get 4 tickets to Phillies game to relax and enjoy family time. .. Thanks Again looking forward to hear from you 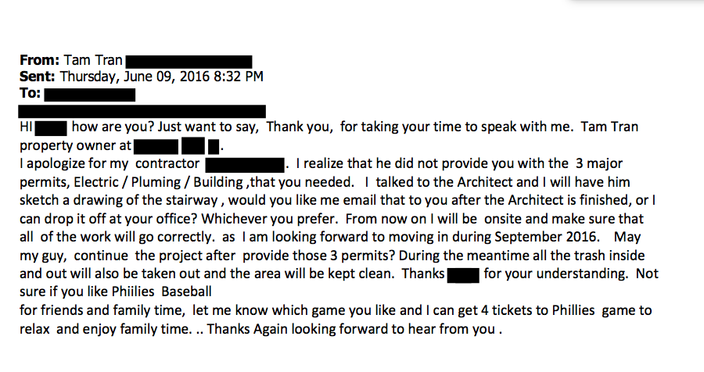 This email was sent from South Philly home owner Tam Tran to a Licenses & Inspections employee from whom he was seeking action.

It is illegal to offer a gift valued at more than $99 to a city officer or employee from whom a person is seeking official action.


The employee never responded to or accepted Tran's offer and had no further contact with him, but did lift the stop work order a few days later after Mr. Tran’s contractor took action to fix problems at the work site.