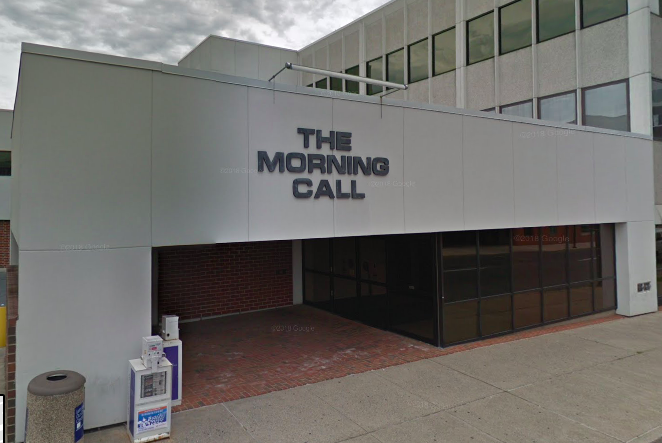 The Allentown offices of The Morning Call at 101 N. Sixth St.

A man was killed Tuesday afternoon at the offices of The Allentown Morning Call when he became pinned under a large piece of a pressroom machinery, the newspaper said in a statement Wednesday morning.

The pressroom machine was being dismantled at the building at Sixth and Turner streets in Allentown. The Lehigh County Coroner's Office identified the man as a 32-year-old contractor from Cape Coral, Florida. His name has not been released.

Newsroom workers at The Morning Call said they heard a loud boom just after 5 p.m. Tuesday. An ambulance and police arrived at the scene minutes later.

Robert York, publisher and editor of The Morning Call, released the following statement.

The Allentown printing press reportedly was being dismantled in order to be transported to the newspaper's new pressroom in Jersey City, where the newspaper's printing operations had been relocated about four months ago.

In 2012, a man was crushed to death by an 1,800 pound roll of newsprint after it fell out of a boxcar at the Philadelphia Inquirer’s Schuylkill Printing Plant

Authorities said the Occupation Safety and Health Administration has been notified of the Allentown accident and a police investigation remains ongoing.