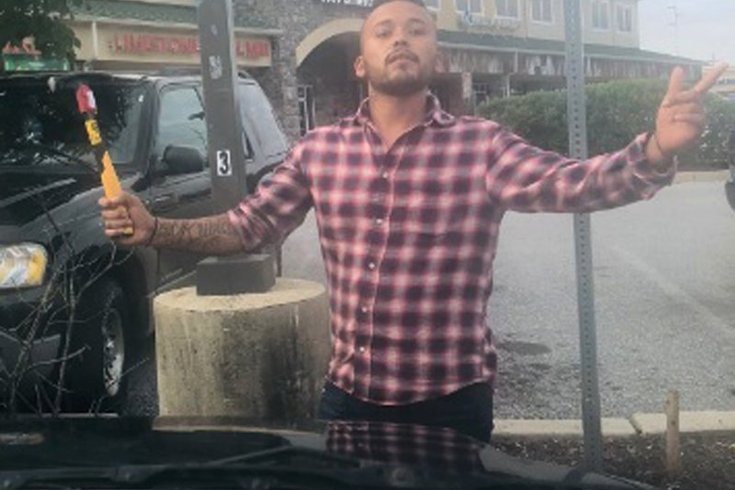 Delaware State Police say the man in this photo threatened a woman with a hammer during an incident outside a Wilmington Wawa on Sunday, Oct. 14. Police are searching for the unidentified man who is believed to be 30-35 years old, between 5 feet 5 inches and 5 feet 9 inches tall, and was last seen driving a brown or gray Ford Explorer.

Delaware State Police are looking for a man who allegedly threatened a woman with a hammer in the parking lot of a Wilmington Wawa over the weekend.

The woman was able to snap a photo of the suspect, showing him holding the hammer, which state police have released to the public.

Police were called to 2030 Limestone Rd. in Wilmington around 4:30 p.m. on Sunday. There, the woman, 31, told police how the suspect stood outside her parked vehicle and allegedly threatened her when she would not exit and speak with him.

The woman told police the encounter began while she was shopping at a store on the Kirkwood Highway and she noticed the man had allegedly followed her inside. The woman felt uncomfortable, left the store and drove to the Wawa, but soon realized the suspect had followed her in his vehicle, according to police.

The suspect allegedly parked his vehicle immediately behind the woman, blocking her from moving her own vehicle, police said. The man allegedly then got out of his car and banged on her vehicle's window, demanding she get out and talk to him, police said.

When she refused, the suspect allegedly returned to his vehicle and got a hammer, which he allegedly waved at the woman, again demanding she exit the car.

The suspect eventually fled after she refused, police said.

Delaware State Police are looking for the unidentified man, who is described as 30-35 years old, between 5 feet 5 inches and 5 feet 9 inches tall,  and driving a brown or gray Ford Explorer.

Information regarding the suspect and investigation can be provided by calling Delaware crime stoppers at (800)-TIP-3333 or online here.