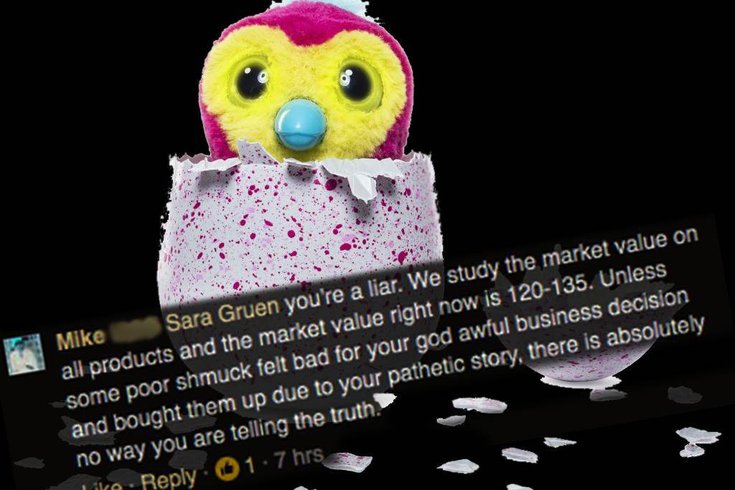 Mike Zappa and his brother cashed in on the Hatchimals craze before such a thing existed. He's since given an online lecturing to Sara Gruen, who was hoping to profit on the fad-toy madness with a buy-high-sell-higher strategy.

Another day closer to Christmas, another twist and turn in Sara Gruen’s Hatchimals saga.

In one corner, we have the New York Times best-selling author who shelled out $23,595.31 on successful eBay bids to snag 156 of the hot-button Christmas items.

She admittedly overpaid the day after Black Friday to stockpile Hatchimals in an effort to help fund the defense of “an innocent man who’d run out of options while serving life without parole.” (Yes, she told me the details of the case, which I verified; no, I won't share them until they're considered on-the-record.)

She would soon feel the online fury of people blaming her for taking the $59.99 toy out of the hands of the children of the world.

In the other corner, we have Mike Zappa, an Arizona man who – along with his brother Stan – dropped roughly $5,000 to buy 100 Hatchimals in early October “with the hope of reselling them at a profit during the frenzied holiday shopping weeks ahead.”

By the time Gruen made her purchases, the Zappa brothers had recouped their investment and still had 60 Hatchimals to unload.

So, yeah, their entrance into the Hatchimals-resale market went substantially better than Gruen's, who despite unloading quite a few of the toys since the initial PhillyVoice story ran still has a ways to go to break even.

"We are not trying to be negative here, but spending $24,000 on a product at its inflated price is probably the worst business decision we've ever seen in terms of economics." – Mike Zappa

As you can see from Zappa’s Twitter feed, the brothers are quite proud of their business savvy, spurred by a tip from his 10-year-old daughter.

While the brothers said they faced some criticism as well, that didn't stop Zappa from slamming Gruen’s buying bing. Like a Tuesday post on Facebook that drew a contrast between the two entrepreneurial strategies, claiming Gruen only acted after seeing a story about their venture.

“This woman reacted to a market well into the demand craze around Black Friday. Now she has inventory and she can't get rid of them! Every day that goes by, the market for a product adjusts as the demand begins to settle!” it read. “This is what you call, an idiot!

It's #BLACKFRIDAY! Don't be left out in the cold. No line, no stress! #Hatchimals AVAILABLE. All colors. Safe and easy PayPal transaction. pic.twitter.com/16Lazm8aIk

"Because eBay and amazon have restrictions on sellers, one can only list a few a week. In fact, new sellers can only list 3 a week. That's a total of 9 she can sell before Christmas. She has over 150 to offload in a 2 week time span. Not happening.”

It didn’t stop there.

Over on Gruen’s Facebook page, Zappa shared economics lessons, his claims that he’s “pretty sure (seeing a news story about the brothers) is what made you ‘pull the trigger’ on this business venture” and assertions that Gruen's "a liar.'”

PhillyVoice caught up with the Zappa brothers via Facebook Messenger on Thursday morning to let them expand on their thoughts.

"We read your story and couldn't believe our eyes. Buying 156 units at $150 is asinine, especially when the toy retail value is $49 and she bought them at inflated 'market value,'" Mike Zappa responded. "She tells us she sold 90 at $190. No way. We've been selling these for five weeks and know the 'market value.'

"We are not trying to be negative here, but spending $24,000 on a product at its inflated price is probably the worst business decision we've ever seen in terms of economics. Economics 101: Buy low, sell high."

He touched on the differences in approach, as well. 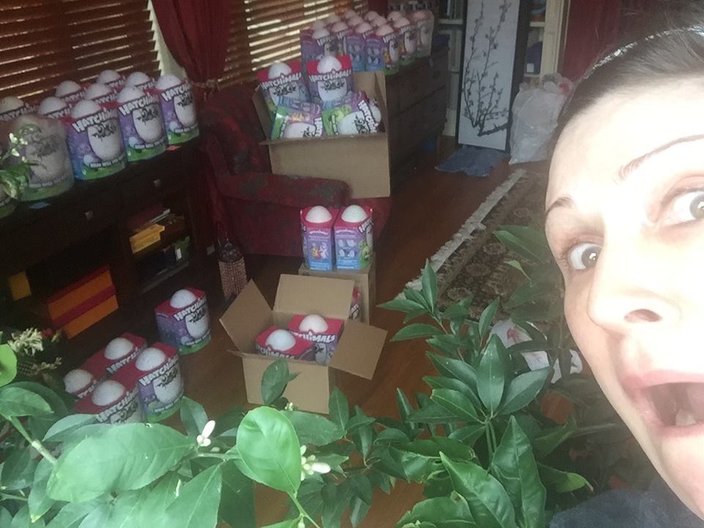 "We never inflated the price. We put them up on eBay as an auction and let the market dictate the value. Two weeks ago, when (Gruen) bought hers, the market was around $200 for a couple days. As we sit today, the market is $120 and dropping as new supply floods the market," he wrote. "Luckily for us, we sold all of ours and have bowed out of the Hatchimals business. She got into the game way too late."

"It's insane. It sounds like he's upset I stole their idea or something," she said, noting she saw a story about the Zappas on Google while researching the demand for Hatchimals before she started bidding. "Seeing their story probably did inform my decision, but it's not what caused it, although why would it matter if it did?

"He's sitting there comfortably nestled among the people kicking me when he's the one who actually and literally scooped all the toys off the shelves so parents didn't have the hope of buying them. There's something very wrong here. I don't give a hoot about his economics lesson. He also put that I was a 'business professional.' No, I'm a writer. English major. Can't do math to save my life. And what's it to him? Is he jealous that I'm getting this attention? Because, believe me, he's welcome to it."

And that is all for Today in the Christmas Season Hatchimals Saga, but stay tuned because it doesn’t seem as if this one’s going away anytime soon.