Study looks at demographics of 'cyberchondria' 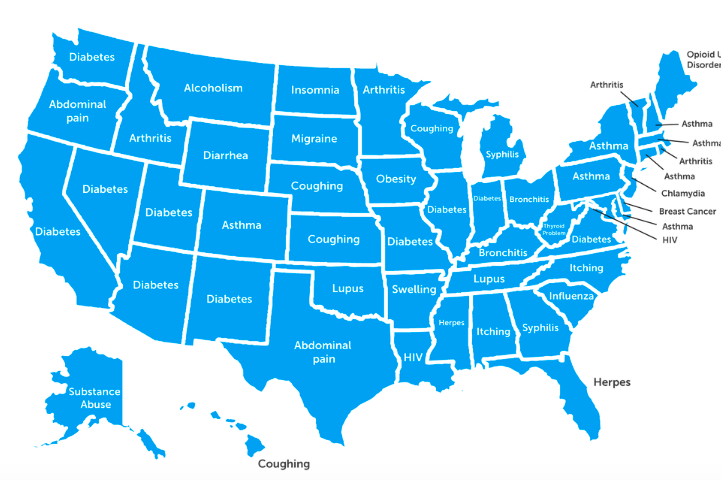 Map of most commonly searched health concerns in the United States.

We've all been there.

It's 4 a.m and every body part is suddenly malfunctioning except the eyes we need to look up symptoms on WebMD and Mayo Clinic. We're all going to die.

This is the double-edged sword of having instant access to "diagnostic" information. Even when we know we should see a doctor, we go to the length of scaring ourselves as motivation to actually set up an appointment.

"In most cases, there’s probably nothing to worry about, but that doesn’t seem to stop us from diving down the bottomless pit of Google-induced hypochondria," wrote the authors of a MedicareHealthPlans study on the most commonly searched health concerns.

Using Google Trends data, the study put together a map of the most searched ailment in each state. These search terms were then compared to the incidence of various conditions across the country to see what kind of correlations exist.

In Pennsylvania and much of the Northeast, Asthma was the most commonly searched health concern. For the 14 states whose search term was asthma, the leading cause of death after heart disease and cancer tended to be respiratory diseases and stroke.

The study also found relationships between the search terms of states with high incidences of diabetes, obesity and various sexually transmitted diseases. Chlamydia was the number-one term in New Jersey.

In states where more people were obese, residents were less likely to look into the consequences of being overweight, while those with high rates of STDs often searched for information about itching.

"From STDs to coughing, each state has its own prime paranoia," the authors wrote. "If you’ve found yourself worried you have a fatal disease thanks to a quick Google search for 'itching,' rest assured you’re not alone."