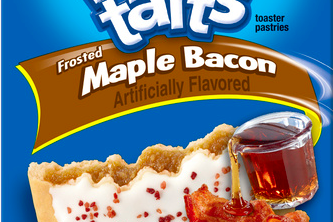 Maple Bacon is among five new Pop Tart flavors Kellogg's is introducing over the next several months.

Kellogg's Pop Tarts are in their 51st year of existence, and as the beloved breakfast snack prepares its return in the Halloween flavors Pumpkin Pie and Spookylicious, fans of the toasted pastry can look forward to five new flavors that will explore previously uncharted territory.

The company announced the flavors will debut over the next several months, starting with the dessert-themed Chocolatey Caramel, which is pretty normal, granted, but skips right past breakfast in a clear sign Kellogg's considers the product an all-day snack option. That will hit shelves by December.

Up next, the limited edition Maple Bacon will keenly tap into a national bacon craze that has even seen the proliferation of bacon-based spreads. According to the company's description, the new flavor, also available in December, will feature a golden crust packed with a maple-bacon filling and topped with white frosting, including salty and smoky "crunchlets" showered on top.

Frosted Watermelon, again hitting stores in December, will attempt to help kids everywhere get through the cold months of the school year with a "flash" of summer.

In a variation on its classic flavor, Frosted Spring Strawberry Pop-Tarts will be emblazoned with illustrations to make you laugh while you eat them. These will be out in April.

Finally, a sweet-tart style Pink Lemonade Pop-Tart will be available in April, with crunchy pink and yellow sprinkles.

How much appeal these will have remains to be seen, but you can't fault Kellogg's for trying to find new ways into hearts and pantries.