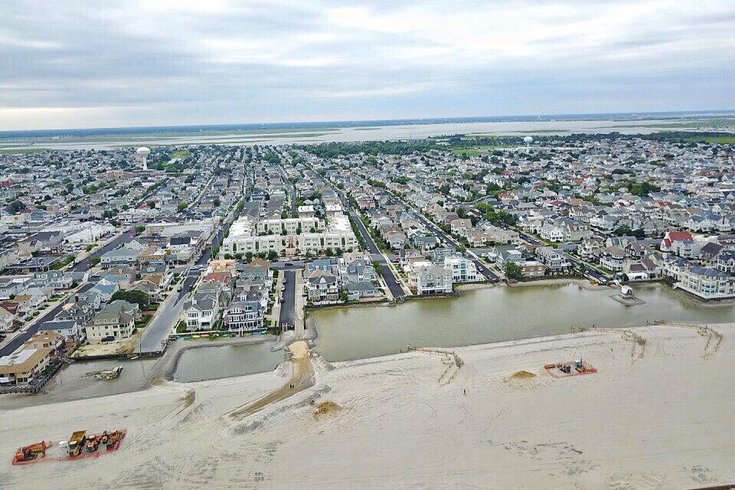 “Let’s be honest and call it what it is: It’s a giant cesspool!”

That’s the view of Margate city commissioner Maury Blumberg as he speaks of the enormous ponds of water that have formed as a result of the dunes being built by the Army Corps of Engineers on the town's beachfront.

Problem is, stuff – waste from gulls, pigeons, cats, dogs and in some cases people – happens.

Stormwater runoff heads to the lowest point. Along the coast of Margate, that’s the ocean – unless something, such as dunes or berms, block the way.

Water that sits in shallow pools for two or three days without evaporating or perking down beneath the surface can be warmed by the sun and act as a giant petri dish.

He’s aware of just one 30-year-old academic study of how much fecal matter makes its way toward the beach.

In that study, a graduate student estimated every year 13 tons of pigeon and seagull excrement are deposited on the rooftops of nearby Atlantic City.

"Our experts told the court this would happen." – Margate City solicitor John Scott Abbott, of the massive ponding on the beach

Trouble is, all that waste washes down to street level eventually.

And while Margate isn’t as urbanized as Atlantic City, the natural slope in Margate means all that excrement heads toward the ocean.

“They thought the water would perk down,” into the sand, says Blumberg, an opponent of dune building.

“I think their math is wrong. They are out of their minds. The rainstorm over the weekend has proved they are wrong,” he adds.

The state Department of Environmental Protection and the Army Corps met Monday to discuss the issue, spokesman for both agencies confirm. But no word on any changes – yet.

Which is why the Margate commission has called an emergency meeting for 11 a.m. Wednesday “to discuss possible litigation” against the Corps and the DEP. The city had hoped to hold the meeting Tuesday, but that would not have complied with the timing required for legal notices.

While the meeting is closed, Blumberg say he expects an announcement afterwards, followed by a formal vote at a regular commission meeting at 4 p.m. Thursday.

City solicitor John Scott Abbott said the aerial picture of ponding “tells everything. Our experts told the court this would happen.”

Abbott said while an anticipated legal action will likely call on the Corps to stop all work “until they get it figured out,” the more likely result is “coming up with a concrete game plan,” to address the ponding.

Margate resident Dan Gottlieb, who was among homeowners who had opposed the Corps building dunes in the first place, said seeking “injunctive relief is a long shot, but it needs to get addressed.”

Next door in Ventnor, resident Pat Shield says he’s worried ponding will happen once the corps moves to his town. He says the issue has been unmentioned by the Corps and the general public is unaware. He worries that bacteria remain even when pools dissipate.

'A LOT OF ZEROES'

Larry Hajna, a spokesman for the DEP, said the issue being put to the Corps is if the ponding was “just an aberration” caused by exceptionally heavy rainfall, or “does it need to be addressed. Is there a structural fix?”

Stephen Rochette, a spokesman for the Corps, said the beach engineers and the state are talking and the water is being “monitored.”

“Beyond that, there’s not much I can say,” adds Rochette.

Hajna said while the state tests water quality in selected beach and bay areas, it does not monitor the quality of ponded water. Water tainted with feces can cause gastro diseases, earaches and infections.

Farrell said Wildwood had done its own testing years ago, but he was unaware of any other monitoring.

And the professor says fixing the ponding now does not assure it remains fixed.

Perk rates – the amount of water absorbed below the surface – change over time, cautioned Farrell. Water drains slower and slower as mats of organic material sink to the bottom of depressions, acting like a giant coffee filter.

Farrell said changing drainage now could add “a lot of zeroes” to the work. The work is already expected to cost at least $63 million.

The dune work will also extend into Atlantic City and Longport, creating just over eight continuous miles of dunes.