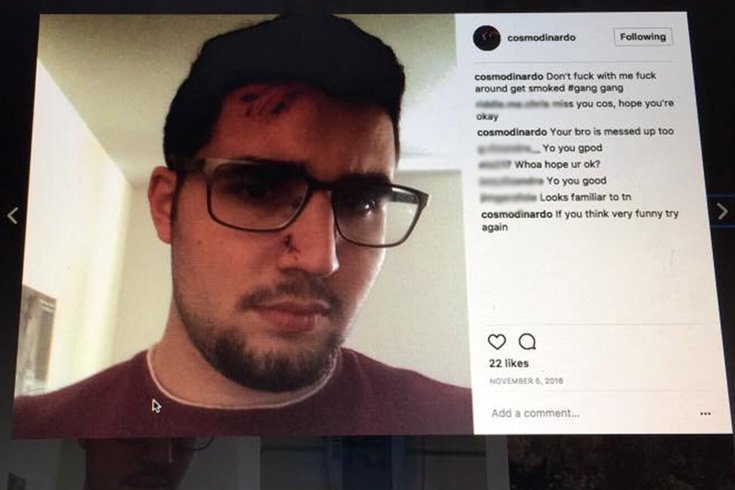 An acquaintance of Cosmo DiNardo through a common interest – sneakers – provided members of a Facebook group about the Solebury murder case a look at the alleged killer's Facebook and Instagram pages in the days and months leading up to the crimes. "There was a lot of curiosity among the members of the group to see what was going through his head from the past all the way up to the murders," said Vincenzo Giovanni Palmucci of South Jersey.

The tragic case of four young men murdered and buried on a suburban Philadelphia farm earlier this month caught the interest of people far and wide – and now many of them have a better understanding of one of the men charged in the slayings.

From its onset as a missing-persons case, the investigation and search for the four men captured local interest. But in the days that followed, as more information was reported and it became clear that heinous crimes were committed in a quiet Bucks County town, the case went national and international.

By the time investigators unearthed evidence and interviewed a 20-year-old Bensalem, Bucks County, man for a second time, they had his confession.

DiNardo implicated a cousin – Sean Kratz of Northeast Philadelphia – in the mass murders as well. Both men are charged with murder and related offenses in the slayings and have pleaded not guilty.

Several Facebook groups popped up as the news broke – including one that purported to show support for DiNardo.

With more than 9,200 members as of Thursday afternoon, the group includes people from the area and across the nation discussing the facts of the case as well as theories on DiNardo's motives. In addition to the Web detectives who wanted to know what happened, many now seem determined to understand why the four young men were murdered. Many express their hate and ill wishes for DiNardo and Kratz.

On Wednesday, hundreds of people in the group joined a fellow member and casual associate of DiNardo for a live "stalk session" of DiNardo's social media.

Another video – more than 42 minutes in length – recorded Palmucci scrolling through DiNardo's Facebook feed, reading posts and comments from as far back as 2013 for members of the group who tuned in to watch and ask him questions in real-time.

The videos – posted on the group's page – have been viewed thousands of times.

'A LOT OF CURIOSITY'

In an interview Thursday afternoon via Facebook, Palmucci said he livestreamed because of the high level of interest in the group.

Palmucci, 21, said he was surprised by the reaction he received after livestreaming.

"Everyone in the group was really intrigued with seeing all his social media for the most part," he said. "It gave them a look into the upcoming days where he went overboard."

Palmucci first communicated with DiNardo in 2014 about sneakers. DiNardo would sell sneakers to him. There was no contact for two years after until DiNardo texted him in March looking to sell Palmucci sneakers to raise some money. They met so Palmucci could pay DiNardo for his purchase.

"But he was always, like, weird, when I talked to him," had told a viewer about what DiNardo was like. Palmucci said DiNardo would jump from topic to topic, like he had ADHD. "He was always bragging about something stupid."

The social media posts – especially those since last fall – provide a look at a young man who was extremely comfortable around guns and seemingly becoming increasingly isolated in the months leading up to the murders.

Much of his Instagram presence revolves around hunting for deer and coyote.

One Instagram post from Feb. 18 showed an unidentifiable person in a hospital bed. DiNardo reportedly was seriously injured in an ATV accident in early 2017.

His posts in April focus mostly on sneakers.

Palmucci said DiNardo "would pay homeless people to stand in line for him to buy sneakers" at release events. 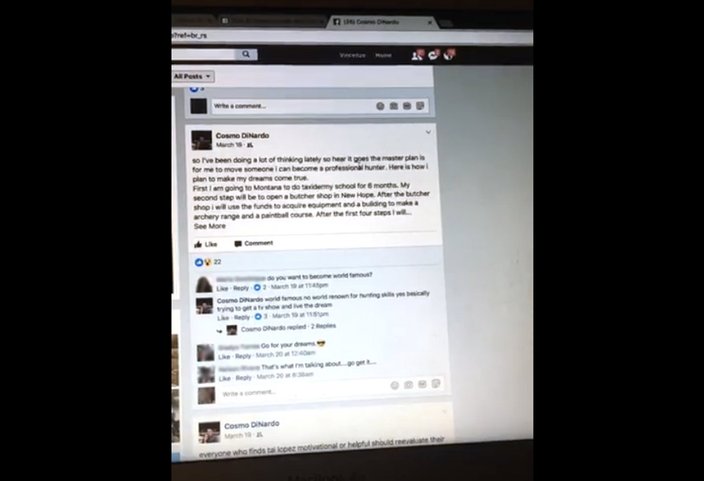 In a March 19, 2017 post on Facebook, Cosmo DiNardo laid out his master plan for life, including butcher and taxidermy businesses.

Why do girls think its okay to give top to other men while they are in a relationship.

[In a response to a question, DiNardo defines "top" as oral sex, though he uses a different two-word term for it.]

DiNardo posted: "In a relationship."

I have no luck when it comes to woman

I am a savage no explanation needed!

Later that day, he posted:

[Jan. 22 was DiNardo's birthday. He received a number of birthday wishes from Facebook friends.]

It's official I have no more friends

[DiNardo posts a photo of a dead coyote shot during a hunting event.]

Who on here uses Tinder and is successful with it

I need to buy some friends

so I've been doing a lot of thinking lately so hear it goes the master plan is for me to move someone I can become a professional hunter. Here is how i plan to make my dreams come true.

First I am going to Montana to do taxidermy school for 6 months. My second stop will be to open a butcher shop in New Hope. After the butcher shop, I will use the funds to acquire equipment and a building to make a archery range and a paintball course. After the first four steps I will yu sed the funds to buy property in different states mainly out west and florida as well as South Africa ad Equiatorial Africa. Once I buy property the next move is to use the friends I have made at the butcher shop and taxidermy to go guide hunts for whitetai bear and alligator as well as elk and other small game and predators. I plan to have all this in place by the time I'm thirty years old. 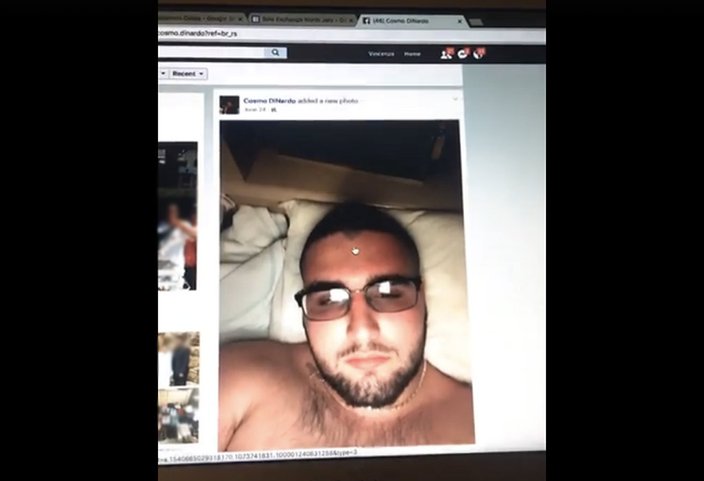 Cosmo DiNardo posted this selfie on Facebook on June 24, 2017, less than two weeks before he killed Jimi Taro Patrick, 19, of Newtown, Bucks County, on the family farm.

I need 10 people to camp out with me for the royal 1s [sneaker release] compensation will be $50 and food and beverage of your choice.

The first couple of days in April including many postings of new sneakers for sale.

when mom starts the convo off with listen u fat fuck

In several messages from June, DiNardo was seeking Facebook friends to join him for concerts and parties. Most of those posts had only a couple of likes and no responses.

who's down for thomas rhett [concert] saturday

party and fire tonight hit me up for the details

meeet me at the trails its going down

Who's trying to chill and grab some food

party at my house tonight

should I bic my head

I'm the big bad wolf come to blow your house down

It's nightmare on elm street and guess who's playing Freddy

Later that Wednesday, DiNardo allegedly shot and killed Jimi Patrick in a remote area of the farm, he told prosecutors later.

Best methods to fall asleep? Other than sleepy pills and shitty tasting tea oh and working out doesn't make me tired FYI

[He engages in a lengthy back-and-forth name-calling with a girl in the early morning hours of July 6.]

where the working men at

Later that Friday, the three other men visited the farm where they were shot and killed, according to DiNardo's confession.

Yo bro alot chatter going around about u having something to do with what's going on. What's the deal bro? I u know any thing u need to loosin the lips n come out with it bro fr fr this is getting out of hand fast!!!!

Tom Meo!! Mark Sturgis!! I hope there names n faces keep you up at night for the rest your life. Each one of them are a million times more than u will ever be!!!

Sometime Thursday, Cosmo DiNardo's Facebook page was taken down. It was unclear whether the social media platform or his family was responsible. Many in the group speculated that the livestream prompted the takedown.

"It's a very good possibility," Palmucci said Thursday. "Very weird how it went down the day after."

For his part, Palmucci said he wasn't really surprised to hear the news that Cosmo DiNardo had confessed in the murders.

"Not really, there was a weird side to him," he said. "When they said he did it, I kind of just took their word for it because of the vibe he would give me when I would meet him."