A woman has taken to Facebook to warn others about the dangers of engaging – and meeting with – strangers on social media.

To illustrate her warning, she posted Facebook messages she claims were sent to her by Cosmo DiNardo, who was until Thursday characterized by authorities as a "person of interest" in the investigation of the disappearance of four young men in Bucks County, one of whose remains were already found in a 12-foot deep "common grave."

The woman posted screenshots of messages allegedly sent by DiNardo in January, in which he makes multiple unrequited romantic and sexual advances.

DiNardo, 20, confessed Thursday to the murders of the four men, but charges have yet to be announced by the district attorney. He had already been charged in connection with the theft of a car owned by one of the missing men, 21-year-old Tom Meo of Bensalem. He is being held on $5 million bail.

The woman's post noted DiNardo's status as a person of interest in the case. She specified that she's not claiming DiNardo's intentions with her were "malicious," but said the messages were "not how anyone should talk to a stranger online."

In the screenshots of the messages, DiNardo appears to make repeated attempts to get the woman to date him, advances that are either turned down or ignored. (She has since removed the screenshots from her Facebook page.)

Other messages are less subtle. One reads: "i wanna make babies.” Another reads: "lets have sex.” At that point in the conversation, the woman had stopped responding.

"This post serves no other purpose than to warn other females/people to be cautious with who you choose to talk to/ associate with online," the woman wrote. "It also serves as a warning to be careful who you decide to meet in person when contact is first made through social media."

She said she posted the messages solely to draw attention to safety for women and show DiNardo's "character," adding doesn't want "any negativity" in her life and that she would delete aggressive or threatening comments from the post. 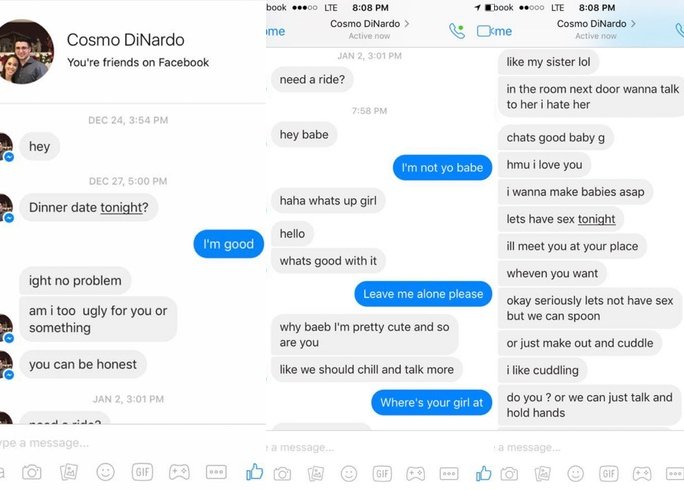 These screenshots of messages were posted to Facebook by Ashley Lauren Mancini. The messages are from Cosmo DiNardo, who is a person of interest in the disappearance of four young men in Bucks County.

The woman declined to comment further on the messages to PhillyVoice, but did indicate that the messages were from January.

Others who commented on the post, which has been shared nearly 600 times as of Thursday afternoon, claimed they had similar experiences with DiNardo.

Another woman posted screenshots of Facebook messages with DiNardo, which showed him trying to contact her over the course of 10 days without her responding.

She wrote that she hung out with him once at the gym, but his attempts to hit on her made her uncomfortable so she didn’t see him again.

Another woman named wrote that DiNardo had messaged her over the course of two years about "the same stuff" and ignored her requests for him to leave her alone.

Police have been searching the farmland owned by DiNardo's family in Solebury Township since Sunday.

DiNardo was first arrested on Monday for an unrelated gun charge. His father put up $100,000 bail, but DiNardo was back in custody Wednesday after he allegedly tried to sell Meo's 1996 Nissan Maxima for $500.

Absent new information to release publicly, authorities released a new tip line Thursday morning as the search continues. Anyone with information is asked to call 1-800-CALL-FBI and select option No. 7.