'This is real life, it can be any of us,' teammate Dez Bryant said of Barber's death 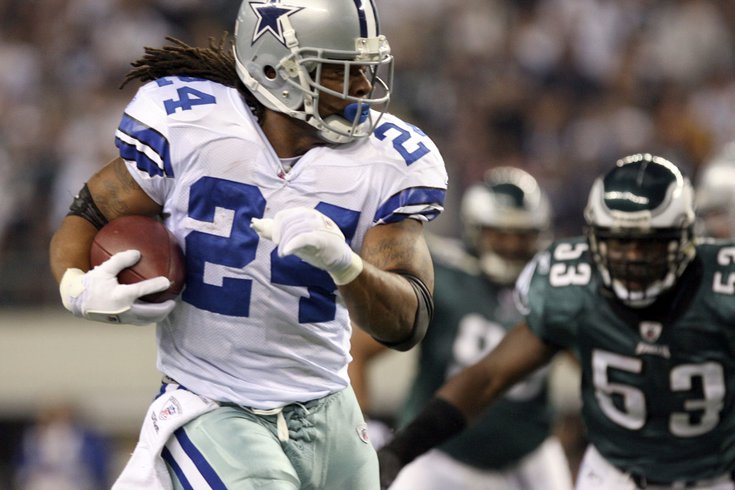 Marion Barber, 38, spent seven seasons in the NFL and was best known as a power running back on the Dallas Cowboys from 2005-2010. Barber was found dead at an apartment in Frisco, Texas on Wednesday.

Former Dallas Cowboys running back Marion Barber was found dead Wednesday afternoon at an apartment in Frisco, Texas. Police had been called to the apartment for a welfare check on Barber, who was 38 years old.

Officials have not yet determined a cause of death and an investigation remains ongoing. Barber was "unattended" at the apartment at the time his body was found, authorities told NPR.

Barber spent seven seasons in the NFL, including six in Dallas, after the Cowboys selected him with a fourth round pick out of the University of Minnesota in 2005. His bruising running style, usually deployed in a complementary role, gave the Cowboys a rushing attack that pummeled defenses in chunks.

Barber amassed 4,780 rushing yards and 53 rushing touchdowns during his NFL career, including a high of 975 yards and 10 touchdowns during the Cowboys' 13-3 season in 2007. He earned a Pro Bowl selection that year and lived up to the nickname "Marion the Barbarian." His final season was spent with the Chicago Bears.

"We are heartbroken by the tragic death of Marion Barber III. Marion was an old-school, hard-nosed football player who ran with the will to win every down," the Cowboys said in a statement Wednesday. "He had a passion for the game and love for his coaches and teammates. Our hearts go out to Marion's family and friends during this difficult time."

After hearing of Barber's death, former teammate and wide receiver Dez Bryant shared a video on Twitter discussing the mental health of NFL players. He had tweeted last year that Barber was "down and out bad."

Too much to digest, so much too say... This is real life, it can be any of us. We need each other, we need unity… RIP Marion Barber may God rest your soul 🙏🏿 https://t.co/VUth08bxDG pic.twitter.com/cTselDGHc2

"We can't be walking around here thinking that it's not going to be me," Bryant said. "Because it's been more 'mes' than any one of y'all can even imagine. Marion Barber, 38 years old. Vincent Jackson, he was in his thirties — young."

The Frisco Police Department is working in conjunction with the coroner's office to determine the cause of Barber's death.