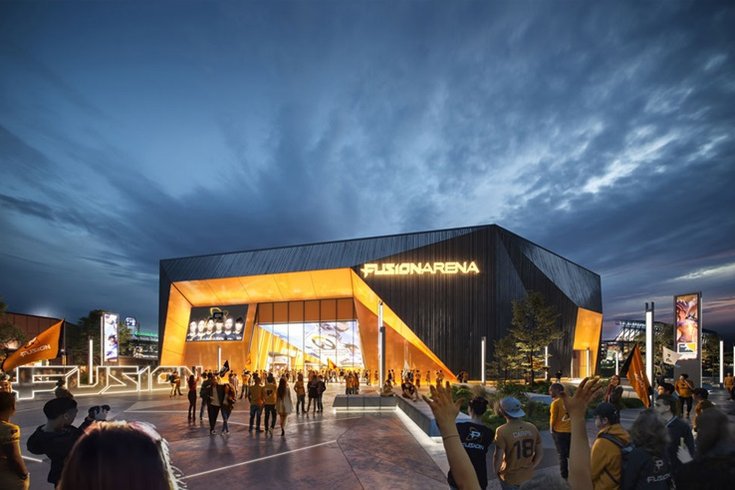 Comcast Specactor's plan for Fusion Arena, a 3,500-seat esports facility at the Stadium District in South Philadelphia, has been put aside as the company works on a new development plan in the stadium district. The company still aims to create space for esports as part of its future plan.

Comcast Spectacor is re-examining its development plans at the sports complex in South Philadelphia in light of the effects of the COVID-19 pandemic.

A 3,500-seat esports arena for competitive gaming and an office complex along Pattison Avenue are now being modified as part of Comcast-Spectacor's development blueprint for the land it holds in the stadium district, a spokesperson told PhillyVoice.

A new strategy hasn't been determined concretely, but Comcast Spectacor is intrigued by the idea of developing its properties in a way that would mirror fan viewing areas in other cities, most notably Toronto's Jurassic Park for the Raptors and Milwaukee's Deer District for the Bucks.

Technically, the land in the stadium district is owned by the city and leased to the Philadelphia Authority for Industrial Development, which then subleases the land to Comcast Spectacor and the other stadium owners. Comcast Spectacor has certain development rights that come with the lease, which was written to leave room for new amenities when the city established the ground rules a few decades ago.

In 2019, Comcast Spectacor touted a $50 million plan for the Fusion Arena, a 60,000-square-foot facility that would serve as the home of the Philadelphia Fusion, which competes in the Overwatch League. The project, then described as a joint venture with The Cordish Companies, was envisioned as an East Coast hub for the burgeoning esports entertainment industry. The Cordish Companies developed the Live! Casino & Hotel that opened last year in South Philadelphia.

Comcast Spectacor also unveiled plans in 2019 for Pattison Place, a 200,000-square-foot office and retail complex near Broad Street and Pattison Avenue. The office building was touted as a project that would bring 1,670 new jobs and generate $295 billion in economic benefits for the city and state over a 30-year-period.

The impact of the pandemic has changed Comcast Spectacor's thinking about how to approach the development of these spaces.

The company spokesperson said there is still interest in creating a space for esports at the sports complex, but any new venue would now be a more of a multipurpose facility. It could include a concert venue and restaurants in addition to a space that could be used for esports events.

One reason for the change in plans is the way the esports industry has adapted to the pandemic. The closure of venues pushed esports more firmly into the realm of streaming, where the biggest winners have been Twitch, Facebook Gaming and YouTube Gaming.

Streamlabs, a company that tracks esports industry trends, reported that people watched more than 7.46 billion hours of content across all live streaming platforms for gaming in the third quarter of 2020, a year-over-year increase of 91.8% compared to the same quarter in 2019.

By the first quarter of 2022, the three biggest platforms accounted for 8.06 billion hours of content streamed. The growth of streaming in the gaming world has leveled off in the past year, but virtual viewing remains dominant in esports even as live events return.

Comcast Spectacor determined that the demand for a single-purpose esports venue at the sports complex simply doesn't make sense in the world after the pandemic, the spokesperson said. There has been a shift toward corporate sponsors for esports teams instead of city-affiliated teams, even though some established teams continue to have hometown affiliations.

There isn't a specific plan for a new venue to replace the planned Fusion Arena at this time, but Comcast Spectacor still envisions a facility that will hold live esports events in the future. The company wants to build a space that can accommodate a broader range of events and interests.

Likewise, the work-from-home trend during the pandemic altered Comcast Spectacor's plans for Pattison Place. Even as some workplaces bring employees back to offices on a full- or part-time basis, the future of commercial office space remains too uncertain to pursue the Pattison Place project as it was originally planned.

The company's mindset regarding its available land at the sports complex is now more entertainment-focused and positioned around the four major pro sports teams that play there, the spokesperson said. Xfinity Live!, built in 2012, has been a successful draw that brings large numbers of fans to the stadium district on game days, even if they are not attending the games.

By now, NBA fans have become familiar with footage of raucous fans in Toronto and Milwaukee, where Jurassic Park and the Deer District are packed with crowds in outdoor viewing areas — especially during the playoffs. Comcast Spectacor believes this is something the stadium district may be able to emulate to even greater effect, because all four major Philadelphia teams play there. The company also is keen on potentially adding retail and restaurants to the stadium district.

Other than following lease obligations about the size and location of development proposals, Comcast Spectacor's only major requirement is to maintain a certain number of parking spaces to ensure that people attending games and events can be accommodated. This includes the consideration of dates when two or more events are being held at the sports complex.

Sam Rhoads, the executive vice president of the Philadelphia Industrial Development Corporation, which serves as the stadium district's landlord through PAID, said an outdoor viewing area for fans would be within Comcast Spectacor's development rights. Rhoads said he considers Xfinity Live!, which has a small outdoor area, a precursor to the kind of outdoor space that could be developed if Comcast Spectacor chooses to go in that direction.

And despite some grumbling about getting in and out of the lots at the sports complex, Rhoads said his colleagues around the country view Philadelphia's stadium district as among the most efficient in the United States thanks to its public transit access.

Comcast Spectacor's previous plans for Fusion Arena and Pattison Place had been reviewed by PIDC, but never got to the stage of final approval by the time the pandemic hit. The company's development plans were temporarily stalled, across the board, but the focus in recent years has been transforming and modernizing the Wells Fargo Center.

Comcast Spectacor has invested more than $300 million into the arena in a bid to keep the 76ers there for the long-haul. Formerly owned by Comcast Spectacor, the Sixers are now owned by Harris Blister Sports & Entertainment.  They have been flirting with the idea of building a new arena in Philadelphia.

In 2020, the Sixers were among several groups to submit a proposal for the redevelopment of Penn's Landing. The team's plan called for an 18,500-seat arena that would include $4 billion in funding from the 76ers and about $700 million in public financing. That proposal was rejected and the Delaware River Waterfront Corporation ultimately went with a $2.2 billion plan from the New York-based Durst Organization, which will rebuild the waterfront with a mix of residential, retail and hotel developments. The chosen plan does not require any public subsidy.

Comcast Spectacor currently is working on a $50 million renovation of the Wells Fargo Center's club level spaces, including four new bars and enhancements to the arena's seating and technology.

There is no immediate timeline to unveil plans for the land that was previously designated for Fusion Arena and Pattison Place, the Comcast Spectacor source said. It's unclear how any future plans may impact existing parking between the Wells Fargo Center and NRG Station, and out to Pattison Avenue where the office tower had been planned.

Comcast Spectacor is clearly motivated to utilize the land it leases in ways that promote entertainment for Phillies, Flyers, Eagles and Sixers fans who want to be part of the game day experience. The pandemic has been responsible for some major changes in the way developers are projecting future projects, but banking on the rabid fandom around Philly sports remains as safe a bet as any.