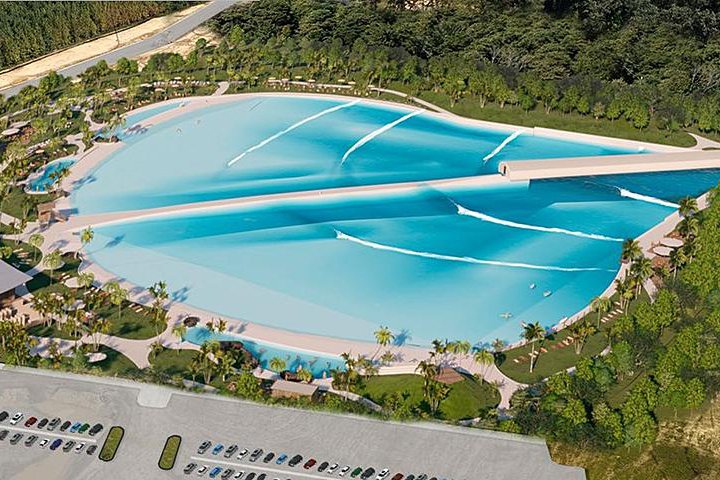 A 5.5-acre surf lagoon is planned as part of the Adventure Crossing USA development in Jackson Township, New Jersey.

Adventure Crossing USA, a theme park and lodging complex being built in Ocean County, will add a large surf pool and water park in the years to come. They will complement a sports and entertainment facility set to include bowling, golf, indoor climbing and other activities.

The Jackson Township Zoning Board last month approved the fourth phase of the Adventure Crossing development, which is taking shape on Route 537 between Interstate 195 and the Six Flags Great Adventure theme park. Adventure Crossing is about 60 miles from Philadelphia.

The 88-acre expansion for the fourth phase, approved by the zoning board on April 20, spells out plans for a 5.5 acre, surfing lagoon that will generate more than 500 waves per hour. The lagoon will be crowd-controlled to make the experience smooth for people who are in the water at any given time. It is being built by Wavegarden, an engineering firm that specializes in surf park facilities.

In addition to the surf lagoon, there will be an adjacent 70,000-square-foot indoor park.

Other amenities planned for Adventure Crossing include an axe-throwing facility, basketball courts, bocce ball, an arcade, laser tag and a cigar and scotch lounge.

There also will be a medical campus comprised of two, five-story buildings that each contain about 100,000 square feet of commercial space. In addition to a physical therapy and rehabilitation center, it will include space for dentists, surgeons and pediatricians.

The Jackson Township Zoning Board approved the latest phase by a 6-1 vote, but some community members expressed concerns about the power plant and called for a more thorough environmental review, NJ.com reported.

Cardinale Enterprises is behind plans for multiple mixed-used and residential developments in New Jersey, including projects proposed in Manalapan and Barnegat Townships.

The developer has not yet provided a timeline for the construction and completion of the surf lagoon and waterpark at Adventure Crossing.