St. Joe's Prep's multi-talented McCray playing for two – himself and the 'hero' mom that raised him 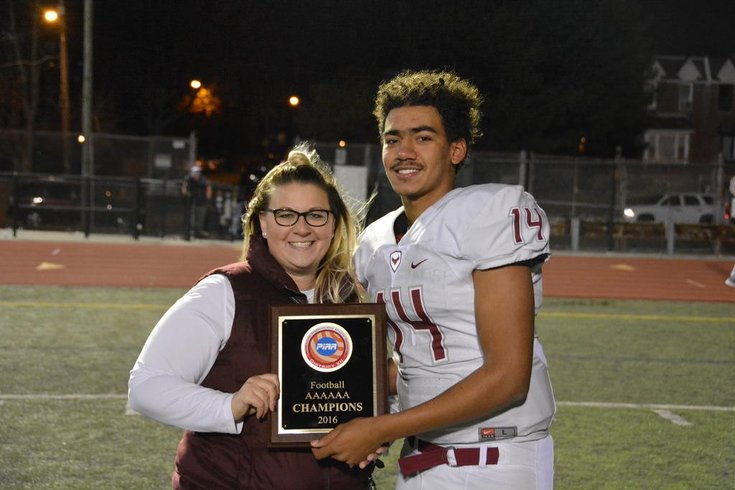 Some time this Saturday, during warmups or team stretches, he’s going to look up among the faces in the stands at Northeast High School, where St. Joseph’s Prep will play host in the PIAA 6A state quarterfinals to Parkland, last year’s state finalists, and Marquez McCray is bound to spot to her. He always does.

The Prep junior quarterback will give her a knowing nod and a grin — it’s his way of letting his mom, Jackie Dull, know he’s ready.

But I’m probably more proud of my mom. She raised me by herself. It’s always been me and her. ... She’s the one that’s opened this door and made this opportunity possible.

He’s a major reason why St. Joe’s Prep is one of the best high school football teams in nation, ranked No. 20 by MaxPreps.com, and why the Hawks are the standard of Southeastern Pennsylvania, undefeated at 11-0 and aiming for a third PIAA state championship in the last four years.

And until recently, McCray didn’t know he was living history on the way to making history — as the first starting African-American quarterback in Prep history, as far as anyone at the school knows, leading the Hawks to become possibly the first PIAA 6A state football champion in the new state classification system.

“It means a lot being the first black quarterback here at Prep, it’s something I’m very proud of,” said McCray, who’s 16. “But I’m probably more proud of my mom. She raised me by herself. It’s always been me and her. I don’t have a relationship with my father, and I realize that I do walk in two worlds. My mother is white and my father is black, but I’ve been really accepted by everyone here at Prep. I have a lot of fathers here with my teachers and my coaches. Definitely, coach [Gabe] Infante, coach [Tim] Roken and coach [Leo] Carlin. If I have any problems, I know I can always talk to them.

“When I got here, there was a much larger African-American population here than I thought. It made the transition much easier than I thought it would be. I’m an only child but I have my brothers on the football team and in this school. To me, I have two homes. This is my home away from home, and I have my mom. I think, though, it all starts with my mother. She’s the one that’s opened this door and made this opportunity possible.”

Teams can’t stack the line of scrimmage in attempting to stop Swift. They better be aware of McCray, or they’re going to get burned, as traditional North Jersey powerhouse Don Bosco Prep did earlier this season when McCray completed 16 of 24 for 186 yards and two touchdowns, and ran for a team-high 76 yards in the Hawks’ 35-24 victory.

"I used to get angry, not having my father around. I used to feel abandoned. I want a college scholarship, because it would be easier for her. The way I see it, I’m playing for two. I’m playing for my mom and me. She’s my hero every day."

Since Infante has been head coach at Prep, the team is far more racially diverse than it’s ever been. Because of Infante, the culture of St. Joe’s Prep as a whole has undergone a restructuring. The Hawks have also been highly successful under Infante, who’s won two state titles and had talented quarterbacks before, like Skyler Mornhinweg, the son of former Eagles’ offensive coordinator Marty Mornhinweg, as well as Chris Martin and Jack Clements, who’s now at Rutgers.

But Infante has never had an overall talent like McCray, who creates time for himself with his mobility and can throw the ball 75 yards in the air. Through 11 games this season, McCray has completed 114 of 197 passes for 1,706 yards and 18 touchdowns. When teams have stuffed the tackle box in trying to stop Swift, McCray has beat them with his arm.

Infante saw something in McCray to give him the keys to the offense.

And for anyone that knows Infante, it doesn’t matter what race a player is, even if they’re little green men from Mars, if they can play, he’s going to give them a chance.

"Marquez might get it from both sides. You’re not ‘black enough,’ or you’re ‘not white.’ We don’t talk about black or white here. ... We talk about football and life."

“It goes back to my personal story and my upbringing, I’ve always tended to relate very well to single-parent kids, because it’s a situation I know well being one of them,” Infante said. “I lost my father young and I was raised by my mother through high school. I know what it’s like for mom being both mom and dad, and how quickly it forces you to grow up. I know how cruel the world is. You see someone like Marquez, the world could be really cruel. A lot of our kids are kids like Marquez, poor, tough kids, who are willing to do three hours of school work and succeed — on and off the field. The mission of Prep is to educate kids from the city — all kids.

“Marquez might get it from both sides. You’re not ‘black enough,’ or you’re ‘not white.’ We don’t talk about black or white here. It’s not important to us. We talk about football and life. I can’t say enough about how strong Marquez is on and off the field. No one is picking up Marquez McCray in front of the school in a Mercedes Benz. His mother works three jobs and her sacrifice has made a better life for Marquez. But when you see his talent, and see how he’s developed, you see a very good quarterback who’s only getting better.”

So at 5:30 a.m. every weekday morning, Jackie will drop Marquez off at the train in Lansdale, Montgomery County, and he’ll make the trek down to Suburban Station where a car pool of Prep students will pick him up. And around 9 p.m. each night, McCray will trudge in the house dragging from football practice and another long day, and sit and eat dinner with his mom.

“Marquez is the most talented, physically able quarterback that I’ve ever had here,” Infante said. “He has better tools than any kid I ever had here, and no disrespect meant to Skyler, Chris or Jack. Marquez is a passer who can run, and he’s opened up our playbook, because of his ability to throw the football. He does a great job of making decisions. He’s made a giant maturity leap in a year, and it was frustrating last year, because he has the tools. Now this is his team — and he’s shown everyone what myself and our coaching staff saw.”

McCray is ready for the December heat of the state playoffs.

“Everything has slowed down for me on the field since the beginning of the year,” McCray said. “I’m ready for this. I used to get angry, not having my father around. I used to feel abandoned. I want a college scholarship, because it would be easier for her. The way I see it, I’m playing for two. I’m playing for my mom and me. She’s my hero every day.”