Matchups and trends to watch in Sixers vs. Warriors 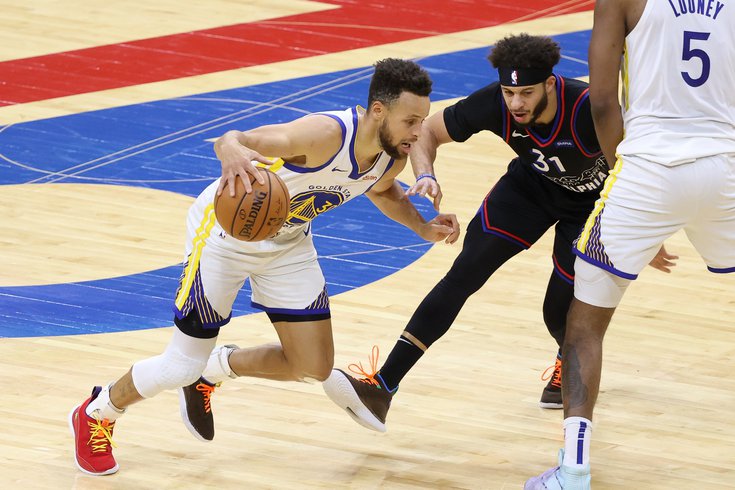 Stopping Steph Curry will be the Sixers toughing task out west.

Down Joel Embiid and with several other question marks in the starting lineup, Sixers-Warriors is not exactly the marquee matchup everyone would have hoped for to close out Philly's road trip. This is not a statement game, a litmus test, or a game that means much more in the standings beyond a single win or loss.

Even still, there are some important lessons and matchups that will test young Sixers players that are worth tuning in for.

For a second-year guard who is relatively undersized, Tyrese Maxey has held his own against a few high-level guards this season. During the team's early homestand, individual battles against Trae Young and Damian Lillard tilted in Maxey's favor, signs of the breakthrough he was about to make as opportunities became more plentiful.

Curry, though, is an entirely different beast. The two-time MVP is currently on pace to win (or at least threaten to win) the league's top individual honor again, driving the offense of the league's current best team. Golden State is a top-five unit on both ends of the floor up to this point in the season, and while the defense has been more of a collective effort driven by guys like Draymond Green, Curry's offensive impact is as high as any player's in the league, even when he's not actually getting the basketball.

The difference between Curry and the high-level guards mentioned higher up the page is his relentless off-ball movement. Yes, the Warriors are going to ask him to serve as the ballhandler in DHOs and pick-and-rolls with Green, but those are actions that Maxey has become a little more comfortable trying to guard. The trickier part is chasing him around mazes of screens, keeping up with a guy who knows every trick in the book to create separation away from the play.

Adding strength has helped Curry shrug players off easier on and off the ball, which has made defending him even tougher over the years. You want to stay up on Curry as much as possible, lest you just surrender open shots to the best shooter of all time, but that leaves players susceptible to being wiped out even harder by screens as they try to follow Curry through traffic.

As high up as Curry is on the scouting report, the Warriors still make an effort to disguise when they're going to try to get him a clean look from three. On occasion, they'll use him as a screener to free up a teammate for a cut, only to send another screener in Curry's direction as he explodes out of a standstill, getting open whenever there is hesitation from the defense.

This is a Warriors team with at least a couple of excellent big playmakers. Draymond Green is one of the best (if not the best) short-roll passer in the league, and former Sixers wing Andre Iguodala is a plus playmaker even as he approaches the end of his career. If Curry creates separation, somebody on this team is going to find him.

(A small bit of good news on that front: Iguodala will miss Wednesday's game as a result of swelling he's dealing with in his knee. One less good passer to worry about.)

Maxey is not going to be the only guy dealing with Curry on Wednesday night, and I would expect Matisse Thybulle to get some serious burn against the Warriors, defending Curry whenever he's on the floor. Defending Curry is a full-team effort, and executing switches and call-outs will be as important as Maxey staying vigilant himself. But this will be a great test for the young guy, assuming we see him spend at least some time on Seth's big brother.

Charles Bassey — drop or not?

Early in his Sixers career, the Sixers have not asked Charles Bassey to do much on defense aside from protecting the rim and dropping in pick-and-rolls. Depending on the matchup, that's a perfectly viable strategy, with Bassey's length and athleticism making life miserable for a lot of would be scorers in the painted area. If Bassey does nothing but drop against the Warriors, though, the Sixers are going to be drawing dead.

In limited action, we've seen the repercussions of Bassey sinking toward the rim when his man screens for a pull-up shooter. Their recent game against the Blazers showed what can happen if he's in auto-drop every time opponents put him in a pick-and-roll, and it's not often going to be pretty.

This is not a Bassey-only problem — Drummond had possessions against Portland where he made no effort to show high — but the difference so far is that he has basically shown no inclination to play up to the level in pick-and-rolls. Scouts have dinged Bassey for foot speed dating back to the amateur level, and even if he did show high against the Warriors, the worry then becomes that Curry would blow past him to either get a layup, draw a foul, or kick to an open teammate when the Sixers' defense collapses.

It's unlikely you need me to tell you what Curry can do if you back off of him in pick-and-roll coverage. When he tuned up the Brooklyn Nets on national television lately, Curry made shots even when Brooklyn played good defense, but attempts like these are basically a layup:

If it's any consolation, at least Curry is the only guy you really need to worry about as an on-ball threat to pull from deep. Jordan Poole has been a high-volume shooter for the Warriors this year, but he has run more cold than not, particularly when he's the guy on-ball, making just 24.2 percent of his pull-up three attempts this season.

Still, this is a game where some tweaks to the formula might have to be made. The Sixers have raved about Bassey's communication skills and everyone can see his physical talent when he's hounding guys around the basket, but they have to test his ability to defend in space at some point. If not, Curry will have a field day.

The Warriors have built up the league's best defense despite having a fair few guys in the rotation who aren't viewed as strong individual defenders. Green is a big part of that — he looks healthy as ever this season, trending back toward the peak version of himself that can blow up two-on-one opportunities and diagnose problems ahead of time, moving pieces on the board around with loud, boisterous talking in the back.

Green's leadership is constantly visible when you watch the Warriors play, and he demands his teammates hit a high standard and trust his clean-up ability on the back end. When Warriors teammates pick up fouls in spots where he feels he was in a position to help them, Green is not shy to reprimand them and remind them that he's there.

Golden State has not been shy throwing out exotic looks against opponents this season, busting out a triangle-and-two defense against the Nets at one point recently. But the key for Philly is going to be finding soft spots when the Warriors pass off players on switches, trying to eat up space whenever the Warriors give them a sliver of daylight.

If that sounds like a job for Maxey, you know ball. The second-year guard is going to have opportunities to beat the likes of Kevon Looney and Nemanja Bjelica off-the-dribble on Wednesday night, and those are battles you feel comfortable naming him a favorite in. The hard part is making the right decision once he gets past that first line of defense and meets Green in his wheelhouse inside the paint, where he presents a stiffer test than, say, Larry Nance Jr. or Richaun Holmes at the summit.

I would argue, however, that the window of opportunity is earlier than that, and relies on the screener's action as much as Maxey's decision-making. Slip-cutting against a switching opponent is perhaps the best way to punish teams who want to switch, fleeing the area and barreling toward the rim during the half-beat where the opponent is trying to get up to the ballhandler's level. Philly's two current bigs have both shown the ability to pass on the short-roll, and Bassey is an above-the-rim finisher who should be able to use the open runway to finish plays at the rim.

Half of the battle is finding them, and that's an area where Maxey is still finding himself at the moment. You'll have to throw some tight-angle passes through traffic to truly take advantage of the slip, and Maxey has trended toward safety and ball protection while showing much more adventurousness as a scorer.

If Maxey can keep up his scoring pace and continue to evolve as a passer, the Sixers might be able to make this one interesting. If not, reinforcements are on the way soon, and this game will serve as a lesson of where growth is needed.