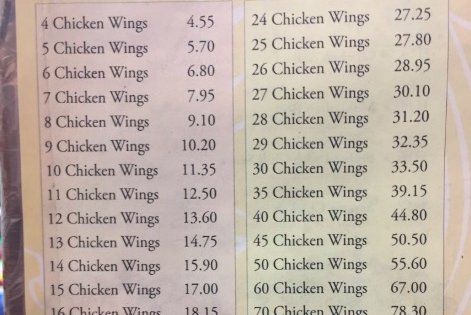 The wing menu at Danny's Wok is the subject of a viral Twitter discussion.

West Philly Chinese food restaurant Danny's Wok is the subject of a new Twitter debate after a photo of the spot's wing menu – and its seemingly illogical price points – went viral.

One Facebook user posted a photo of the menu, which has pricing for party trays up to 400 wings.

The menu and the pricing reflect an unusual and still unscrutable pattern. The mystery soon ensconced many on Twitter who set out to bring rhyme and reason to the menu, and to better determine which price offered the best deal.

Did they succeed? Well...

Purchasing 200 wings instead of 4 brings the per-unit cost down by less than two full cents.

It's cheaper to order 50 wings + 10 wings than it is to order 60 wings! Aaaaaaarghhhhh

Then came the spreadsheets.

Here's a spreadsheet where I extrapolated the prices of 1-3 wings, then tracked the difference by subtracting the price of the last multiple of 25 (in column C). You can see the deviation when it hits 75 compared to 50, then continue tracking the deviations as I laid them out. pic.twitter.com/Se7RrypOym

And the full-on ALGORITHMS.

This is about as good as I could get it.
# 24 is very strange, and it's hard to predict what happens once they go in leaps of >1, but this formula works up to 50.
The approach is basically defining everything under 24, everything over 24, and 24 individually. pic.twitter.com/szaIcbaJQB

ERRATA: Formula 1.1 of our preprint contained a typographical error. the intermediate result of the computation should be rounded up to the nearest integer, instead of down (https://t.co/qb1t5qDxEB) pic.twitter.com/Mw5XXHh4bW

Though it seems impossible to crack the code on why the wings were priced this way, one user at least was able to summarize the best deal available: if you're ordering less than 25 wings, choose multiples of three for the best cost-per-wing unit.

Also, not to add more confusion, but the pricing on the menu online is also different. Guh.