Right now it's only place you can get a Schmitter 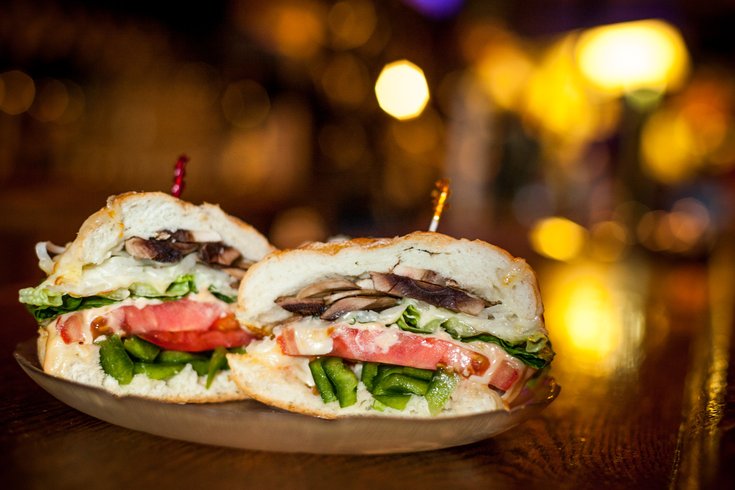 'The G.B.S' (George Bernard Shaw) 3 cheeses: Swiss, American, and provolone melted on top of green peppers, onions, mushrooms, and tomatoes. Topped with fresh romaine with house made 'Schmitter Sauce' on a kaiser roll.

There are certain well-known places in our fair city where the simple act of getting a sandwich requires thick skin. If you make the mistake of ordering a cheesesteak in the pork line at John’s Roast Pork the no-nonsense staff will send you sulking back to the end of the (correct) line. At Pat’s, the large-print signage breaks down the ordering process into four simple steps — but fails to tell you to order fries and drinks at the other window. Do it wrong and you’ll hear about it.

If all of this ceremonial sandwich-related gruffness gives you agita, rest assured that there’s another bucket list Philadelphia sandwich spot were ordering is a breeze, service comes with a smile (and a seat) and they even take credit cards.

Located on the far end of Germantown Avenue McNally’s, the family-run tavern best known for the Schmitter — its over-the-top and trademarked take on the cheesesteak. It’s a monster of a sandwich that begins with a freshly baked kaiser roll from Conshy bakery piled high with freshly sliced beef, lots of gooey cheese, fried onions, griddled salami and tomatoes topped off with a swipe of (also trademarked) sauce that closely resembles Russian dressing.

Named for a longtime customer with a taste for Schmidt’s beer and created by original owner Hugh McNally, the Schmitter is a beautifully balanced, manageably sized and full of the sort of meaty, tangy and fresh elements that make it infinitely crave-able. For years, you could buy it at Citizens Bank Ballpark — and a return seems likely — but for now the only place you can get one is at the Chestnut Hill location. Still, the Schmitter is only the beginning of the McNally’s story.

Sitting at a dimly lit table in the back of the dimly lit tavern, third generation owner Anne McNally explains that this family affair began as a luncheonette. Her great-grandfather, Hugh drove the number 23 trolley up and down the avenue and back in those days there wasn’t even a place to grab a coffee in Chestnut Hill. If you didn’t brown-bag it you were pretty much out of luck.

So Hugh and his wife Rose opened a lunch counter and then expanded the operation across the street to a full-fledged tavern after the end of Prohibition. But even with a full liquor license McNally’s has done the bulk of its business in food.

“We’re really a sandwich place that [serves] beer,” says Anne McNally who began working at the tavern in 1979. 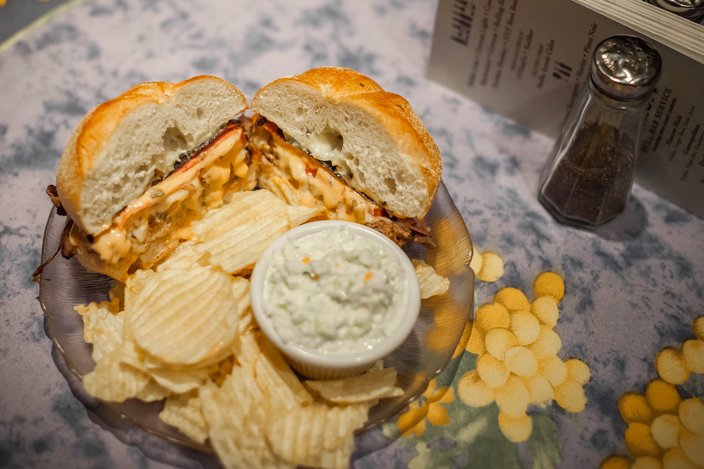 Today the two-sided paper menu is full of nods to the tavern’s history. The G.B.S. is a nod to her father’s favorite play-write, George Bernard Shaw. The ‘Pygmalion’ playwright was a vegetarian, and his namesake sandwich combines Swiss, American and provolone cheeses with mushrooms, green peppers, onions, tomatoes and romaine with Schmitter sauce.

“Some people get their vegetables grilled and some get them raw which is a little bit healthier,” McNally explains. While you can certainly get your G.B.S. on a kaiser, McNally offers the option of a seeded multigrain roll from nearby Baker Street Bread Co. and she’s more than happy to have her gluten intolerant clientele bring in their own rolls. Just think about attempting that in Cheesesteak Vegas and you’ll get laughed out of town.

Although kitchen space at McNally’s is limited to a tiny griddle and oven operation at the far end of the bar and a cold prep kitchen in an upstairs apartment, that doesn’t stop the restaurant from cooking two 40-plus pound turkeys daily. These full birds from Koch’s Farm in Tamaqua, Pennsylvania, are broken down for a year-round Thanksgiving-inspired sandwich called the Dickens with cranberry sauce and house-made stuffing, along with turkey salad, burgers, chili and a roster of rotating soups made using the picked over turkey bones. Pulling out the birds around 1 p.m. every day, regulars sometimes stop in for an off-the-menu drumstick lunch.

The menu is supplemented with a monthly line-up of soup, sandwich, salad and dinner specials, all of which have their own devoted fanbase that makes the pilgrimage to Chestnut Hill for favorites like chicken corn chowder and cream of broccoli.

Along with a staff that’s made up of affable folks who have been working at McNally’s for 30 plus years, regulars here are bread and butter. Although it might be straight out of another era McNally’s has house accounts where people can come in, order and receive a bill at the end of the month, a situation that works particularly well with local families whose kids like to stop by for a bite. It’s the kind of place where generations of families convene and the staff welcomes them with open arms. 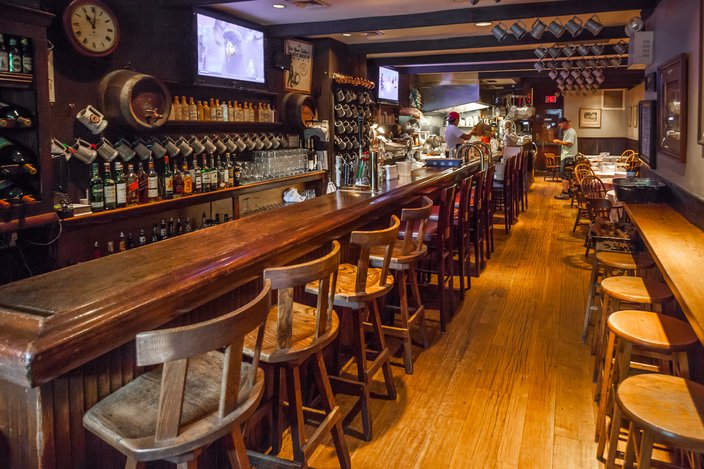 “We have a guy named Harry,” Anne McNally says, describing a gentleman in his late-80s who has been coming here for years. These days he takes a cab to McNally’s for lunch once a week: a soup and sandwich special or liverwurst and onions, always with an imperial pint of Lagunitas IPA. “He’s the first customer here at 11:02 in the morning.”

Although they might not get the press that the Schmitter does, McNally’s cakes are a particular point of pride.

Meg McNally took over the baking from her mother after her sister Anne came back from a visit to Mendocino, CA’s beloved Cafe Beaujolais raving about their chocolate cake. Intrigued, Meg set out to recreate it. She also came up with the carrot and coconut cakes that McNally’s is known for today. Baked daily in home-kitchen-sized 9-by-12-inch pans, the cakes have a tendency to sell out quickly prompting regulars to reserve their dessert before ordering dinner.

Baked daily in home-kitchen-sized 9-by-12-inch pans, the cakes have a tendency to sell out quickly prompting regulars to reserve their dessert before ordering dinner.

While some things have changed over the years, McNally’s retains an air of sameness that’s refreshing. Anne, Meg and several family members and friends of the McNally’s are always on the floor and the kitchen reflects that same warmth when it comes to cooking.

“Lizanne makes each sandwich like it was for herself,” explains McNally of a staff member who has been cooking for more than 30 years. “And I say ‘Really? Let’s just put seven pieces on bacon on those BLTs, not nine!’ But it’s all good.” 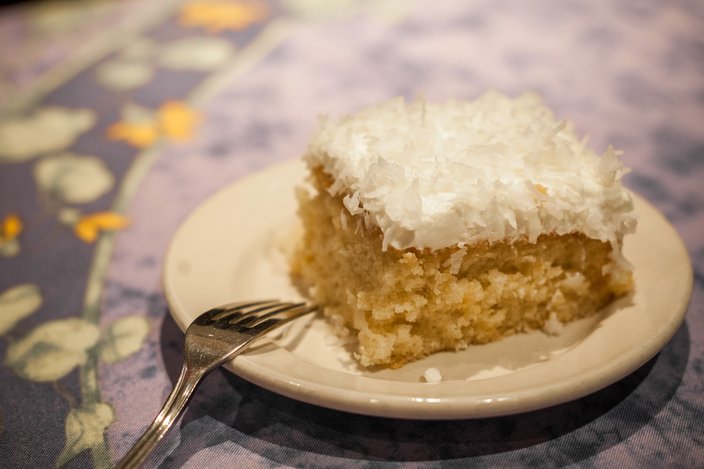